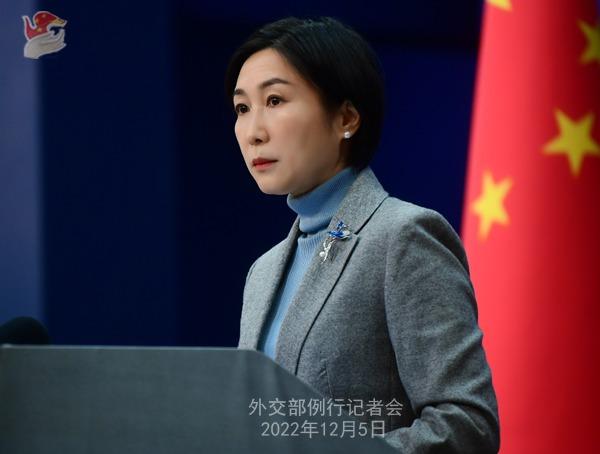 Mao Ning, spokesperson for China’s Ministry Of Foreign Affairs, speaks at a press conference at the ministry in Beijing, China, on Dec 5, 2022. (PHOTO / FOREIGN MINISTRY, CHINA)

BEIJING – China’s foreign ministry has stressed that cooperation between the United States and Europe should not target any third party.

Ministry spokesperson Mao Ning said this at a regular press briefing on Monday when asked to comment on accusations launched against China coming out of the fourth high-level meeting of the US-EU Dialogue on China earlier this month.

READ MORE: What is the China-West rivalry really all about?

"China firmly rejects the US and the EU's interference in China's internal affairs and smears against China," she said in response.

If anyone wants to discuss economic coercion, the US has publicly coerced countries to stop using equipment made by Chinese companies and halt cooperation with China.

While the US and the EU say they will focus on "protecting the centrality of the UN Charter", it is the US and some European countries that have ignored principles in the UN Charter such as the peaceful settlement of international disputes and no interference in countries' internal affairs, and have interfered in China's internal affairs and even waged wars against sovereign countries like Iraq and Syria in the name of human rights, said the spokesperson.

"If anyone wants to discuss economic coercion, the US has publicly coerced countries to stop using equipment made by Chinese companies and halt cooperation with China.”

The US has introduced the CHIPS and Science Act, engaged its allies in economic bullying against China and sought to decouple from China and cut China off supply chains, she said.

The US's Inflation Reduction Act forces European companies to relocate their production lines to America. All of those are defining examples of economic coercion, added Mao.

US-EU cooperation should not target any third party, seek to make an issue of China or stoke confrontation, she said.

As major forces in the world, the US and the EU need to demonstrate responsibility and do more things that are conducive to world stability and prosperity, she added.