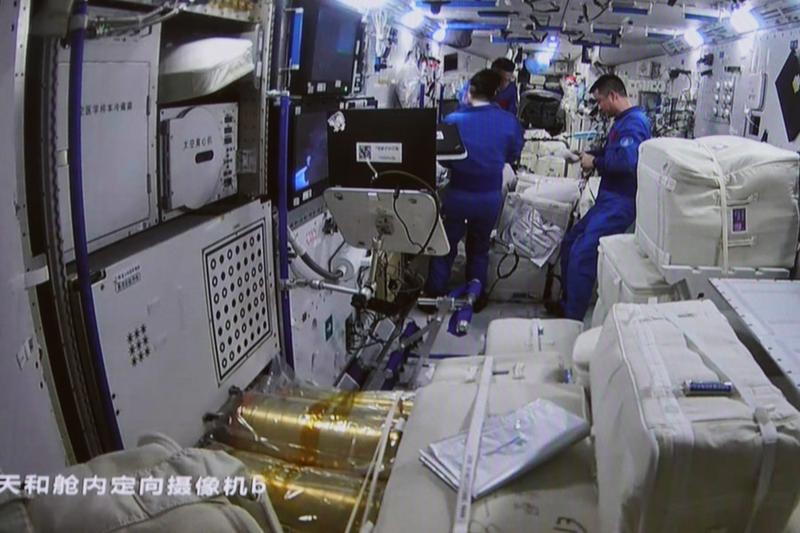 This screen image captured at Beijing Aerospace Control Center on Nov 12, 2022 shows the inside view of the core module Tianhe after China's cargo spacecraft Tianzhou-5 conducting a fast automated rendezvous and docking with the combination of the space station Tiangong. (PHOTO / XINHUA)

China's Shenzhou XIV manned spaceship separated from the space station combination on Sunday, and the astronauts onboard, Chen Dong, Liu Yang and Cai Xuzhe, will soon start their journey home, according to the China Manned Space Agency.

The agency said on Saturday morning that the Shenzhou XIV astronauts handed over on Friday evening the control of the Tiangong station to their peers in the Shenzhou XV -- Major General Fei Junlong, Senior Colonel Deng Qingming and Senior Colonel Zhang Lu, who arrived on the massive orbiting outpost on Wednesday.

During their six-month journey, they monitored the arrival of the Wentian and Mengtian space lab modules, which completed the Tiangong's in-orbit assembly

In a ceremonial move, the two teams signed a handover document and the Shenzhou XIV crew gave a symbolic unlocking key to the Shenzhou XV team.

Chen and his crew mates are scheduled to fly back aboard their Shenzhou XIV spacecraft to the Dongfeng Landing Site in the Inner Mongolia autonomous region on Sunday evening, according to the Jiuquan Satellite Launch Center in northwestern China that manages the landing site.

The center said on Saturday that recovery workers are getting ready for the crew's return.

The Shenzhou XIV astronauts arrived at Tiangong on the evening of June 5, several hours after their spacecraft was launched from the Jiuquan center. The crew is the third group of visitors to the Chinese station, one of the largest pieces of infrastructure mankind has ever deployed in Earth's orbit.

During their six-month journey, they monitored the arrival of the Wentian and Mengtian space lab modules, which completed the Tiangong's in-orbit assembly. They also carried out three spacewalks and delivered a science lecture to Chinese students.

Chen now holds the record for the longest in-orbit time of a Chinese astronaut after spending a total of 214 days on two space missions.

Currently, the Tiangong station consists of the Tianhe core module, the Wentian and Mengtian lab modules, the Shenzhou XIV and XV spacecraft and the Tianzhou 5 cargo ship.