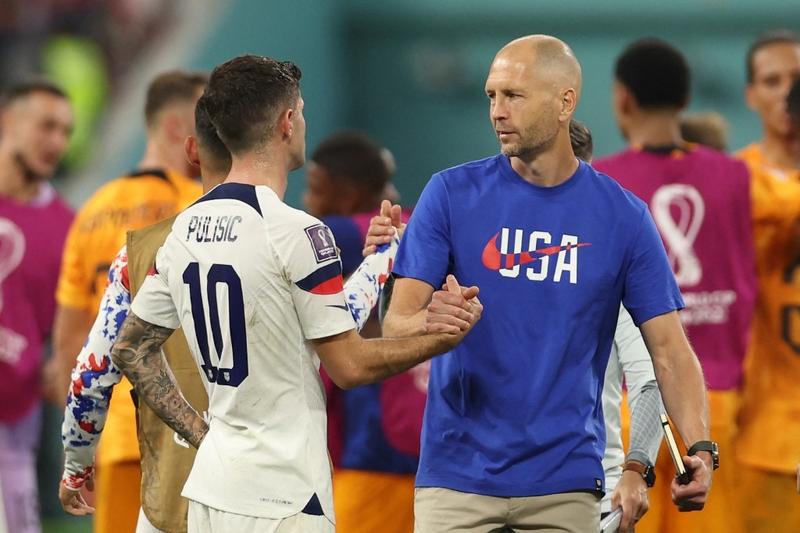 USA's forward Christian Pulisic and USA's coach Gregg Berhalter react at the end of the Qatar 2022 World Cup round of 16 football match between the Netherlands and USA at Khalifa International Stadium in Doha on Dec 3, 2022. (ADRIAN DENNIS / AFP)

DOHA – USA national team coach Gregg Berhalter hailed the progress his side have made in recent years, despite their exit from the World Cup after a 3-1 defeat to the Netherlands in the round of 16 on Saturday.

The USA side never stopped trying, but were undone by two first-half goals from Memphis Depay and Daley Blind, and a late volley from Denzel Dumfries as they were chasing an equalizer.

"I'm really proud. When you think about this group, how they've come together in the last three and a half years, you don't often get a bond like that," said Berhalter, whose side is now ranked 16th in the world.

"The guys put everything they have into it. We are such a good group that you want more for them," he commented.

ALSO READ: Netherlands move to WC knockout stages with 3-1 win over US

"You have to give credit to the Netherlands for the quality to take their chances: their first attack ended in a goal. That is what happens at this level," continued Berhalter, who believed that his side had partially fulfilled their aims.

"We set out with a goal to show the rest of the world how to play soccer and we partially achieved that, although we fell short of our goals," he admitted with half an eye on the future, with the United States jointly hosting the 2026 World Cup along with Canada and Mexico.

"Can we win against top teams? I think this group is close. We have fielded the youngest line-up in the World Cup and the American public should be optimistic," he concluded.

USA keeper Matt Turner admitted that defensively it had not been the best night for his side.

"We were allowing balls into the box and not tracking runners. It was a tough night overall defensively," he said, adding that the third Dutch goal "took the steam out" of any fightback.