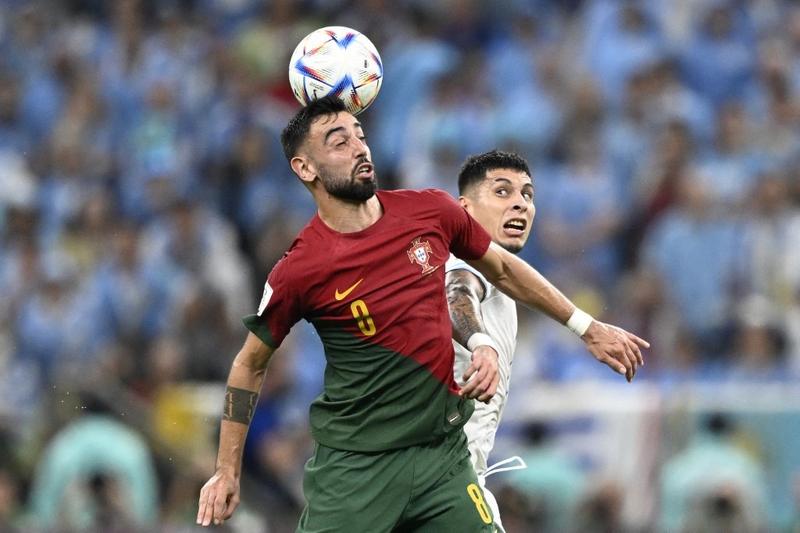 LUSAIL, Qatar- Portugal's Bruno Fernandes has long played second fiddle to team mate Cristiano Ronaldo but on Monday he stepped out of the superstar's shadow by scoring two goals to steer his team past Uruguay and into the World Cup Round of 16.

The 28-year-old's career has been inextricably linked to Ronaldo, having played for Sporting, the club where his Portugal captain started his illustrious career before moving on to bigger things.

Fernandes does not possess the speed, power or goal-scoring prowess of CR7 but he did what was needed to get Portugal through in a game where Ronaldo huffed and puffed but failed to get on the score sheet

He then moved to Manchester United in 2020, another club where CR7 had left his mark in the past. Having developed into a key player for the English side, the Fernandes then saw Ronaldo return last year to once again hog the spotlight.

Fernandes does not possess the speed, power or goal-scoring prowess of CR7 but he did what was needed to get Portugal through in a game where Ronaldo huffed and puffed but failed to get on the score sheet.

Fernandes' whipped cross flew past Ronaldo's head and into the back of the net even though his more celebrated team mate initially claimed the goal for himself.

He then added another with a second half stoppage time penalty before rattling the post seconds later in his attempt for a hat-trick.

The biggest cheers throughout the game were reserved almost exclusively for Ronaldo from the fans in the 88,0000 capacity Lusail stadium.

Fernandes, however, left the pitch a happy man, knowing on the biggest of international stages there were now two big names in the Portuguese squad.

Whether at Sporting or at United, Fernandes was condemned to playing a supporting role to Ronaldo even though he is among the highest scoring midfielders in Europe.

"It was a dream come true to play with Cristiano.. but nothing lasts forever," he said at the time with a video of their icy encounter at the Portugal team base ahead of the World Cup quickly becoming viral.

A playmaker with sublime skills, great touch and eye for goal, Fernandes led them to their second win in their World Cup group, which they had previously achieved only twice before, in 1966 and 2006. Both times they reached the tournament's last four.

Playing in his second World Cup, compared to Ronaldo's fifth, Fernandes will be hoping it will also be Portugal's most successful one.