Casemiro provides spark to put Brazil through to last 16 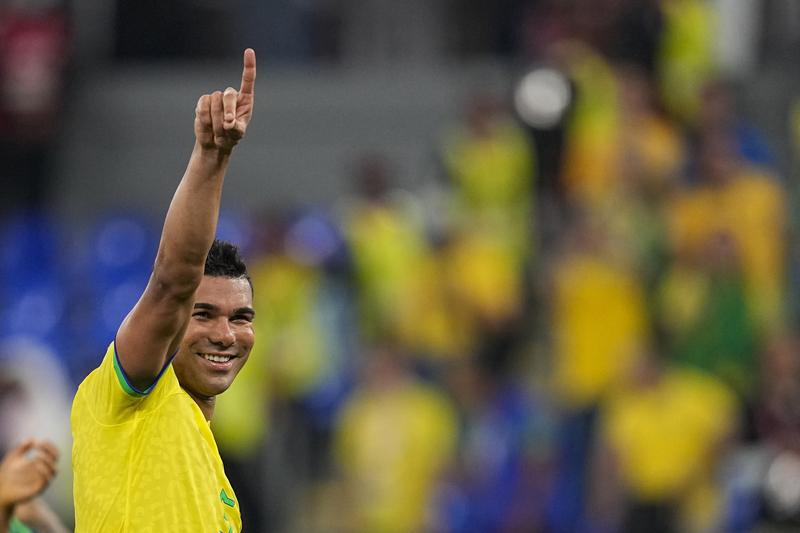 Brazil's Casemiro celebrates at the end of the World Cup group G soccer match between Brazil and Switzerland, at the Stadium 974 in Doha, Qatar, Nov 28, 2022. Casemiro scored once in Brazil's 1-0 victory. (ARIEL SCHALIT / AP)

DOHA - Brazil defensive midfielder Casemiro took a break from putting out fires to score a scorching goal that sent his side into the last 16 of the World Cup with a 1-0 win over Switzerland in their Group G clash at the 974 Stadium on Monday.

Brazil top the group on six points, three ahead of the Swiss and five ahead of Cameroon and Serbia, who they face in their final group game

Casemiro's late goal won him the man of the match award and spared Brazil's blushes after a scrappy performance that saw them hit plenty of loose passes before he struck his brilliant finish seven minutes from the end of normal time.

"It is very clear that my very first objective is to support the team...to put out fires wherever they may be. But nevertheless, if there is an opportunity to take a little shot on goal, I think that's very important," the 30-year-old told a news conference.

Casemiro smiled as he spoke about the win and the goal but he was in no hurry to take all the credit for himself, despite scoring the match-winner.

"Regardless of the goal scored, I think it's very important to have helped the team, when we win, we all win together, when we lose, we all lose together," he said.

Just before the new conference, injured team-mate Neymar tweeted: "Casemiro has been the best midfielder in the world for a long time". Coach Tite made an exception when asked if he agreed with that sentiment.

"I always respect other opinions and I usually don't comment on them, but I'll allow myself to do so today - I agree," the coach, who played as a midfielder himself, told reporters.

Brazil top the group on six points, three ahead of the Swiss and five ahead of Cameroon and Serbia, who they face in their final group game.

"We have to reassess the physical condition (of the players) with physicians and medical staff and then yes, we'll think about what will happen, but today we must enjoy the win," Tite said.