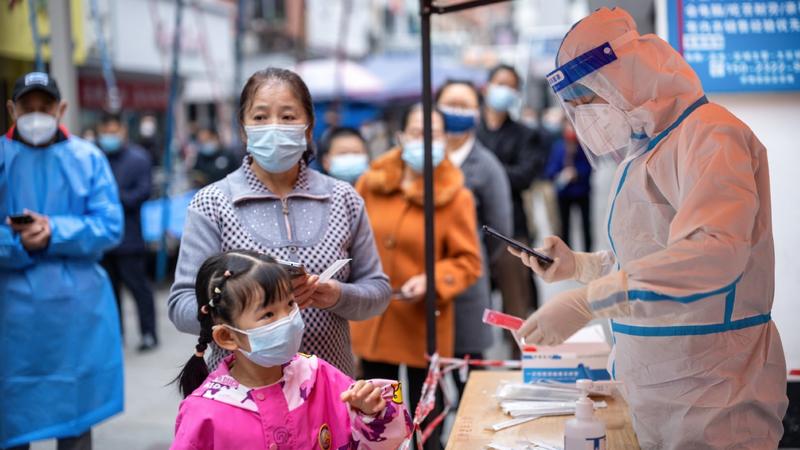 Residents line up to take the nucleic acid tests in Chongqing, China, on Nov 22, 2022. (PHOTO / THE PAPER VIA CHINA DAILY)

The State Council's Joint Prevention and Control Mechanism has reiterated its commitment to cracking down on COVID-19 control malpractices, and urged localities to rectify improper implementation of the 20 new adjusted measures announced recently, China Central Television reported on Saturday.

The State Council's Joint Prevention and Control Mechanism said that some local governments have been found to either roll out overt measures such as ordering widespread lockdowns or take a lax attitude toward the disease, and both tendencies are wrong

The mechanism said that some local governments have been found to either roll out overt measures such as ordering widespread lockdowns or take a lax attitude toward the disease, and both tendencies are wrong.

The issue of imposing additional COVID-19 restrictions, as well as other problems that have emerged following the release of the 20 measures on Nov 11 must be firmly addressed, it added.

Wang Liping, a researcher at the Chinese Center for Disease Control and Prevention, said that these new measures have not only required local officials to cope with local outbreaks in a more scientific manner, but also guided them to be more considerate in enforcement.

As domestic outbreaks are spreading fast and widely, Wang said the key to reining in infections is promptly and precisely detecting infections in communities, tracking down close-contacts and designating at-risk areas during the initial phase of a new outbreak.

"Epidemiological investigators, transporting staff and nucleic acid testing personnel should cooperate and exchange information, so as to grab the golden window of opportunity of 24 hours to prevail over the virus," she said.

She stressed that after completing one round of mass testing in a region, disease control workers must wait until at-risk people are transported away before launching the next round.

The National Health Commission and the National Administration of Disease Prevention and Control have dispatched working groups to urge and guide localities to unswervingly and strictly implementing the latest and ninth COVID-19 control protocol and the 20 measures, as well as taking more resolute measures to curb rising infections, she added.