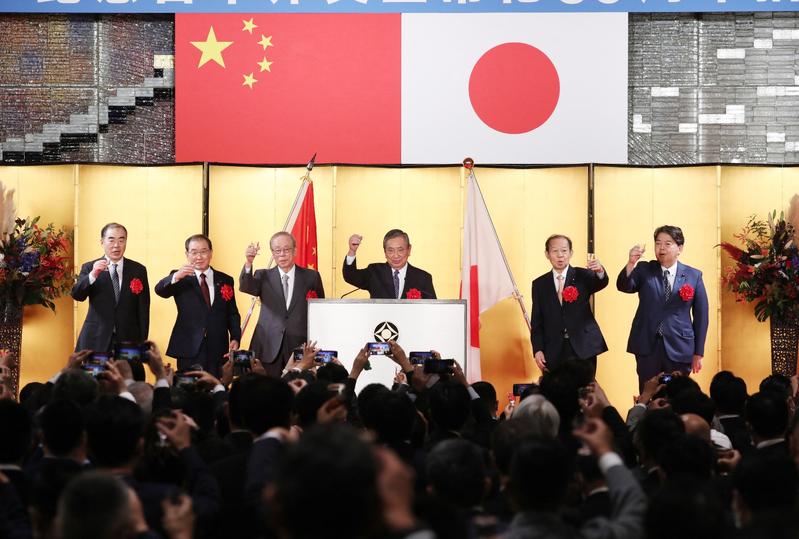 Guests make a toast on Thursday at a reception in Tokyo commemorating the 50th anniversary of the normalization of China-Japan diplomatic relations. Among them are Chinese Ambassador to Japan Kong Xuanyou (left), former prime minister Yasuo Fukuda (third from left) and Japanese Foreign Minister Yoshimasa Hayashi (right). (JIJI PRESS / AFP)

Leaders of China and Japan highlighted the need to further build on two-way relations on Thursday as the countries celebrated the 50th anniversary of the normalization of their diplomatic relations.

Honoring a commitment to amity and peace and valuing the spirit of shelving differences are key to maintaining good relations between the world's second- and third-largest economies afloat, officials and leading scholars said.

On that day 50 years ago, the leaders of the two countries evaluated the trend of the times, acted with foresight and insight and made the major political decision to normalize the two countries' diplomatic ties, ushering in a brand-new chapter in bilateral relations, Xi said.

With the joint efforts of the two governments and their people, the two sides agreed upon four landmark political documents and a series of key consensuses, and their exchanges and cooperation in various fields have been deepened, to the great benefit of the two nations and their people and contributing to peace and development in the region and the whole world, Xi added.

Xi stressed that he attaches great importance to the development of China-Japan relations and said he is ready to work with Kishida to lead the two sides to take the anniversary as an opportunity, follow the trend of the times and jointly work on building China-Japan relations that meet the needs of the new era.

In his message, Kishida noted that the leaders of the two countries initiated a new historical process of Japan-China relations 50 years ago by upholding strategic thinking and political courage.

The two countries have made remarkable progress in a wide range of areas for cooperation, including economy, culture and the exchange of visits, Kishida said.

It is of great significance for the two sides to join hands in creating a new future of Japan-China ties, and Tokyo is ready to work with Beijing to envision the next 50 years, push for building constructive, stable Japan-China ties and jointly promote peace and prosperity of the two countries, the region and the world, he added.

Li said the two countries are geographically close to each other and culturally connected, and they are both important countries in the region and the international community.

Beijing is willing to work with Tokyo on peace, friendship and coexistence, champion the political basis of the two countries' relations, deepen exchanges and collaboration in various fields, and properly handle and manage divergences and differences, Li said.

China is also willing to take the 50th anniversary as a new starting point to push for further sound and steady progress in China-Japan relations, he added.

By exchanging messages, the leaders from both sides "envision and chart a course for the future growth of the two countries' relations", Foreign Ministry spokesman Wang Wenbin said at a news conference on Thursday.

Kong Xuanyou, Chinese ambassador to Japan, said that over the past 50 years, annual bilateral trade between China and Japan has increased from $1 billion to more than $370 billion.

The relations' remarkable progress and the great benefits reaped prove that "differences in ideologies and social systems are not necessarily unsurpassable gaps, and long-term peace, friendship and cooperation are the only right choice for both sides", Kong wrote in an article published on Thursday in People's Daily.

Cheng Yonghua, a former Chinese ambassador to Japan and now the executive vice-president of the China-Japan Friendship Association, said the two countries are "neighbors who cannot move away from each other", and "the importance of their relations will not be changed no matter how one views another".

"The two countries' relations over the past 50 years have not always been rosy and smooth, but the outcomes are fruitful and remarkable, and they deserve to be cherished," he said.

"I hope that people in all walks of life in Japan can realize that working together with China toward the same goal and championing the friendly cooperation between them are beneficial to the two countries, to their people and to the prosperity of Asia and the world," he added.

Yang Bojiang, director-general of the Chinese Academy of Social Sciences' Institute of Japanese Studies, said the common ground between the two nations includes that they both subscribe to peace, international cooperation, openness to the world market and steady development of bilateral ties.

Summarizing the past successful practices in preserving good relations, Yang said "it is key to make sure peace and collaboration dominate the big picture", and the two sides "should further work on seeking common ground while shelving differences".

Former Japanese prime minister Yukio Hatoyama said that 50 years ago, leaders of the two countries reached an important consensus on properly handling sensitive topics such as the Taiwan question.

The two sides should stay true to these consensuses, properly handle contradictions and differences, and promote the continuous development of friendly and cooperative Japan-China relations, Hatoyama said at an event in Japan on Wednesday marking the anniversary.