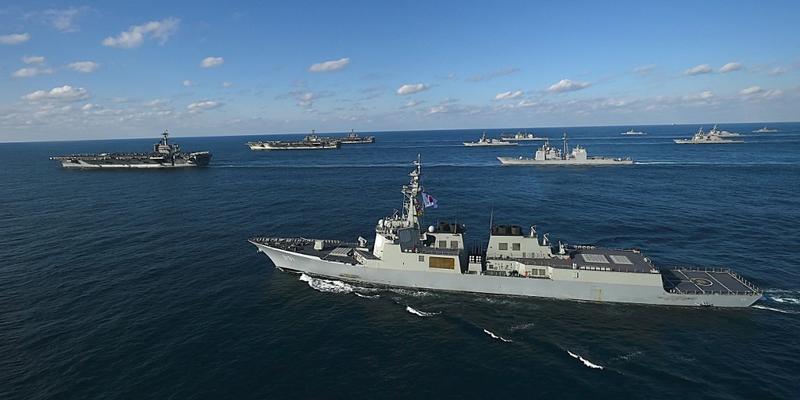 SEOUL - The naval forces of the Republic of Korea, the United States and Japan staged trilateral anti-submarine exercises for the first time in five years on Friday, amid tension over the Democratic People’s Republic of Korea's series of missile tests.

The drills were held in international waters off the Korean peninsula's east coast, just a day after the DPRK fired two ballistic missiles into the sea off its east coast and US Vice-President Kamala Harris visited Seoul and the heavily fortified border between the two Koreas.

Thursday's test was the third such launch in five days by DPRK, which has fired an unprecedented number of missiles this year.

The anti-submarine drills have not been conducted since 2017 because the former progressive ROK government sought to improve inter-Korean relations and facilitate denuclearization talks between Pyongyang and Washington, which have stalled since 2019

"The exercises are designed to improve their capability to respond to increasing North Korean submarine threats, including its submarine-launched ballistic missiles (SLBM) at a time when it consistently poses nuclear and missile threats with a series of ballistic missile tests," the ROK navy said in a statement. The DPRK is also referred to as North Korea.

The US navy said the drills will enhance inter-operability and tactical and technical coordination between the three countries.

The anti-submarine drills have not been conducted since 2017 because the former progressive ROK government sought to improve inter-Korean relations and facilitate denuclearization talks between Pyongyang and Washington, which have stalled since 2019.

ROK's new President Yoon Suk-yeol, who took office in May, has vowed to boost trilateral security cooperation with the United States and Japan to better counter DPRK's evolving weapons threats.

The drills came days after a US-based think tank said DPRK may be preparing to launch a new submarine believed to be capable of firing ballistic missiles, citing commercial satellite imagery.

ALSO READ: Top US commander for keeping rocket launchers at Japan base

ROK's military has also detected signs that the isolated country might be gearing up for an SLBM test, Yonhap news agency reported on Saturday. A military spokesman declined to confirm the report but said it is closely monitoring DPRK's submarine bases and activities.

ROK and its allies are also concerned that DPRK is about to conduct a nuclear test – which would be the seventh since 2006 and its first since 2017.

ROK’s lawmakers briefed by the country's spy agency said on Wednesday that DPRK has completed preparations for a nuclear test and a possible window for carrying it out could come between Oct 16 and Nov 7.