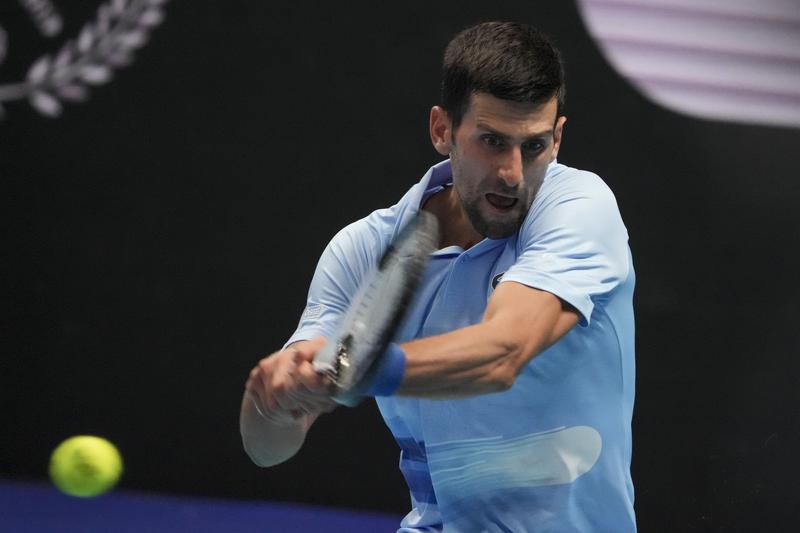 Top-seeded Novak Djokovic looked sharp in his first ATP match in 2 1/2 months as he rolled to a 6-0, 6-3 win over Spain's Pablo Andujar on Thursday to reach the quarterfinals of the Tel Aviv Open in Israel.

The Serbian has eight aces among 29 winners and committed just eight unforced errors in his first tour match since winning Wimbledon on July 10. Djokovic broke Andujar's service four times during the 87-minute match.

Djokovic was unable to play on the recent US hardcourt circuit and missed the US Open due to his COVID-19 vaccination status. Djokovic next faces Canadian lucky loser Vasek Pospisil, who cruised to a 6-3, 6-2 win over Israeli qualifier Edan Leshem.

Among other matches, Arthur Rinderknech of France had 35 winners and saved a match point during a 6-3, 2-6, 7-6 (7) win over third-seeded Diego Schwartzman of Argentina

Among other matches, Arthur Rinderknech of France had 35 winners and saved a match point during a 6-3, 2-6, 7-6 (7) win over third-seeded Diego Schwartzman of Argentina.

Huesler won 89.2 percent of his first-serve points while pulling off the stunning win. He will next face Poland's Kamil Majchrzak, who beat eighth-seeded German Oscar Otte 4-6, 6-2, 6-4.

Top-seeded Casper Ruud of Norway had 18 winners against seven unforced errors while fighting for a 6-2, 3-6, 6-3 win over Chilean qualifier Nicolas Jarry to reach the quarterfinals in Seoul.

Jarry had a 13-6 edge in aces as well as 35 winners against 22 unforced errors. Ruud, who qualified for the Nitto ATP Finals with the win, will next face Japan's Yoshihito Nishioka, who beat countryman Taro Daniel 6-2, 6-4.