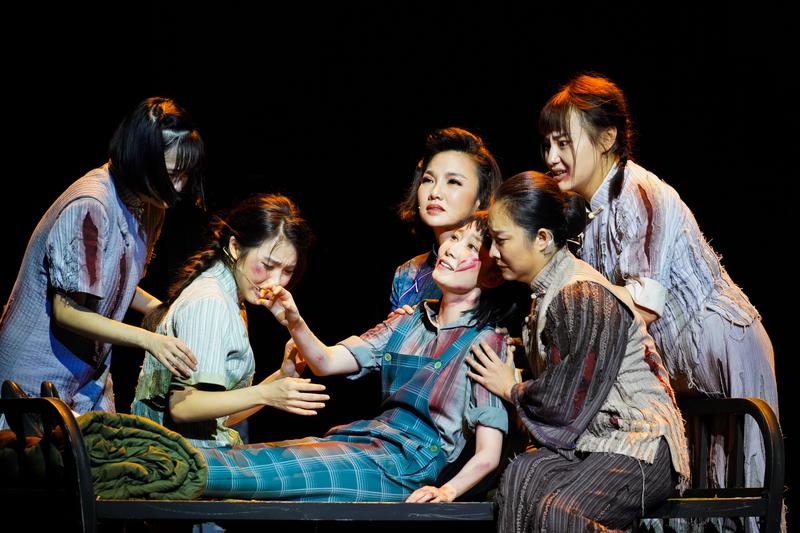 A scene from Chinese musical Jiang Jie, which is based on the story of the female martyr Jiang Zhuyun, and premiered in Beijing on Friday. (PHOTO PROVIDED TO CHINA DAILY)

The story of Jiang Jie is well known in China. The female martyr, whose real name was Jiang Zhuyun, was born in 1920 in Southwest China's Sichuan province and joined the Communist Party of China when she was 19. She was arrested in 1948 and detained in a Chongqing prison. A year later, she was killed. She was 29.

Chinese people of various generations know her stories from the classic novel Hong Yan (Red Crag), which, written by Luo Guangbin and Yang Yiyan, portrays a group of underground Communists and their heroic battle on the eve of 1949, when the People's Republic of China was founded. In 1964, Jiang's story was adapted into a Chinese opera, titled Jiang Jie, which was a huge success and toured nationwide.

For the first time, Jiang's story has been turned into a musical. Premiered at the new theater of the China National Opera House in Beijing on Friday, the musical, also titled Jiang Jie, won warm feedback from the audience. As the first musical produced by the Beijing Film Academy, Jiang Jie was staged at the venue from Friday to Sunday.

The musical follows the days that Jiang spent in a prison in Chongqing before she died.

"From the stage set to the songs, everything gave birth to a new 'Jiang Jie', which is very exciting," says singer Wang Li, who plays the role of Jiang in the musical.

The classically trained singer won a top national musical award in 2007, which allowed her to play the role of Jiang Jie in the classic opera version. Since then, she has played the role more than 100 times.

"We keep the classic image of Jiang in the musical, with hair down to her shoulders and in a blue cheongsam. I lost 10 kilograms in one month to have a convincing look as Jiang, who went through torture in prison for more than 500 days before she was killed," Wang adds. "The rehearsals were intense, and for me, the musical is very new and challenging."

Wang Yixun, director of the musical, who also teaches at the musical department of the Beijing Film Academy, says the art form has taken on Chinese characteristics. "Like opera," Wang says, "musical is also a Western art form. As it takes roots in China, the genre has gained a large fan base and has developed with a Chinese style that includes music and dance.

"Jiang, besides her heroic spirit," Wang adds, "was a woman who loved life. We also portrayed her friendship with other underground Communists who were detained in the prison, as well as her love for her husband, who was killed by the enemy, and how she missed her son, who was separated from her for a long time."

An Dong, head of the musical department of the Shanghai Conservatory of Music and veteran composer Cheng Qifeng, wrote about 30 songs for the musical, which features a diversity of music styles, such as pop, rock and classical. One of the most famous songs from the Chinese opera Jiang Jie, Hong Mei Zan (Ode to the Red Plum Flower), was adapted into a new version in the musical, which appeals to nostalgic audiences.

Hu Zhifeng, vice-president of the Beijing Film Academy, says the musical is not only a salute to the opera version of Jiang Jie, but also an experimental work of the academy.