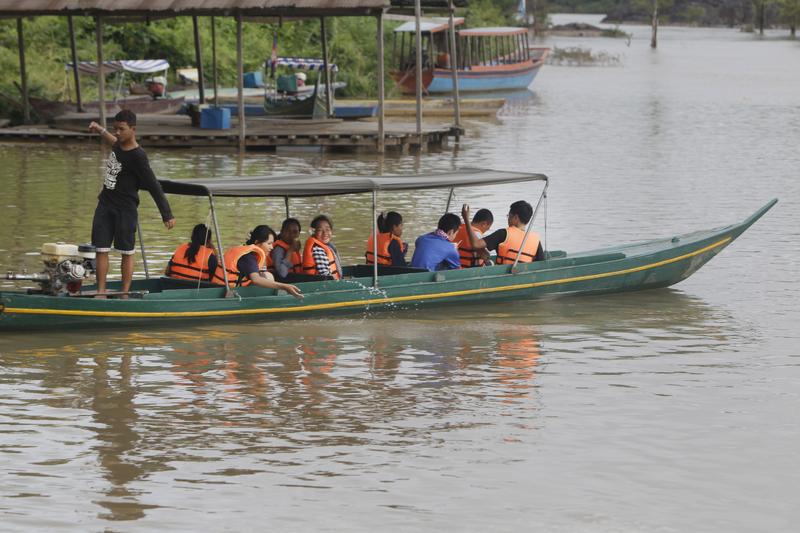 In this June 21, 2016, photo, tourists sit on a wooden boat as they start to cross the Mekong River to close a habitat of dolphin, which is located near the site of Don Sahong dam, near Cambodia-Laos borders, in Preah Romkel village, Stung Treng province, northeast of Phnom Penh, Cambodia. (HENG SINITH / AP)

The Chinese embassy in Cambodia said as of 12:00 local time on Friday, another person was successfully rescued, and a victim's body was recovered.

According to the Chinese embassy, they received a notification from the Cambodian Police Department on Thursday night, saying that the police found a sunken ship which used to have 41 Chinese citizens on board, with 18 having been rescued and the remaining 23 missing. Two Cambodian crew members involved have been arrested.
According to the rescued personnel, the people on board departed from Guangzhou, China on Sept 11 and were in distress shortly after arriving in the waters of Preah Sihanouk province.

The embassy said after receiving the information, Ambassador Wang Wentian immediately deployed staff to contact the Cambodian Ministry of National Defense, the police department, the Sihanouk Provincial Government and other relevant departments to request rescuing the missing ones. Li Jie, counselor and consul general of the embassy, rushed to Preah Sihanouk on Thursday night to coordinate relevant rescue operations.
Li on Friday morning got the information from Kuoch Chamroeun, governor of Preah Sihanouk province, about the latest progress in the search and rescue work. Chamroeun said that after the accident, the Cambodian Ministry of National Defense, the National Police and the provincial government carried out rescue work with all their strength.

The embassy said as of 12:00 local time on Friday, another person was successfully rescued, and a victim's body was recovered.
In order to mobilize social forces to participate in the rescue, the Sihanouk provincial government issued a reward notice to fishermen nearby, saying that rescuing each missing person would be rewarded with US$500.
The search and rescue operation is still going on.