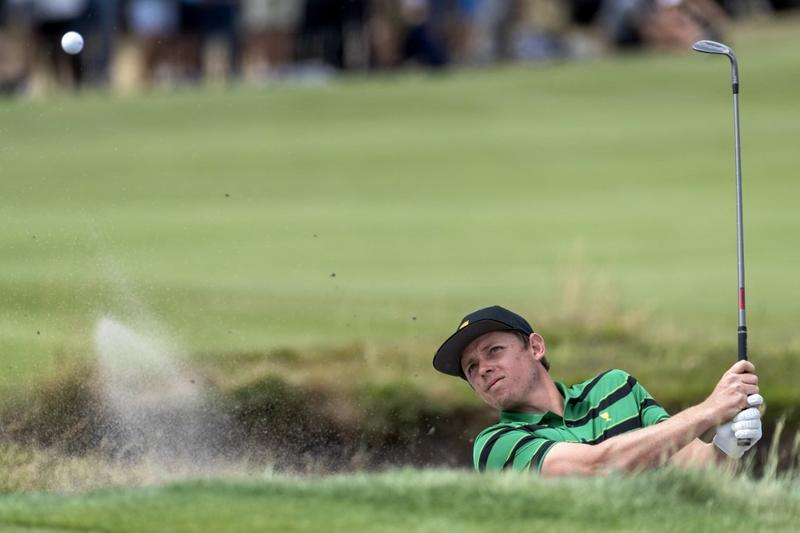 International Team player Cameron Smith of Australia plays out of the bunker to the 16th green on the last day of the Presidents Cup golf tournament in Melbourne on Dec 15, 2019. (SIMON BAKER / AFP)

CHARLOTTE, NC - The Presidents Cup got off to the blowout start many had predicted as the United States humbled a scrappy International team 4-1 in the opening foursomes on Thursday.

The Internationals, with a record eight Presidents Cup debutants in their 12-man team, started as massive underdogs against a US squad featuring nine of the top 15 in the world rankings

The US team had looked poised for a sweep of the five matches until the Internationals snatched an unexpected point when South Korea's Kim Si-woo and Australian Cam Davis taking down the all-star American pairing of world number one Scottie Scheffler and Sam Burns 2-Up.

The United States, who have dominated the biennial competition with an 11-1-1 record, came out with purpose having never lost on home soil.

Things had looked very grim for the Internationals after the hosts swept the opening three matches to power 3-0 ahead.

But salvaging a point ended a rough day on a positive note for captain Trevor Immelman's men, limiting the damage heading into Friday's fourballs although the challenge ahead remains a daunting one.

"We're going to keep fighting," assured Immelman. "It's what we do.

"Nobody here expects us to win. We've got to have that belief deep down.

"We're up against maybe the strongest American team ever assembled on paper.

"We've got our work cut out for us, but like I said, we'll keep going, man.

"We'll keep going until they ring the bell."

The Internationals, with a record eight Presidents Cup debutants in their 12-man team, started as massive underdogs against a US squad featuring nine of the top 15 in the world rankings.

With temperatures nudging towards 38 C the event got off to a steamy and raucous start with chants of "USA, USA" from the pro-American crowd echoing across the Quail Hollow Club.

US captain Davis Love III's squad did not waste any time giving the crowd reasons to cheer as they quickly seized control.

Immelman sent out his most experienced pair of Australian Adam Scott, playing in his 10th Presidents Cup, and Japan's Hideki Matsuyama first to face the US duo of world numbers four and five Patrick Cantlay and Xander Schauffele hoping the two veterans might set the tone for his young squad.

But the Internationals' two Masters champions failed to gel as Cantlay and Schauffele steamrolled to a 6&5 win, needing just 13 holes to clinch their team's first point.

When it comes to foursomes, 2021 FedEx champion Cantlay and Tokyo Olympic gold medallist Schauffele have been bankers for the US, improving to 5-0-0 in the alternate shot format after going unbeaten at the 2019 Presidents and 2021 Ryder Cups.

"We play so much golf together, we're so comfortable, we're good friends," said Schauffele. "It's just a lot of fun for us to do this.

"I told the guys last night we need to set the tone...and we did."

The remaining four matches offered more drama and entertainment but the pattern was the same.

Three-times major winner Jordan Spieth and Justin Thomas, who took the first of his two PGA Championship wins at Quail Hollow in 2017, never trailed South Korea's Im Sung-jae and Canadian Corey Connors on the way to a tidy 2&1 win.

Cameron Young, playing with Collin Morikawa, rolled in a long putt at the 17th to give the US another 2&1 victory over the South Korean partnership of Kim Joo-hyung and K.H. Lee.

Just when the US team appeared ready to end the first day of the biennial event perfectly, however, the Internationals dug in.

Leading 2-Up after 14 holes, Scheffler and Burns were poised to add to the US advantage but buckled as Kim and Davis won the last four holes.

"It was brutal start of first front nine, and back nine, try to keep it positive and keep it tight to, like, 17, 18," said Kim, one of a record four Koreans on the International team. "So I think that works.

"Then last five holes, we finally dropped some putt and it works."

The Internationals nearly trimmed the deficit further in the final match between Americans Tony Finau and Max Homa and Canadian Taylor Pendrith and Chile's Mito Pereira, which was tied heading to the 18th.

This time it was the International pair faltering, however, as Homa and Finau secured the point.