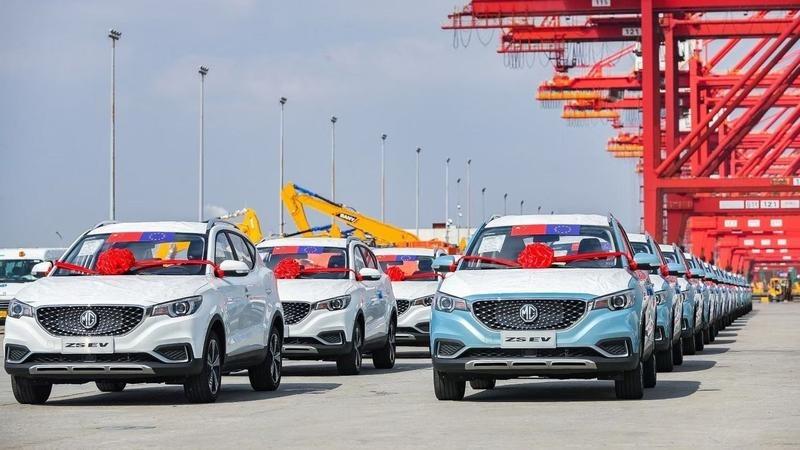 This undated photo shows SAIC Motor's MG-branded electric vehicles waiting to be loaded at a port in Shanghai. (PHOTO PROVIDED TO CHINADAILY.COM.CN)

Some 1.87 million passenger cars were sold via retail channels in August, up 28.9 percent year-on-year, the highest growth rate in the past decade, data from the China Passenger Car Association showed.

Some 1.87m passenger cars were sold via retail channels in August, up 28.9 percent year-on-year, the highest growth rate in the past decade, data from the China Passenger Car Association showed

Due to the continuous improvement of the logistics and supply chain, the car inventory is abundant, which has effectively stabilized the growth of the auto market, the association said.

In late May, China announced that it would halve the car purchase tax for passenger vehicles priced at no more than 300,000 yuan (about US$43,385) and with 2-liter engines or smaller. The tax cut will last from June 1 to the end of the year.

This favorable policy is gradually showing results, said the association, adding that some car companies stepped up efforts for sales promotion in August so as to make up for previous sales losses caused by the pandemic.

Sales of new energy vehicles (NEVs) in China also surged in August amid supply improvement and favorable policy, according to data from the association.

A total of 850,000 home-brand passenger cars were sold in the Chinese market last month, up 41 percent year-on-year, said the association.

They accounted for 45.8 percent of the total retail sales in August, up 3.8 percentage points from a year ago.

In the first eight months of the year, Chinese-brand car sales accounted for 46 percent of the total passenger car retail sales, up 6.9 percentage points from the year-earlier level.

The association noted that domestic auto brands registered robust growth in the new energy vehicle market, with the market share of leading firms such as BYD, Chery, Geely, and Changan recording a remarkable increase.