Summer slog worth the effort for rebuilding Team China 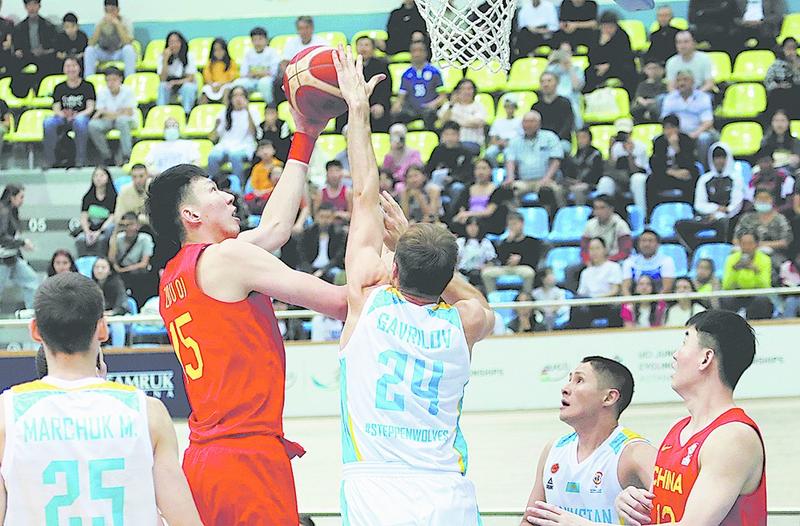 Team China center Zhou Qi, pictured in action against Kazakhstan, is unsure which franchise he will suit up with next. (XINHUA)

With its waning power in Asia exposed during a turbulent summer trip, the Chinese men's basketball team is desperate to level up its intensity and rebuild continental supremacy.

After three months of global travel for games and training programs, Team China has returned home exhausted but also fully aware of the tough new reality of the sport's fast-evolving international landscape.

The lack of intensity and physicality in the country's domestic league has slowed down the progress of China's best players, resulting in a decline in collective competitiveness, according to head coach Du Feng.

The lack of intensity and physicality in the country's domestic league has slowed down the progress of China's best players, resulting in a decline in collective competitiveness, according to head coach Du Feng

"Throughout the trip, we were shocked by how fast our international rivals have improved and how much we've been left behind," Du said in an online interview on Monday while serving out a mandatory quarantine with the team upon their return to China last week.

"With the game being played faster, sharper and stronger on the international stage, we have a lot of catching up to do in the development of individual skills, strength conditioning and transition play, beginning with the drills in the domestic league," added Du.

Assembled at the end of May after the CBA league completed its 2021-22 season, the national squad played four Asian qualifying games for next year's FIBA World Cup in Melbourne in July, then flew to Jakarta to compete in the 2022 Asia Cup, followed by a four-week stay in Europe, where Du's team scrimmaged with local clubs and touring NCAA teams in Spain and France.

After winning two more games in Astana against host Kazakhstan and Bahrain last month, Team China finished the summer ranked second behind powerhouse Australia to stand on the brink of securing a World Cup ticket with four qualifiers to go.

As a perennial power in Asia, Team China's second straight quarterfinal exit at the Asia Cup in Indonesia sparked a backlash back home, with the team's lackluster performances criticized by fans.

China's 69-72 quarterfinal loss to Lebanon, an opponent it had previously beaten 11 times, was considered a disgraceful result for a national program that has won the continental tournament 16 times. The team's sloppy play－underlined by China's 22 turnovers to Lebanon's eight－bore the brunt of the online rage.

"It's been a long while since we last played internationally at a serious tournament," said Team China point guard Sun Minghui at the Asia Cup. "The physicality, pace and intensity of international rivals surprised us so much that we were kind of overwhelmed by how good they've become."

The disappointing campaign, though, needs to be put in perspective, with key men such as playmaker Zhao Jiwei and prolific guard Guo Ailun not in prime condition after picking up COVID-19 infections on their way to Indonesia.

The team refused to use that as an excuse for another early exit at the tournament following a fifth-place finish at the previous edition in 2017.

"We probably had the most difficult conditioning and health issues we've ever had during what was the longest overseas trip we've been on," said Du. "Yet we embraced the bumpy ride as a learning curve and motivation for our players to work harder and develop faster in the domestic league for the next international window."

Should China sail smoothly through the remainder of the qualifying campaign with a top-three finish in the six-team group, it will make it to next year's World Cup, jointly hosted by the Philippines, Japan and Indonesia, where Asia's only direct berth for the 2024 Paris Olympics will be up for grabs.

"The goal for our rebuild project is to go to Paris after missing out on the Games for the first time since 1984 in Tokyo last year," said Du, a forward on China's record eighth-ranked squad at the home Olympics in 2008.

With only a month to go before the new CBA season tips off on Oct 10, the futures of two national team stars－former NBA center Zhou Qi and Guo－remain unclear.

With their contracts expired, Zhou and Guo are seeking to secure releases from the Xinjiang Flying Tigers and Liaoning Leopards respectively. However, as per league rules, they cannot move on because Xinjiang and Liaoning have offered them max extensions.

"If I have a chance, I will go to play in a higher-level league," said Zhou, a versatile 2.17-meter center who played with the Houston Rockets in the NBA from 2017-19 after being selected in the 2016 draft.

Zhou played with the South East Melbourne Phoenix in Australia's top flight last season after his breakup with Xinjiang in the summer of 2021, and credits the stint Down Under with improving his game.

"We trained less in Australia than back in China but at a higher level and with greater intensity, so I had to level up my game to the super-competitive standards there, and I have improved a lot especially in handling the physical side of things better," said Zhou, who averaged 17.6 points and 10.4 rebounds in seven games representing China to stand out as one of the World Cup qualifying event's most impressive stars.

With the domestic game not competitive enough for Zhou, the 26-year-old CBA All-Star is also looking at a return to the NBA, with speculation surfacing on Chinese social media that his agent has traveled to the US to explore potential deals with multiple franchises.

"Nothing concrete has been done yet. I don't know where I will go at the moment, but one thing for sure is that I am ready for the challenge at a higher level," he said.