Yuan ready for the grind as PGA challenge awaits

China's Yuan Yechun watches his drive from the 2nd tee in round 3 of the men’s golf individual stroke play during the Tokyo 2020 Olympic Games at the Kasumigaseki Country Club in Kawagoe on July 31, 2021. (KAZUHIRO NOGI / AFP)

China's Carl Yuan Yechun knows he has plenty of work ahead in his bid to firmly establish himself as a star on the PGA Tour after concluding the Korn Ferry Tour's regular season as No 1 on Sunday.

The 25-year-old Yuan will be joined on the world's elite circuit by compatriot Marty Dou Zecheng and fellow Asian golfers, An Byeong-hun and Kim Seong-hyeon of South Korea and Chinese Taipei's Kevin Yu, who all finished in the top 25 on the final Korn Ferry Tour points list.

Following one win and seven other top-10s, Yuan achieved his dream of securing his PGA Tour card for the first time and the Dalian native is now looking forward to his first stint against the globe's biggest stars.

It's going to be a new experience. New courses, new challenges … maybe pair up with some big names, learn from them. Everybody has contributed a lot, including my coach, wife, caddie, parents, friends. Everybody surrounding me, making me who I am.

"It's going to be a new experience," said Yuan. "New courses, new challenges … maybe pair up with some big names, learn from them. Everybody has contributed a lot, including my coach, wife, caddie, parents, friends. Everybody surrounding me, making me who I am. A big thank-you to all of them that make me where I am now."

He is under no illusion the road ahead will be challenging. Becoming the first Chinese mainland winner on the PGA Tour and breaking into the world's top 30 are some of his long-term goals, and he has given himself time to tick off those boxes.

"I hope I can have a PGA Tour title within five years, and be in the world's top 30 too," said Yuan, who represented China at the Tokyo Olympic Games last summer.

"Many objectives are waiting for me. The PGA Tour is a new platform, and I may need some time to adapt.

"The golf courses will be more difficult and I may find a caddie who is more familiar with tour courses. I think I have an advantage on the long game, but I need to improve my short game." 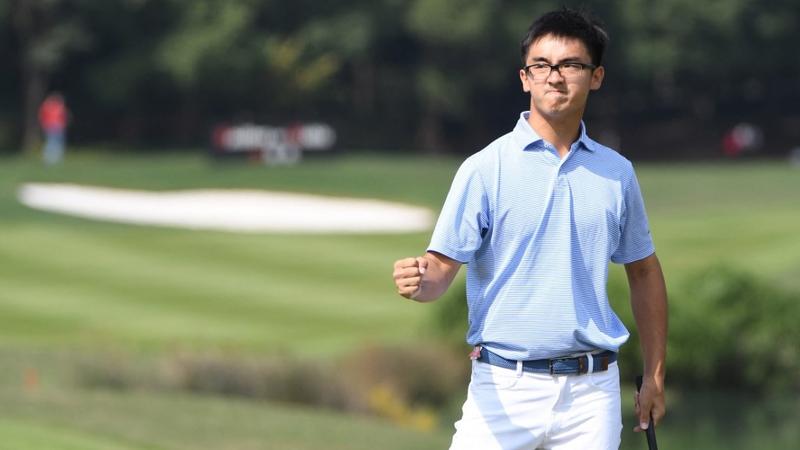 Marty Dou Zecheng of China celebrates a birdie putt during the first round at the WGC-HSBC Champions at the Sheshan International golf club in Shanghai on Oct 26, 2017. (GOH CHAI HIN / AFP)

After finishing fourth in the final rankings, Dou earned a second crack at the PGA Tour. His debut campaign in 2018 proved to be a steep learning curve as he returned to the Korn Ferry Tour the following year.

"It feels real now," Dou said. "The first year I got there, I kind of felt I wasn't ready. But it's been three years now from that time, and I do feel like all parts of my game are set for the big tour."

A tearful Kevin Yu of Chinese Taipei made it a record five Asian golfers to secure their tour cards following the conclusion of the Pinnacle Bank Championship. It was the perfect birthday gift for Yu, a former amateur star who turned 23 earlier in the week. Despite missing the halfway cut at The Club at Indian Creek in Nebraska, Yu safely finished in 20th position on the final standings.

Yu joins close friend CT Pan as the only other Chinese Taipei player in history to earn a PGA Tour card via the Korn Ferry Tour. He was a runner-up twice and also had a solo-third finish this season－his second year on the circuit.

Zhang survived a nervous finish on Sunday for a final-round 68 and a tied-16th position to qualify for the Korn Ferry Tour Finals－a three-tournament series starting later this week. The top 75 players from the KFT rankings are eligible for the Finals and will be joined by players who finished 126th to 200th from the PGA Tour's FedEx-Cup standings. The top 25 after three tournaments will also earn PGA Tour cards.