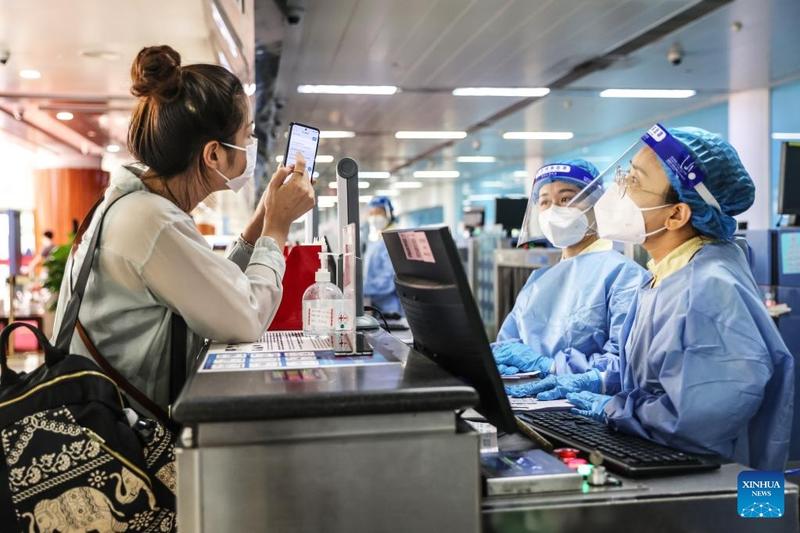 Hidden infections expected to be found in Tibet as testing increases

Flights from major airports in Hainan are returning to normal as the epidemic-stricken island and destination cities take effective measures to help stranded tourists return home as soon as possible, according to local authorities.

As of Sunday, more than 140 flights had been arranged in the six previous days, taking 27,211 tourists home from Haikou, the provincial capital, and Sanya, a resort city at the southern tip of the island and epicenter of the outbreak which was first reported on Aug 1, local officials told a news conference in Haikou on Monday.

The outbreak has stranded about 150,000 tourists on Hainan, but the island has closely coordinated with destination provinces, regions and municipalities to ensure the rapid, safe and orderly return of those stuck, officials said

About 40 flights were planned to take off from the Sanya Phoenix International Airport on Monday while another 90 flights are scheduled for Tuesday and Wednesday.

The outbreak has stranded about 150,000 tourists on the island, but Hainan has closely coordinated with destination provinces, regions and municipalities to ensure the rapid, safe and orderly return of those stuck, officials said.

Measures were also being implemented to ensure all requirements are met, as well as the strict closed-loop management of tourists currently in zero or low-risk areas, who have applied to depart by train or ferry.

The number of cases in the community is declining gradually, and the situation in Hainan remains at a high yet controllable level, Du Jianwei, an official with the provincial health commission, told the news briefing.

Sanya is in a period of high-level fluctuation, and new infections have mainly been found among people in closed-loop control, Du said.

He added that Hainan will further strengthen epidemic prevention and control in Danzhou, Lingshui, Dongfang, Lingao, Wanning and Ledong, regions where the epidemic is still developing and the risk of transmission in communities remains.

So far, 37 patients have recovered and been discharged from hospitals. Currently, there are 7,913 inpatients, including three in critical condition, five in severe condition, 83 in less severe condition, 2,268 with mild symptoms, 2,678 asymptomatic carriers and 2,876 unclassified patients, Du said.

Luo Dong, a vice-mayor of Sanya, said that the city has increased transport capacity and flights to ensure the orderly return of more tourists, and has adopted strict measures to prevent the epidemic from spreading elsewhere. He added that there have been no cases of spillover to other provinces and cities on the Chinese mainland since August. 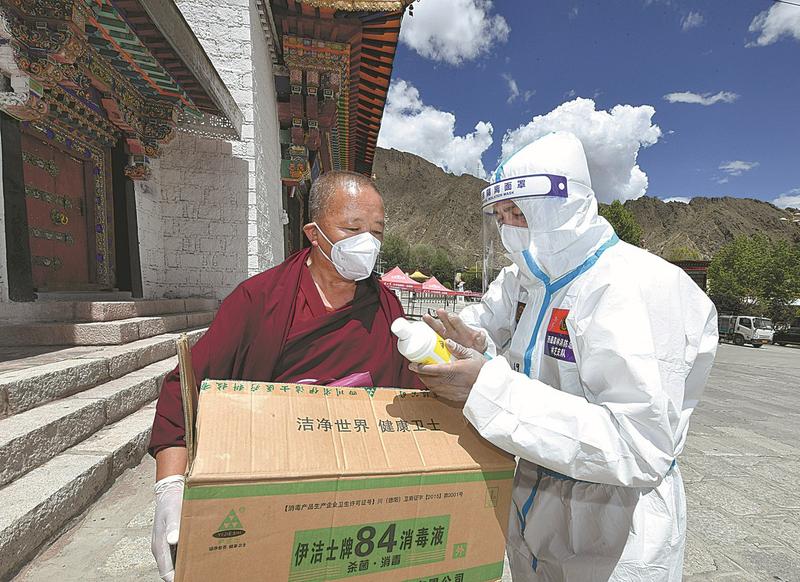 A medical worker instructs a monk on the usage of disinfectants at the Drepung Monastery in Lhasa, Tibet autonomous region, on August 14, 2022. (PHOTO / CHINA NEWS SERVICE)

Meanwhile, in Tibet, another region hit hard by the epidemic, the number of infections has continued to increase.

The Omicron variant BA.2.76 causing the outbreaks has a shorter incubation period, and is highly and rapidly transmissible, which enables hidden transmission, multi-chain transmission and cluster infections... With the continuous improvement of Tibet's nucleic acid testing capability, we expect that hidden infections will be discovered and controlled more rapidly.

an official from Tibet's health commission

As of 2 pm Monday, the region has reported 160 confirmed and 1,326 asymptomatic cases.

"The Omicron variant BA.2.76 causing the outbreaks has a shorter incubation period, and is highly and rapidly transmissible, which enables hidden transmission, multi-chain transmission and cluster infections," said Wang Shoubi, an official from the region's health commission. "With the continuous improvement of the region's nucleic acid testing capability, we expect that hidden infections will be discovered and controlled more rapidly."

The cases were reported in the districts of Changping, Chaoyang and Fengtai, according to Liu Xiaofeng, deputy director of the Beijing Center for Disease Prevention and Control, at a news conference on Monday afternoon.

The infections were detected among people returning to Beijing and they have been sent to hospitals for treatment.

Residents who have been to high-risk areas including Hainan province, the Tibet autonomous region and the Xinjiang Uygur autonomous region should report to their residential communities, hotels or workplaces for epidemic prevention, Liu said.

"Epidemic prevention and control measures must not slacken as Beijing is facing a peak in returning travelers," he said.

Of the new cases, an asymptomatic carrier surnamed Liu has been investigated by Fengtai district police for allegedly concealing his travel history before returning to Beijing.

Liu was suspected of concealing the fact he had visited medium and high-risk areas, which led to 260 people designated as being at risk of infection.

Qiu Quanlin contributed to this story.