S. Korea older workers back in factories amid labor crunch 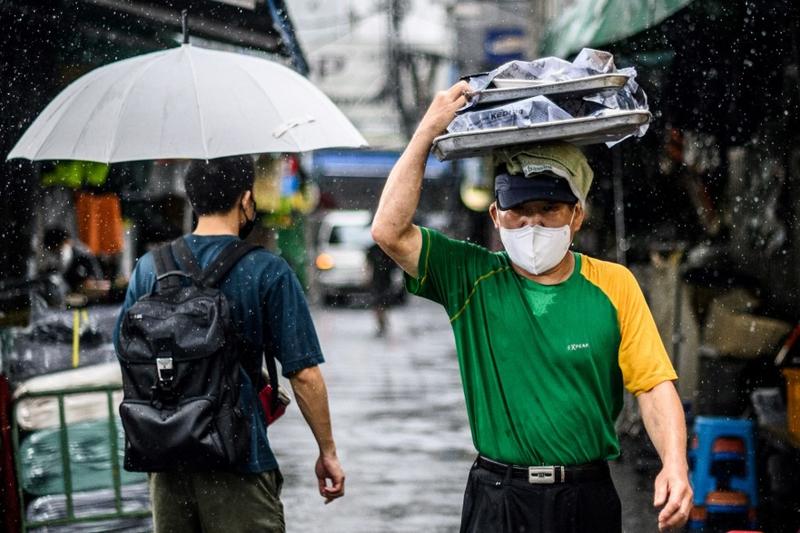 A restaurant worker (right) carries trays of food on his head as he walks past a pedestrian with an umbrella in Seoul on June 30, 2022. (ANTHONY WALLACE / AFP)

SEOUL - When Hwang Kwang-jo's factory in Seoul faced a staffing crunch earlier this year after the departure of Nepalese workers and younger locals, he hired a 61-year-old to pick up some of the work.

While the job, which involves handling heavy alloy bars, is less than ideal for workers close to retirement, the pandemic has diminished South Korea's pool of foreign labor, forcing firms to widen the net.

Compounding that challenge is younger Koreans' reluctance to take up blue-collar jobs.

"It's incredibly difficult to fill vacancies, I never received any resumes from those in their 20s," said Hwang, chief executive at Iljin Enterprise, an aluminum molding plant that usually employs about 35 people. "We were able to find Mr Oh in April after the two Nepalese had to leave the country due to visa issues."

The scramble for labor in South Korea, where unemployment hit a near-record low of 2.9 percent in July, has led to a surge in the number of elderly people in the workforce with 58 percent of the job increases driven by people aged 60 and older.

The scramble for labor in South Korea, where unemployment hit a near-record low of 2.9 percent in July, has led to a surge in the number of elderly people in the workforce with 58 percent of the job increases driven by people aged 60 and older

But even that hasn't been enough to ease staff shortages across the industrial and farming sectors in Asia's fourth-largest economy, setting up new price pressures with inflation already running at a 24-year high.

In South Korea, the world's fastest aging society, 33.1 percent of people aged between 70-74 are still working, topping the OECD's scale measuring the employment for the age group and far higher than the OECD average of 15.2 percent.

Central bank data shows over 230,000 of those aged 60 or over have found jobs at factories and construction sites since early 2020, while younger people have been leaving those sectors.

While South Korea's foreign worker contingent, at 848,000, is relatively small compared with other industrialized economies, migrants make an important contribution to the factory sector.

Since early 2020, the monthly inflow of new foreign workers is about 35 percent of what the country had in 2019, before the pandemic, government data showed.

Japan is experiencing a similar problem, with strict pandemic controls keeping migrant labor out, prompting an even greater reliance on the elderly population to fill vacancies.

Hwang at Iljin Enterprise says while the physical demands of work at his factory make it better suited for younger foreign and local workers, he doesn't have much choice.

"If I can't get any younger folks or foreign workers, it would be my bottom choice but I might need to hire more older folks," said Hwang, who recently gave all his crew a raise on top of the 700,000 won monthly bonuses he gave his foreign staff.

For Kim Ji-hwang, a land developer in Danyang, two-and-a-half hours south of Seoul, a staff shortage prompted him to hire 64-year-old Park Jang-young.

Park's new job requires him to clean trucks and equipment at the development site and earns him about 3.7 million won (US$2,844.18) a month, significantly more than his previous job at a parking lot.

"I know my boss prefers to find younger folks but young people go to Seoul after graduation - even foreign workers are picky, they have a good network and community to share information about pay, working conditions," Park said. "I will stick to this job unless I get fired - it's good pay I think for my age."