Australia to build own mRNA vaccine plant with Moderna

This file photo taken on June 4, 2021 shows a vial of the Moderna COVID-19 vaccine at a pharmacy in Paris, France. (STEPHANE DE SAKUTIN / AFP)

Pharmaceutical giant Moderna signed a 10-year agreement with Australia's federal government and the Victorian government to work with Monash University, one of the nation's leading biomedical research institutions, to create the facility, which is expected to produce up to 100 million vaccine doses annually.

Moderna said it would give Australians ready access to the company's COVID-19 vaccine, Spikevax, and provide mRNA manufacturing capabilities in the case of a new pandemic, such as avian influenza or another novel pathogen.

In announcing the deal on Monday, Australian Prime Minister Anthony Albanese said the pandemic had "shown us how important local manufacturing capability is to our security and to our health."

Victorian Premier Daniel Andrews was also supportive of the project, predicting "it will save lives, create jobs and strengthen Victoria's position as a national leader in medical manufacturing."

Monash University Vice-Chancellor Professor Margaret Gardner said the facility, due to open in 2024, would complement the university's own ribonucleic acid (RNA) ecosystem with "ground-breaking work that will lead to the rapid development of life-saving vaccines and therapeutic treatments for infectious diseases and cancers."

The Moderna facility will be part of the Monash Technology Precinct, which already contributes about 9.4 billion Australian dollars ($6.61 billion) annually to the Victorian economy with a combined workforce of about 95,000 people spreading among 13,000 high-tech businesses, according to the university.

Brunei logged a daily average of 420 new COVID-19 cases in the past week, the country's Health Ministry said on Monday.

According to the ministry's weekly briefing, 62,348 antigen rapid test (ART) results were uploaded to the government platform within one week, with 4.7 percent of them being positive.

Currently, no hospitalized cases are held in intensive care unit, but two cases require assisted breathing, according to the ministry.

As of Aug 14, 76.1 percent of Brunei's population have received three doses of COVID-19 vaccines, while 8.5 percent have taken the fourth dose. 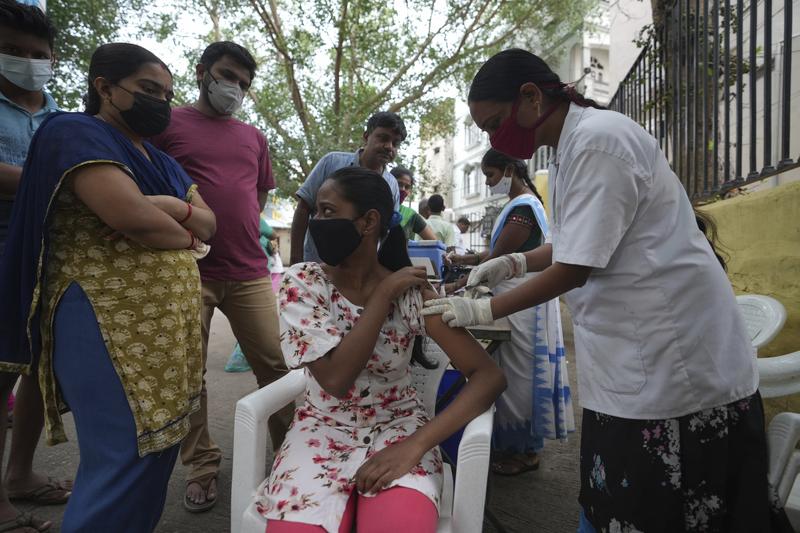 A health worker administers Covishield vaccine for COVID-19 at a vaccination center in Hyderabad, India on July 15, 2022. (MAHESH KUMAR A. / AP PHOTO)

According to federal health ministry data released on Tuesday morning, 8,813 new cases of COVID-19 were reported during the past 24 hours, taking the total tally to 44,277,194 in the country.

The cases reported on Tuesday mark a sharp decline in comparison to the daily caseload of 14,917 reported on Monday.

With the reporting of fresh cases, India's active caseload currently stands at 111,252.

The country also logged 29 related deaths during the past 24 hours, pushing the overall death toll to 527,098 since the beginning of the pandemic, the ministry said.

According to the federal health ministry, the cumulative COVID-19 vaccination coverage in the country has exceeded 2 billion doses and until Tuesday morning 2,083,124,694 doses were administered.

A cumulative total of 880,692,503 samples have been tested up to August 15, the health ministry said Tuesday. Out of these 212,129 tests were conducted on Monday alone.

Separately, head of Serum Institute of India Adar Poonawalla told a local news channel on Monday that the institute was working on an Omicron-specific vaccine with Novavax. According to Poonawalla, the vaccine will be specific to the BA.5 sub-variant of Omicron and can be expected within six months.

Amid an increase of daily new cases, the local governments in New Delhi and neighboring state of Punjab have made wearing face masks in public places mandatory and asked officials to enforce the order by imposing fines on violators.

Malaysia reported 2,437 new COVID-19 infections as of midnight Monday, bringing the national total to 4,737,984, according to the health ministry.

There are six new imported cases, with 2,431 cases being local transmissions, data released on the ministry's website showed.

Another eight deaths have been reported, pushing the death toll to 36,093.

Myanmar confirmed 18 new cases of COVID-19 in the past 24 hours, bringing the national tally to 614,407 on Monday, according to the Ministry of Health.

It said that the death toll from COVID-19 in the country remained unchanged at 19,435 as no new deaths were confirmed in the past 24 hours.

New Zealand recorded 4,811 new community cases of COVID-19 and 21 more deaths from the pandemic, the country's Ministry of Health said on Tuesday.

New Zealand has reported 1,681,473 confirmed cases of COVID-19 and 1,782 confirmed deaths attributable to the disease since the pandemic hit the country in early 2020, the health ministry said.

Currently, 533 COVID-19 patients are being treated in hospitals in the country, including 12 in intensive care units or high dependency units, showed official data. 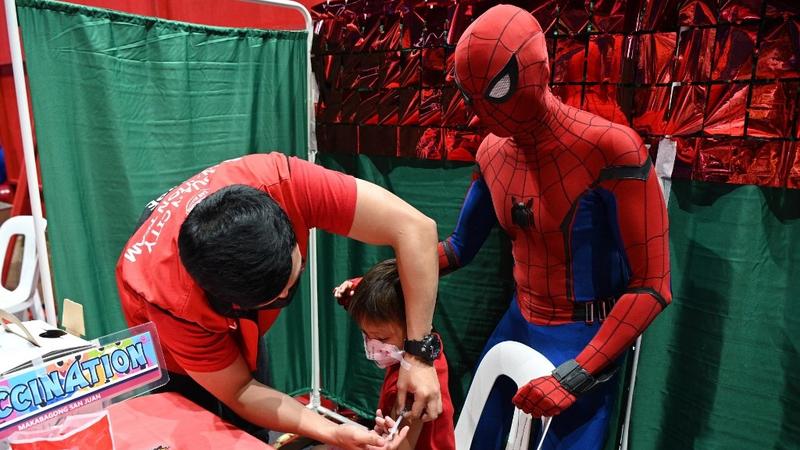 A child receives the Pfizer-BioNtech COVID-19 vaccine for children aged 5-11 as a performer dressed as superhero character Spider-Man looks on at a gym in San Juan City, suburban Manila on Feb 7, 2022. (TED ALJIBE / AFP)

The Philippines reported 3,484 new COVID-19 infections on Monday, bringing the number of confirmed cases in the Southeast Asian country to 3,835,422.

The Department of Health said the number of active cases fell to 38,982, and 42 more patients died from COVID-19 complications, pushing the country's death toll to 61,078.

The Philippines reported its highest COVID-19 single-day tally of 39,004 new cases on Jan 15. The country, with a population of around 110 million, has fully vaccinated over 71.5 million people. 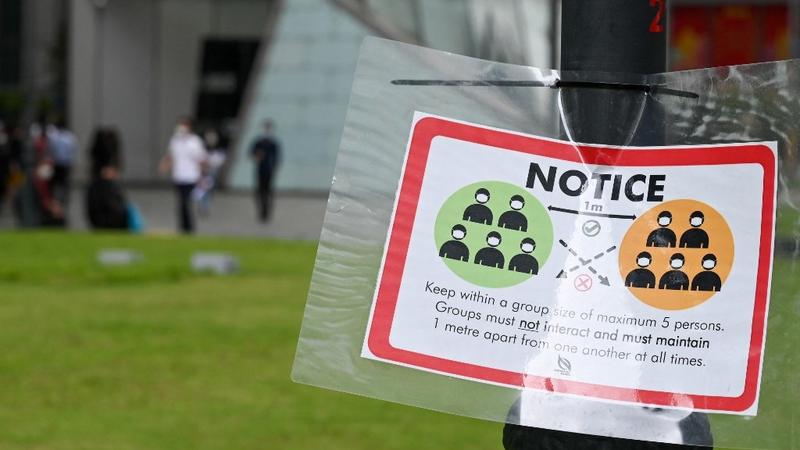 A notice warning people not to gather in groups larger than five persons as part of restrictions to hald the spread of the coronavirus is displayed at Raffles Place financial business district in Singapore on Jan 4, 2022. (ROSLAN RAHMAN / AFP)

Of the new cases, 271 cases were detected through PCR (polymerase chain reaction) tests and 2,394 through antigen rapid tests (ART), according to statistics released by the Ministry of Health.

One death was reported from COVID-19 on Monday, bringing the total death toll to 1,560, the ministry said.

South Korea reported 84,128 new COVID-19 cases as of midnight Monday compared to 24 hours ago, raising the total number of infections to 21,502,164, the health authorities said Tuesday.

The daily caseload was up from 62,078 in the previous day, but it was far lower than 149,866 tallied a week earlier, according to the Korea Disease Control and Prevention Agency (KDCA).

For the past week, the daily average number of confirmed cases was 115,438.

Thirty-seven more deaths were confirmed, leaving the death toll at 25,710. The total fatality rate was 0.12 percent. 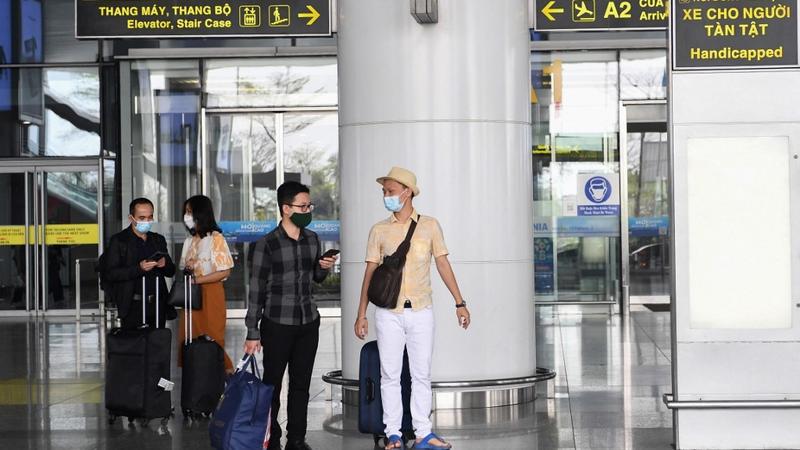 Passengers wait for transportation outside the arrival hall of Noi Bai International Airport in Hanoi on March 15, 2022, as Vietnam announced the return of a visa exemption policy for 13 countries in an effort to kickstart its tourism sector. (NHAC NGUYEN / AFP)

Vietnam recorded 1,695 new COVID-19 cases on Monday, up by 266 from Sunday, according to its Ministry of Health.

All the new cases were locally transmitted, said the health ministry.

The newly reported infections brought the total tally to 11,367,479. The country reported no new deaths from the pandemic on Monday, with the total fatalities staying at 43,098.

As of Monday, there were 124 severe cases in need of assisted breathing in the Southeast Asian country, according to the ministry.

Nearly 251.5 million doses of COVID-19 vaccines have been administered in the country, including over 216.3 million shots on people aged 18 and above, said the ministry.