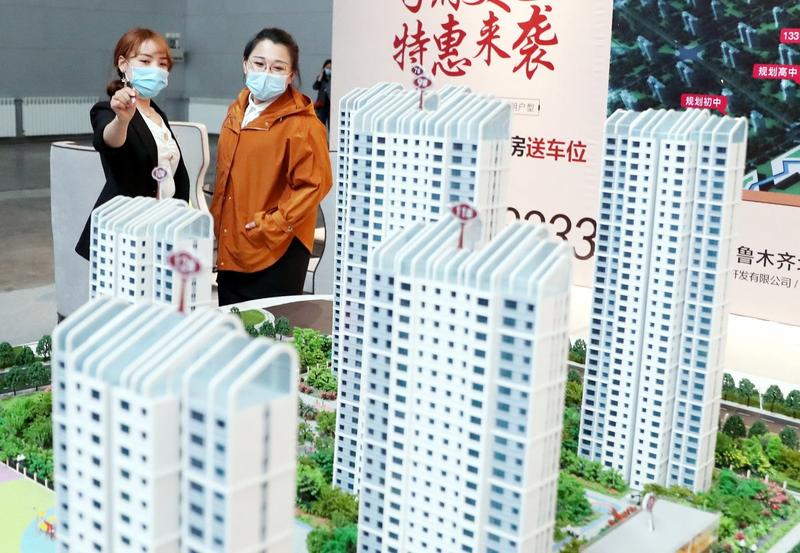 A saleswoman (left) shows a model of a newly developed residential area to a potential homebuyer in Urumqi, the capital city of Xinjiang Uygur autonomous region. (ZHANG XIUKE / FOR CHINA DAILY)

After having shown signs of stabilization, the real estate sector was impacted by COVID-19 once again in the first half. In the meantime, the sector is being challenged by a debt crisis. In my view, the Chinese property market is currently at a turning point in which market operation fundamentals have changed, and economic growth is unlikely to be driven substantially by real estate. Instead, we should work on avoiding the spread of risk from the sector.

First of all, I would like to point out that the fundamentals on which China's property market operations are based are different now.

Previously, when the Chinese economy was hard hit during the 2003 SARS outbreak and the 2008 financial crisis, real estate played a role as an economic stabilizer, which not only helped improve people's lives, but also sped up the nation's urbanization and economic development. The strategy was backed by the fact that per capita living space was comparatively small during those crises.

Along with the nation's economic transformation into a new development stage, the fundamentals of real estate market operations have changed as well. Although we have to admit that property remains one of the country's pillar industries, it is unlikely that the sector will significantly drive economic growth in the future, especially within the context of balanced development prospects. To be more specific, per capita living space in China is approaching two-thirds that of the United States, despite the fact that our per capita GDP is merely one-sixth that of the US. These figures indicate that our property industry has entered into a new development phase.

It is also worth noting that COVID-19 has had a serious impact on the Chinese economy. In the first quarter of 2020, China posted a rare negative GDP growth of 6.8 percent. Even during that period of time, our nation did not ease property regulations to drive economic growth.

By saying that fundamentals of the property market have changed, I am referring to two important policies－the three red lines and the concentration of the real estate loan management system.

The People's Bank of China－the country's central bank－along with the Ministry of Housing and Urban-Rural Development, jointly imposed the three red lines guidance in August 2020. It handles property developers' high leverage issues, and the new policy called for property developers' debt-to-asset ratios to be contained within certain ranges, and developers cannot apply for loans once their debt-to-asset ratios surpass designated levels.

If developers fail to meet one, two or all three of these red lines, regulators then place limits on the extent to which they can expand debt.

The centralization management system for real estate loans that was published on Dec 31, 2020 is conceived from the perspective of lenders. The system restricts property sector credit over the long term, and caps social resources that the real estate sector can occupy, thus ensuring that more resources can flow to advanced manufacturing and modern services.

I believe both of the policies were launched after careful deliberation, and should not be abolished due to the current difficulties the property industry faces, though these measures may be carried out at a slower pace.

Compared with the substantial housing market rebound in June 2020 when the contagion at the time came under better control, we do not expect a similar investment rebound this year.

Instead, more focus should be placed on economic recovery and development. I believe that the economy should gradually shift from an investment-driven mode to a consumption-driven mode, though investment will continue to play a supporting role in economic growth over the short term.

Property sector risks have yet to fully fade away. For the moment, China is under pressure from a debt crisis and COVID-19 risks in the property industry.

We have noticed that as of July 17, homebuyers of some 304 property projects in 25 provinces, municipalities and autonomous regions have refused to make mortgage payments due to delayed deliveries or stalled construction of their presold homes.

Every effort is being made to address property market risks from spreading to the financial sector or other areas. An unnamed official from China's top banking and insurance regulator said on July 14 that the key to the issue is to ensure deliveries of presold homes, and the China Banking and Insurance Regulatory Commission will coordinate with the housing regulator and the central bank in related financial services, so as to promote the real estate industry's healthy development and form a virtuous cycle.

Therefore I believe current risks will eventually be eased and existing property regulations can continue to soften.

In my view, China's housing regulations are created for three purposes－to prevent risks, to satisfy rigid and rational homebuying demand, and to maintain the stable development of the property market.

First, I agree that policy easing for homebuyers is realistic. Local governments should strike a balance between their respective measures and central government's guidelines so that we can both cushion the impact of COVID-19 and consolidate our achievements in macro regulating.

The latest loan prime rate adjustment in May brought down the over-five-year LPR－on which many lenders base their mortgage rates－by 15 basis points to 4.45 percent. This will cut costs of home purchases amid the recent housing market difficulties.

Second, amid ongoing property developers' risks, I suggest carrying out the three red lines and concentration of loan management at a slower pace.

Further, I also suggest supporting the acquisition of property projects. According to statistics, about 20 percent of the nation's property projects were developed by more than one developer in 2021, which means any risk emerging for any developer or project may involve all related parties. Therefore, if high-quality enterprises acquire projects without occurrences of risk, or enterprises with business operations being challenged, risks can be contained, and the industry and social stability will be ensured.

Last but not least, I also believe the presale fund should be placed under scientific and reasonable supervision. The Political Bureau of the Communist Party of China Central Committee meeting on April 29 noted that presale fund supervision can be optimized so that risks can be better managed.

The writer is a professor of economics and finance at the China Europe International Business School, and the former director of the People's Bank of China's statistics and analysis department.