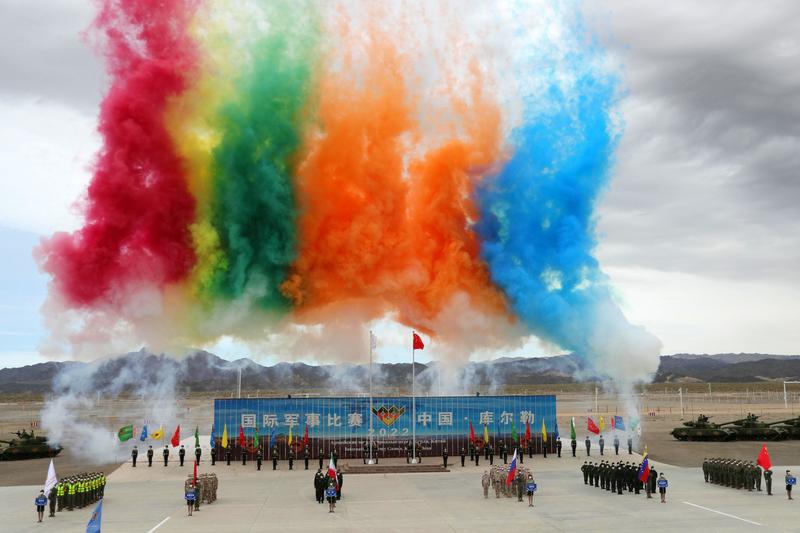 The Ministry of National Defense said that nine teams from China, Russia, Belarus, Iran and Venezuela will participate in the "Suvorov Onslaught", a contest among infantry vehicle crews, and the "Safe Route", a minesweeping contest among military engineering troops. The contests started on Saturday in Korla, Xinjiang.

We will provide good competing conditions for the contestants and make the events a platform for soldiers to learn from each other.

Wang Haidong, a PLA organizer of the Korla section of the International Army Games

The competitions will last two weeks and a closing ceremony is scheduled to be held on Aug 26.

The International Army Games, initiated by the Russian Defense Ministry in 2013, has served as an international platform for militaries to exchange experience and strengthen cooperation, the Russian ministry said ahead of this year's events.

The International Army Games 2022 will be held from Saturday to Aug 27 in 12 countries. Nearly 280 teams from 37 countries will take part in a total of 36 competitions, the Russian ministry said in a statement.

Organizers from the PLA said that compared with previous contests in Korla, this year's arrangements will be closer to real combat and be more challenging.

Cultural performance activities and an equipment exhibition will also be held on the sidelines of the competition.

Senior Colonel Wang Haidong, a PLA organizer of the Korla events, told China Central Television on Saturday that contestants from the five militaries have carried out comprehensive training since they arrived while the organizers have made specific logistics support plans.

"We will provide good competing conditions for the contestants and make the events a platform for soldiers to learn from each other," he said.

In addition to Korla, the PLA will host and participate in the "Sea Cup" contest, a competition among naval surface ships, in Qingdao, a port city in East China's Shandong province, from Monday to Aug 21.

The Chinese and Russian navies will take part in the contest that involves firing guns, air defense maneuvers, search and rescue as well as anti-terrorism and anti-piracy deployments.