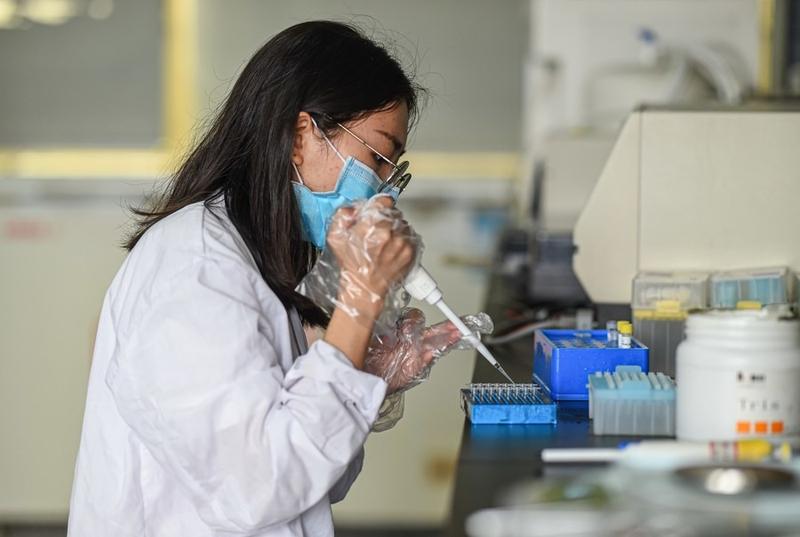 For the first time, China has overtaken the United States as the world's leader in both the quantity and quality of scientific papers published from 2018 to 2020, according to an annual report published by an institution affiliated with Japan's science and technology ministry.

Experts said the result was expected given China's massive talent pool, growing research budget, and sustained social and political support for research undertakings. However, China-US sci-tech competition will likely intensify after the US approved the Chips and Science Act to boost its scientific competitiveness against China, they added.

The report was published by Japan's National Institute of Science and Technology Policy on Tuesday. The statistics were based on yearly averages between 2018 and 2020, and were compiled by analytics company Clarivate.

Chinese research accounted for 27.2 percent, or 4,744 papers, of the world's top 1 percent of highly cited papers from 2018 to 2020. The US accounted for 24.9 percent, or 4,330 papers, followed by the United Kingdom with 5.5 percent and 963 papers. It was the first time that China surpassed the US in this prestigious category, the report noted.

ALSO READ: Jiangsu makes itself a model of innovation

"China is one of the top countries in the world in terms of both the quantity and quality of scientific papers," Shinichi Kuroki, a researcher with the Japan Science and Technology Agency, told Nikkei Asia. "In order to become the true global leader, it will need to continue producing internationally recognized research," he added.

As for quality papers that outperformed 90 percent of their competitors, China contributed 46,352 of such studies, accounting for 26.6 percent of the world's total. The US followed with 36,680 papers at 21.1 percent. It was the second consecutive year that China topped this category.

Materials science, chemistry, engineering and mathematics were China's most prolific science fields, while US researchers were more active in clinical medicines, basic life sciences and physics, the report noted.

The report was published on the day US President Joe Biden signed the Chips and Science Act, which would authorize over $225 billion in research funding over the next decade to make the US more competitive against China in science and technology.

An expert on China's science and technology development, who requested anonymity, said China's progress in the quality and quantity of its scientific output has been well documented over the years.

"These scientific achievements have played a major role in supporting China's socioeconomic development and bolstering the Chinese scientific community's prestige in frontier sciences and global sci-tech governance," the expert said.

Last year, China led the world in four scientific fields in terms of the total number of citations generated by its scientific literature published from 2011 to 2021, according to an annual report published by the Institute of Scientific and Technical Information of China in December.

These included China's traditionally strong disciplines, such as materials science, chemistry, and engineering technology, with one notable addition being computer science. China also held second place in 10 other fields in this metric, including agricultural science, biology and biochemistry, and environmental and ecological sciences.

When commenting on China-US sci-tech relations, the Chinese expert said it is a shame that two of the world's most productive scientific communities are struggling to maintain their long and fruitful history of cooperation, mostly due to US politicians' attempts to decouple with China and suppress China's sci-tech progress.

"Pressure from the US government will only motivate the Chinese scientific community to make more original breakthroughs and achieve self-sufficiency in science and technology," he added.