Jiangsu makes itself a model of innovation 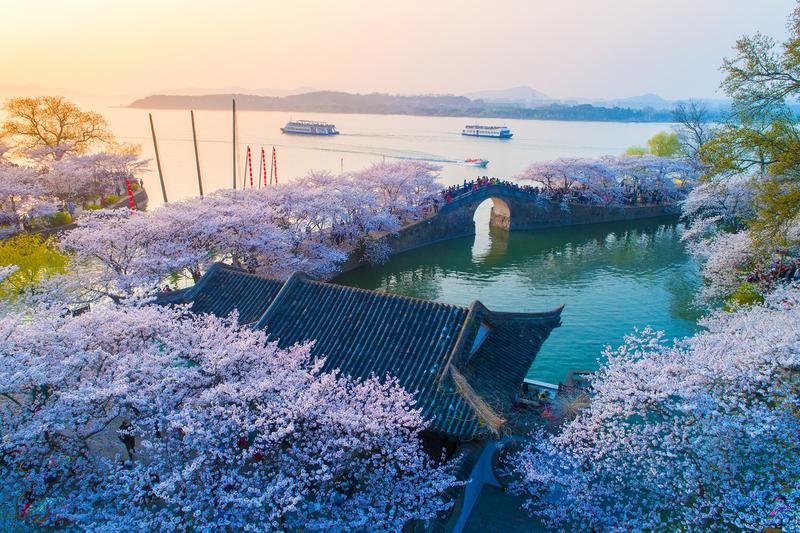 An aerial view of the Changchun Bridge amid cherry blossoms in spring in Wuxi, Jiangsu province. (CAO JUN / FOR CHINA DAILY)

Jiangsu province has become one of China's beacons of innovation after investing heavily in its science and technology industry and supporting researchers for many years.

According to the Jiangsu Department of Science and Technology, the province invested more than 340 billion yuan ($50 billion) in 2021, about 2.6 times as much as in 2012, which accounted for 2.95 percent of its GDP. 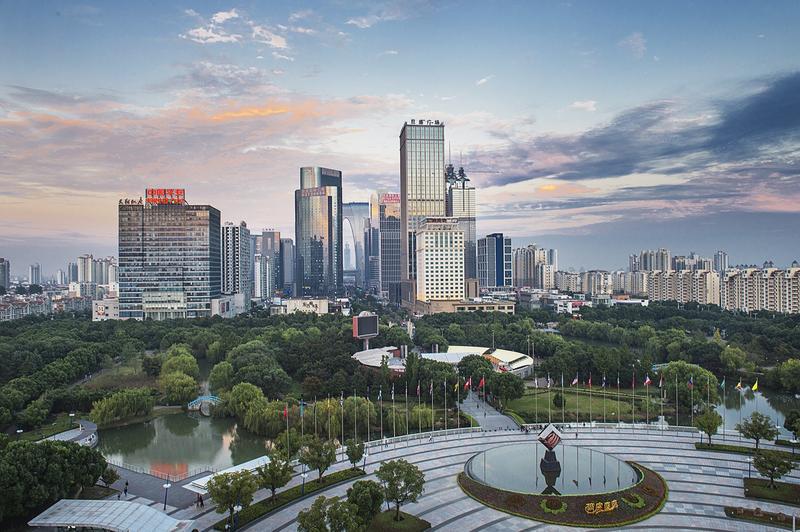 Wang Qin, director of the department, said that 15.1 percent of China's leading technologies are located in Jiangsu, and one-fifth of its high-tech exports are made in the province. 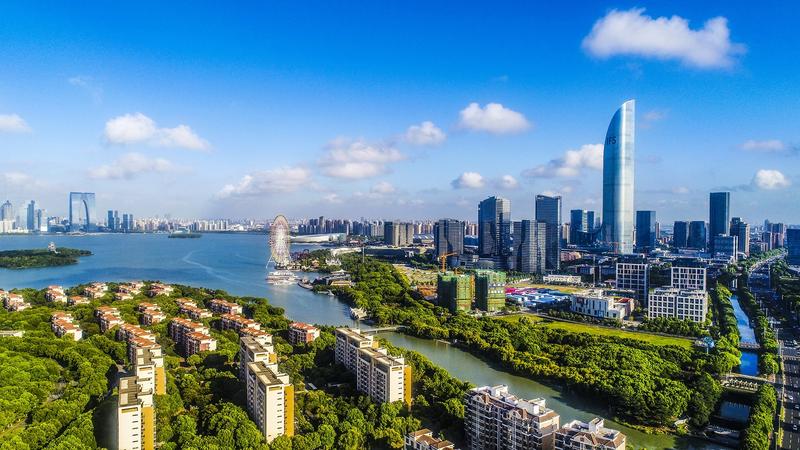 A view of the lake in the industrial park. (PHOTO PROVIDED TO CHINA DAILY)

In all, about 65 percent of academicians and 40 percent of candidates elected to major national talent programs have had companies, or have cooperated with programs in Jiangsu.

More than 10 percent of national-level talent has chosen to live and work in the province, which has ranked first nationally in terms of the number of people elected by major national entrepreneurship talent projects for 13 consecutive years.

Jiangsu's strong economy has enabled it to invest heavily in science and technology. 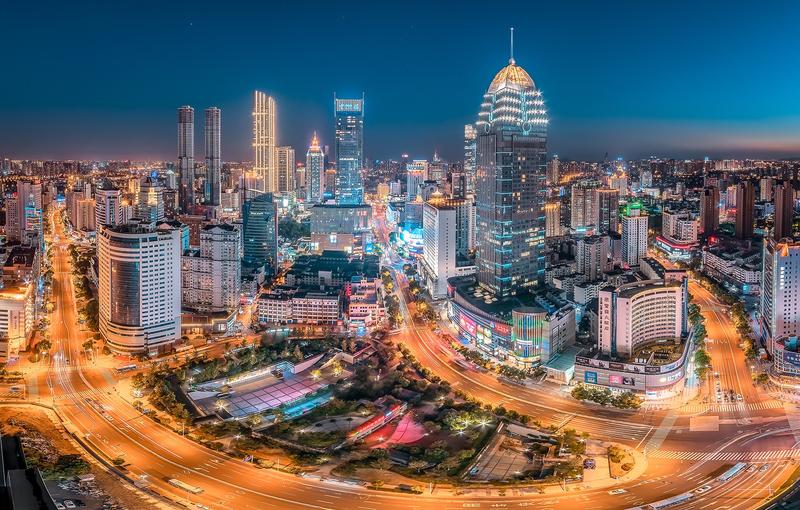 Night view of the Liangxi district in Wuxi. (PHOTO PROVIDED TO CHINA DAILY)

Last year, GDP hit a record high of 11.64 trillion yuan, accounting for 10.2 percent of the national economy, according to the Jiangsu Bureau of Statistics. From 2013 to 2021, GDP rose by an average of 7.4 percent every year, nearly 1 percentage point higher than the national average. 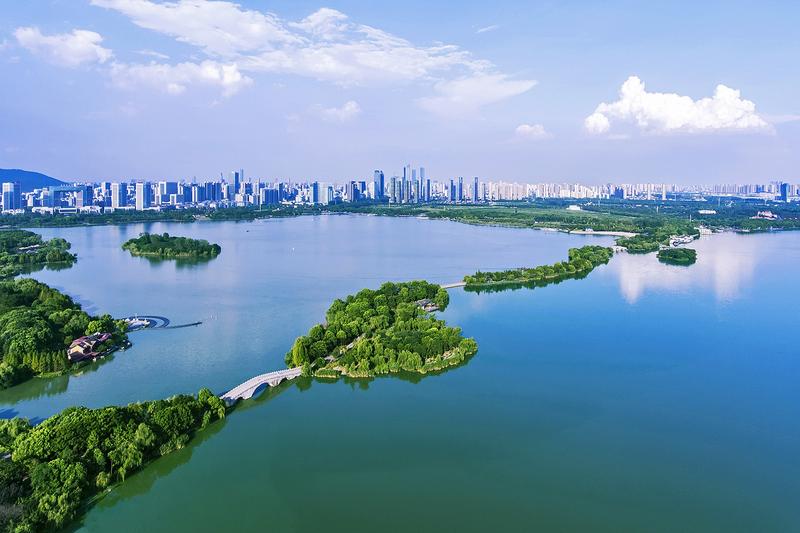 Chi Yu, deputy director of the Jiangsu Department of Industry and Information, said that the manufacturing industry remains the main force supporting socioeconomic development in the province, as well as its scientific development and opening-up.

Jiangsu had more than 15,000 companies in strategic emerging industries by the end of last year. Of those companies, the total earnings of 600 exceeded 1 billion yuan.

Jiangsu also has 70 listed companies on the Science and Technology Innovation Board, the most of any provincial region.

"The province will set up 200 provincial-level technology centers for companies every year," Chi said. "We will also support their drive to become national-level technological innovation enterprises." 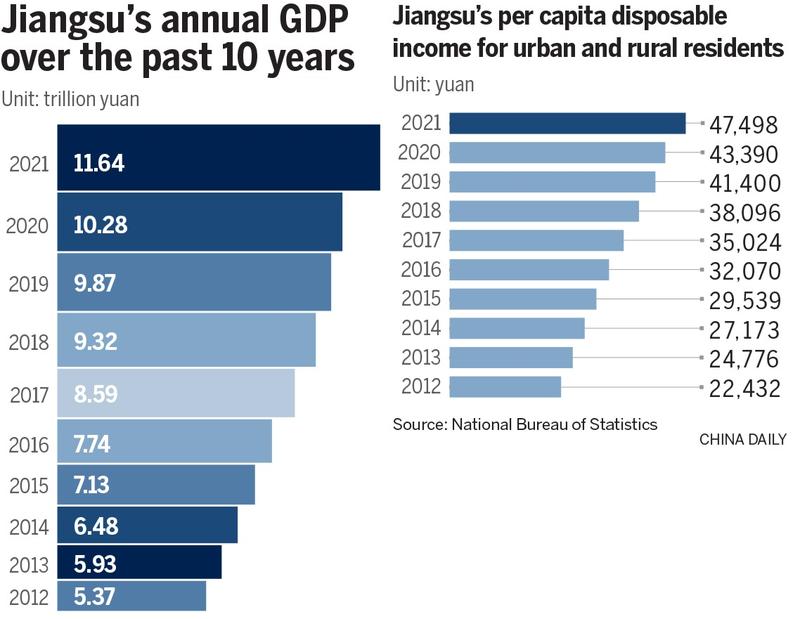 Last year, Jiangsu had more than 37,000 high-tech companies, seven times more than in 2012, according to the provincial Industry and Information Department.

Since 2012, the actual annual use of foreign capital in its manufacturing industry has exceeded $13 billion. As of June, 392 of the world's top 500 companies have invested in the province, and foreign-funded companies have become an important part of Jiangsu's modern industrial system.

Hong Hao, deputy director of the Jiangsu Organization Department, said that talent is crucial to the province developing its science and technology, and it will work to improve the environment for innovation.

Currently, cities such as Nanjing, Suzhou and Wuxi are making remarkable strides toward establishing a variety of specialized national high-level platforms to attract talent.

Hong also reiterated that preferential policies on housing, medical care and children's education will be provided to create a more attractive environment.

Guo Jun contributed to this story.