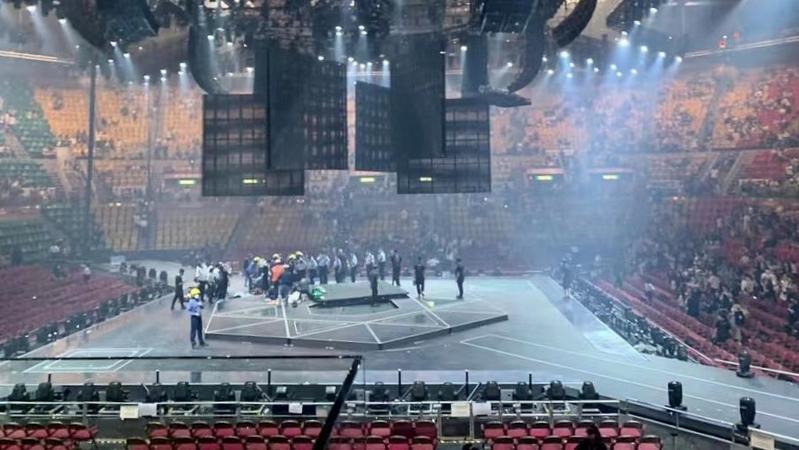 Paramedics attended to a performer injured when a huge video panel fell on the stage during a concert by popular Hong Kong boyband Mirror on July 28, 2022. (PHOTO PROVIDED TO CHINA DAILY)

HONG KONG - A task force led by the government looking into a recent concert accident has found that metal fatigue had caused the snapping of wire rope.

The task force, led by the Leisure and Cultural Services Department, was set up after a huge video panel fell on the stage during a concert by popular Hong Kong boy band Mirror on July 29, injuring two dancers.

In a statement issued on Friday, the task force said it has arranged earlier a cherry picker for experts to inspect the installations suspended at the top of the stage at the Hong Kong Coliseum.

“Besides, as the stage was dismantled, the task force had arranged the inspection and examination of all the hoisted installations which had been lowered down,” it said.

It said that in a meeting on Friday, the experts of the task force found that the snapping of wire rope was caused by metal fatigue, citing laboratory examination result.

However, further investigations are needed to find out the causes of metal fatigue, it added.

“In addition, the hanging system of panels and its workmanship may also be the causes for the falling down of the LED panels leading to the serious incident at the HKC,” it noted.

The task force will conduct further investigations in this direction.

ALSO READ: HKSAR govt to check if concert accident due to negligence

Meanwhile, the LCSD said it will hand over the arena on Saturday as scheduled to the next hirer for holding concerts.

The hirer has agreed to comply and make necessary arrangements to fulfil the three short-term measures announced earlier to ensure the safety of performers, staff members and audiences.

The measures include revisiting and enhancing safety of their stage design, ceasing the use of suspended mechanical devices involving swinging, rotation or carrying of persons, and conducting daily inspection of the mechanical devices.