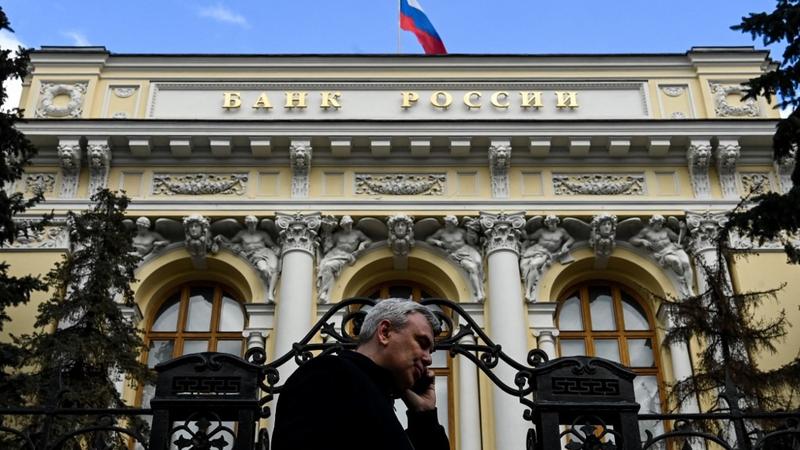 In this March 19, 2021 photo, a man on the phone walks past the Russian Central Bank headquarters as the Russian flag flies, in downtown Moscow. (KIRILL KUDRYAVTSEV / AFP)

MOSCOW - Russia is considering buying the currencies of "friendly" countries such as China, India and Turkey to hold in its National Wealth Fund (NWF), having lost the ability to buy dollars or euros due to sanctions, the central bank said on Friday.

The bank said it was sticking to the policy of a free-floating rouble exchange rate but highlighted that it was important to reinstate a budget rule which diverts excess oil revenues into the rainy day fund.

In a report on its monetary policy for 2023-2025, the central bank said various options on how to return to the fiscal rule and replenish the NWF are now being discussed, taking into account the Western sanctions against Russia.

The Russian Ministry of Finance is working on the possibility of implementing an operational mechanism of the budget rule mechanism for the replenishment/spending of the NWF in currencies of friendly countries (yuan, rupees, Turkish lira and others).

"The Russian Ministry of Finance is working on the possibility of implementing an operational mechanism of the budget rule mechanism for the replenishment/spending of the NWF in currencies of friendly countries (yuan, rupees, Turkish lira and others)," the central bank said.

Under the budget rule, Russia previously bought dollars and euros for the NWF, but not the other currencies. It stopped daily purchases of forex for the fund in early 2022 amid increased volatility in the rouble.

The NWF is managed by the finance ministry but is part of the central bank's international reserves, which also include yuan. These totalled around $640 billion as of February, of which nearly half was frozen under Western sanctions.

The Russian economy will return to growth in 2024 after two years of contraction and inflation will slow to the 4 percent target by then, allowing the central bank to bring the key rate to the 5-6 percent range in 2025, the central bank said.

"Further developments in the Russian economy are characterised by substantial uncertainty... The main challenge in the coming years is to create the conditions for a successful transformation of the economy," the central bank said.

The key interest rate, the main instrument of central bank monetary policy, will average 6.5-8.5 percent next year and will gradually decline to 6-7percent in 2024 and 5-6 percent in 2025, down from 8% as of now, the bank forecasts in its base case scenario.