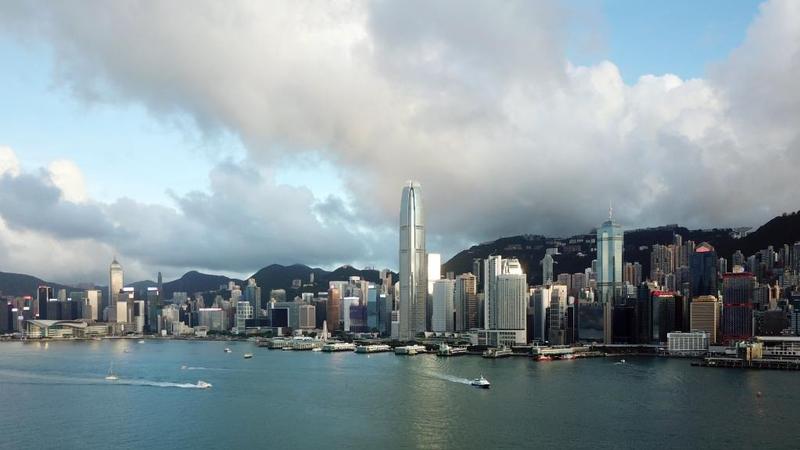 Aerial photo taken on May 29, 2022 shows a view of the Two International Finance Centre (IFC) in Hong Kong. . (LI GANG/XINHUA)

HONG KONG - Hong Kong's economy contracted 1.3 percent in the second quarter from the same period a year earlier, government data showed on Friday, following a weak performance in external trade during the period.

It was the second straight quarter of year-on-year contraction for the Asian financial hub's gross domestic product.

The government revised down its full-year growth forecast to between 0.5 and minus 0.5 percent from between 1 percent and 2 percent, citing a deteriorating global growth outlook, while the underlying inflation estimate for 2022 remained at 2 percent

Seasonally adjusted GDP was 1 percent higher in the second quarter than three months earlier, however.

The second quarter's annual growth pace compared with a decline of 3.9 percent in the previous quarter. The advance estimate for the second quarter had been a 1.4 percent contraction.

COVID-19 restrictions have weighed on the city's economy since early 2020, battering bars, restaurants and shops.

The outlook for the global financial hub was overshadowed by increasing inflation rates globally and an uncertain geopolitical situation, although the prospects of a revival in the mainland economy should offset risks, the government said.

"The markedly deteriorating external environment will weigh heavily on Hong Kong's export performance in the remainder of the year," a government spokesperson said in a statement.

"Elevated inflation in the advanced economies and the aggressive tightening of monetary policy by many major central banks in response will further weaken the global growth momentum, though the expected revival of the mainland economy should provide some offset."

The government revised down its full-year growth forecast to between 0.5 and minus 0.5 percent from between 1 percent and 2 percent, citing a deteriorating global growth outlook, while the underlying inflation estimate for 2022 remained at 2 percent.

The government announced this week to shorten the mandatory hotel quarantine period for all arrivals to three days from seven.

"The (latest quarantine) policy is encouraging for aviation and outbound tourism, but not so much for the overall economy," said Gary Ng, senior economist at Natixis Corporate and Investment Bank.