Group of women ensure the expertise and tradition of the ancient craft of Chongming homespun is passed down to future generations, Xu Xiaomin reports. 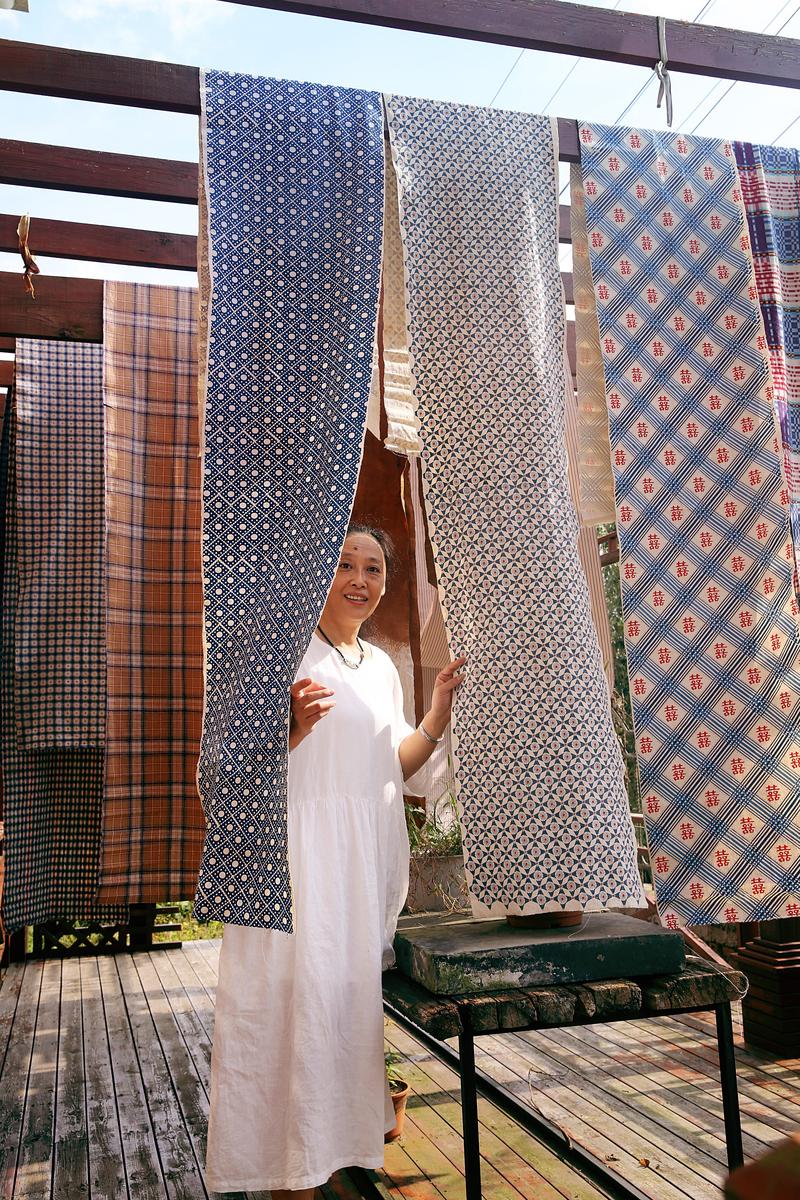 While many companies have been leveraging technology to create new fabrics customized for all kinds of scenarios in the modern age, a small group of women in Shanghai has been doing the exact opposite with their valiant endeavors to revive the popularity of an ancient cloth－Chongming homespun, also known as tubu.

Listed as a city-level intangible cultural heritage, this fabric has a history of about 600 years and used to be one of the biggest products of Chongming island, which is located at the mouth of the Yangtze River about an hour's drive from downtown Shanghai.

Weavers give homespun its first life and designers give it its second. It is only by making this craft part of daily life that it can be inherited and developed by future generations.

He Yongdi, inheritor of Chongming homespun

At its peak, Chongming's homespun industry had 130,000 looms and manufactured related products that were sold around China and in South Asia.

"Almost every local woman, aged over 50, on the island knows how to work a loom. It was a must-have skill in the past," says He Yongdi, an inheritor of the technique behind the fabric and one of the women involved in the revival project.

Fascinated by the craft since her childhood days, He started collecting the homespun fabric since 2000. She would even travel around the island on her bicycle, visiting the homes of residents and interviewing them about the history of the textile.

"Almost every family had dozens of rolls of the fabric just sitting around in their closets," she recalls.

The oldest piece in her collection dates to around the 18th century, but it is still in good condition as most people on the island have a habit of sunning the fabrics to prevent degradation caused by high levels of moisture in the sea air.

Locals store their fabrics in camphorwood chests to prevent damage caused by moths and moisture.

Over the decades, He has amassed a collection of 36 metric tons of Chongming fabrics that feature more than 12,800 patterns.

In 2015, she built a three-story house in her village just to exhibit her collection.

What makes the homespun stand out from other textiles, says He, is its rich patterns, created through a complex weaving process that can generate countless permutations, ensuring that nearly every piece produced is different. 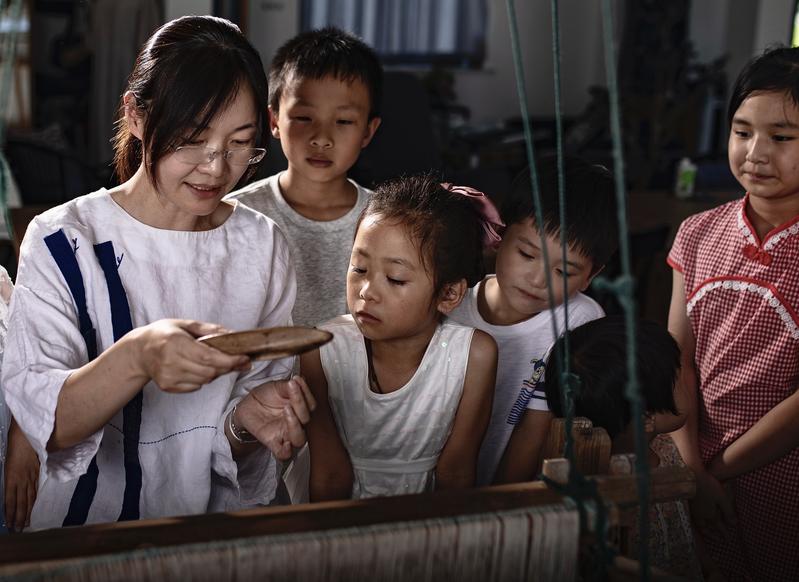 Part of He's efforts to preserve the craft involves deconstructing fabrics from her collection and painstakingly documenting the weaving patterns for posterity. She has also been working with her team to add a modern touch to the ancient craft by creating contemporary-style clothing, handbags, bed linen and plush toys.

In addition, He has been teaching the craft to dozens of young students in Deqing, Zhejiang province, with the goal of getting more youths to earn a living through it.

"Weavers give homespun its first life and designers give it its second," she says. "It is only by making this craft part of daily life that it can be inherited and developed by future generations."

Song Rongyao, another Chongming native, has been going on the same route as He. Since quitting her job as an accountant several years ago, Song has been teaching people how to turn homespun into handbags, mats and other accessories in a studio that she transformed from an old warehouse.

"I wish to encourage more young people to learn about this craft. Weaving is definitely not just for grannies－it is for everyone," she says.

Among those who have developed a liking for the homespun fabric after taking Song's lessons is 23-year-old Xu Jiashu, who now works as a trainee at the studio. In her role, Xu helps Song to sort patterns and collect information that would be used to produce a manual on Chongming homespun patterns.

"The more I learn about this craft, the more I am charmed by its palettes and patterns, as well as its history," says Xu. 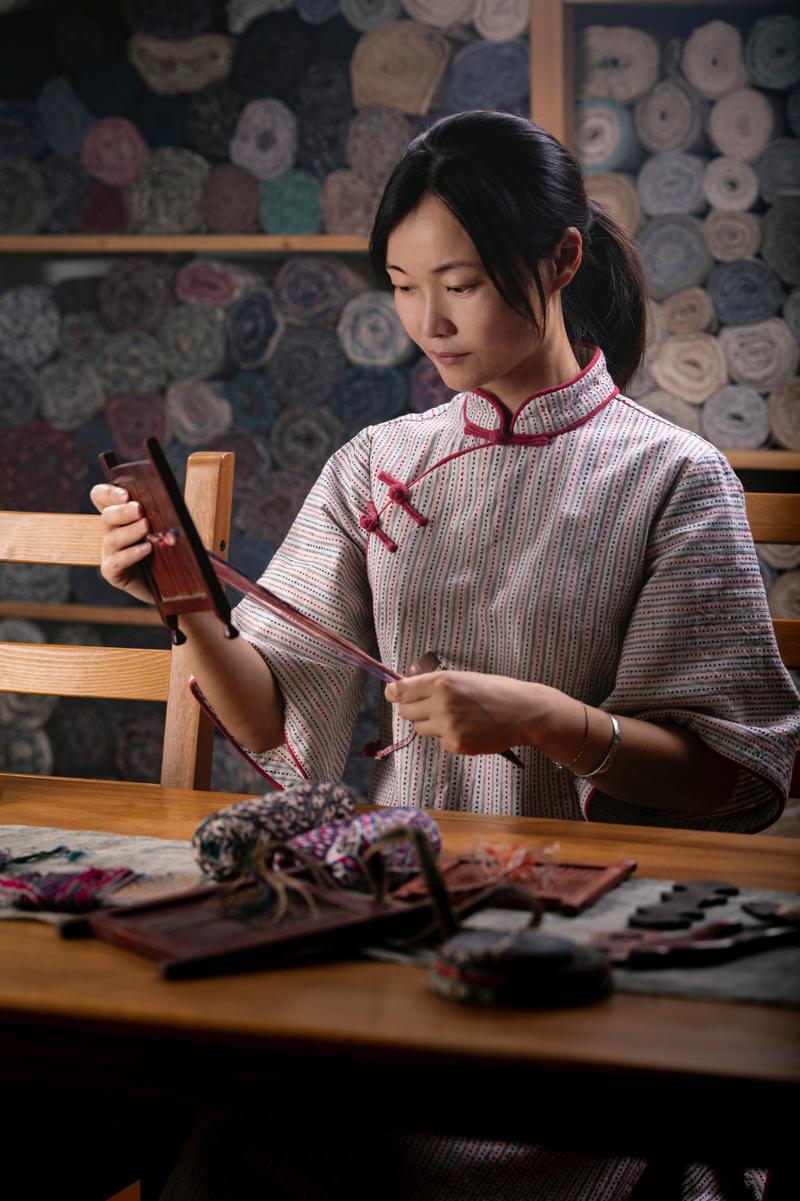 To elderly Chongming natives, weaving the fabric was not simply a means of livelihood. To the women, this craft was once a test of one's eligibility for marriage.

According to a tradition on the island, the fabric created by the bride had to be checked by guests at her wedding, which would then determine if she was qualified to become a housewife.

"This homespun used to be the most important part of a bride's dowry," says Yang Saiping, an experienced weaver.

"The reputation of the bride's family was almost determined by the quantity and quality of the homespun showcased at the wedding," Yang adds.

It was also due to this tradition that an atmosphere of friendly competition was born. According to Yang, girls would learn about weaving from an early age, and mothers would, after seeing what brides had produced for their dowries, teach their daughters how to create even more exquisite patterns.

Yang says weavers often develop a special connection with what they make as they spend lots of time creating a single piece.

"There are about 20 steps involved, from processing cotton into yarn to dyeing to designing and weaving. When you go through all the processes, the time, energy, creativity and emotions you have invested creates a special bond with the fabric," says Yang. "That's the difference between homespun and mass-produced fabrics you buy from stores."

For He, the process of weaving holds special meaning as it is linked to memories of her childhood when she did her schoolwork beside the loom her mother operated.

"Those were special mother-daughter moments. Back then, I'd wear clothes that my mother made. I hardly wore clothes bought from a shop," recalls He.

Homespun is seen as more than just a piece of fabric because people weave patterns that bear special meanings.

For example, brides weave the character jing, an abbreviation of the Chinese idiom jingjing youtiao, which means "life is in good order", on dowry pieces to signify their wishes for a happy marriage.

Plum blossom patterns, on the other hand, signify independence, while the double-happiness pattern of two xi (joy) characters is also widely used on homespun clothes for new couples.

Some patterns even tell stories. For example, one homespun in He's collection is from a Chongming native named Wang Meili, who wove her wedding date and husband's name, "Beijing, Oct 1, Wang Dachun", and double-happiness patterns onto a fabric.

"This homespun is akin to a short diary of Wang's love story," says He. "This is just one example of how Chongming women use textiles to tell their life stories."