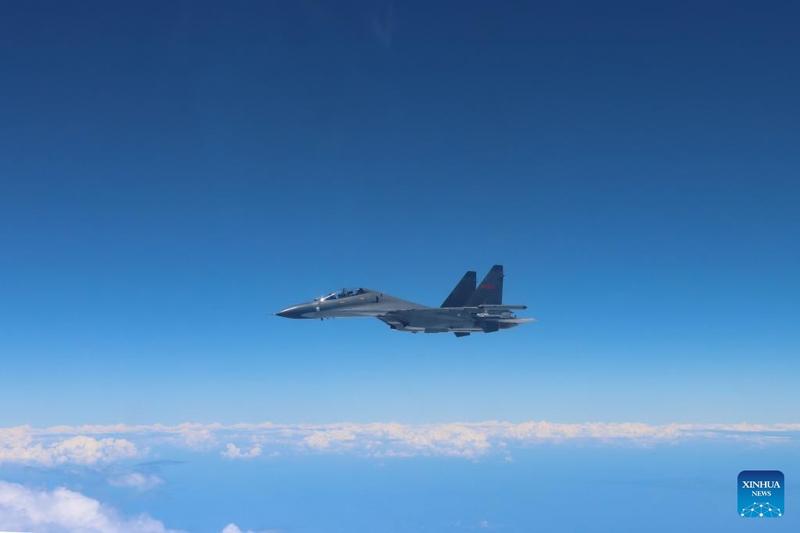 A warplane of the Eastern Theater Command of the Chinese People's Liberation Army (PLA) conducts operations around the Taiwan Island, Aug 4, 2022. (PHOTO / XINHUA)

The Eastern Theater Command of the People's Liberation Army will organize regular combat patrols in the Taiwan region and resolutely safeguard national sovereignty and territorial integrity after successfully completing its recent training exercises around Taiwan, Senior Colonel Shi Yi, a spokesman for the theater command, said in a statement on Wednesday.

The recent military drills in the seas and airspace around Taiwan have achieved their mission objectives and effectively tested the theater command's joint combat capability, he said.

The theater command will keep a close eye on the situation in the Taiwan Straits and continue its military training and war preparation efforts, he added. At the same time, it will organize regular "combat readiness patrols" in the region, Shi said.

The PLA has conducted a series of live-fire exercises this month in the wake of US House Speaker Nancy Pelosi's visit to the island on Aug 2. Over the past week, dozens of ballistic missiles and long-range rockets were fired at targets around Taiwan, while more than 100 aircraft and over 10 destroyers and frigates participated in the exercises. 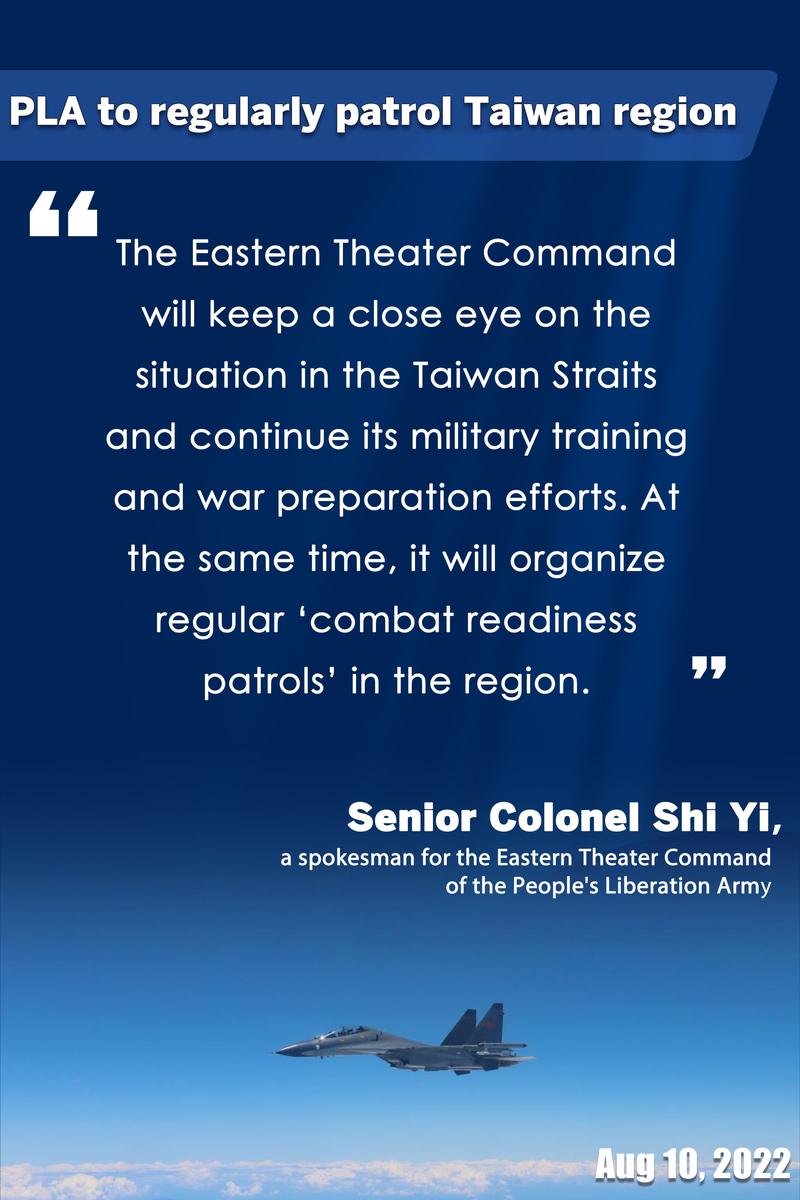 Some of the PLA's top military hardware, such as the J-20 stealth fighter jet and the DF-17 hypersonic ballistic missile, saw action in the recent exercises. Analysts said the exercises had essentially encircled the island, given their unprecedented intensity and scale.

The Ministry of National Defense said in a statement on Wednesday that the PLA's exercises around Taiwan serve as a powerful deterrence to Taiwan separatist forces and foreign interference. "They are justified and necessary actions to protect national sovereignty and territorial integrity," said Senior Colonel Tan Kefei, a ministry spokesman.

Tan said the exercises were open, transparent and professional, and were conducted in accordance with domestic and international laws and practices. Pelosi's visit to the island blatantly challenged and undermined China's core interests and severely damaged peace and stability in the Taiwan Straits, he said.

The island's Democratic Progressive Party has pursued its separatist agenda by colluding with foreign powers, disregarded the safety of Taiwan people and pushed Taiwan into the chasm of calamity. "It will be pinned to history's wall of shame," he said. 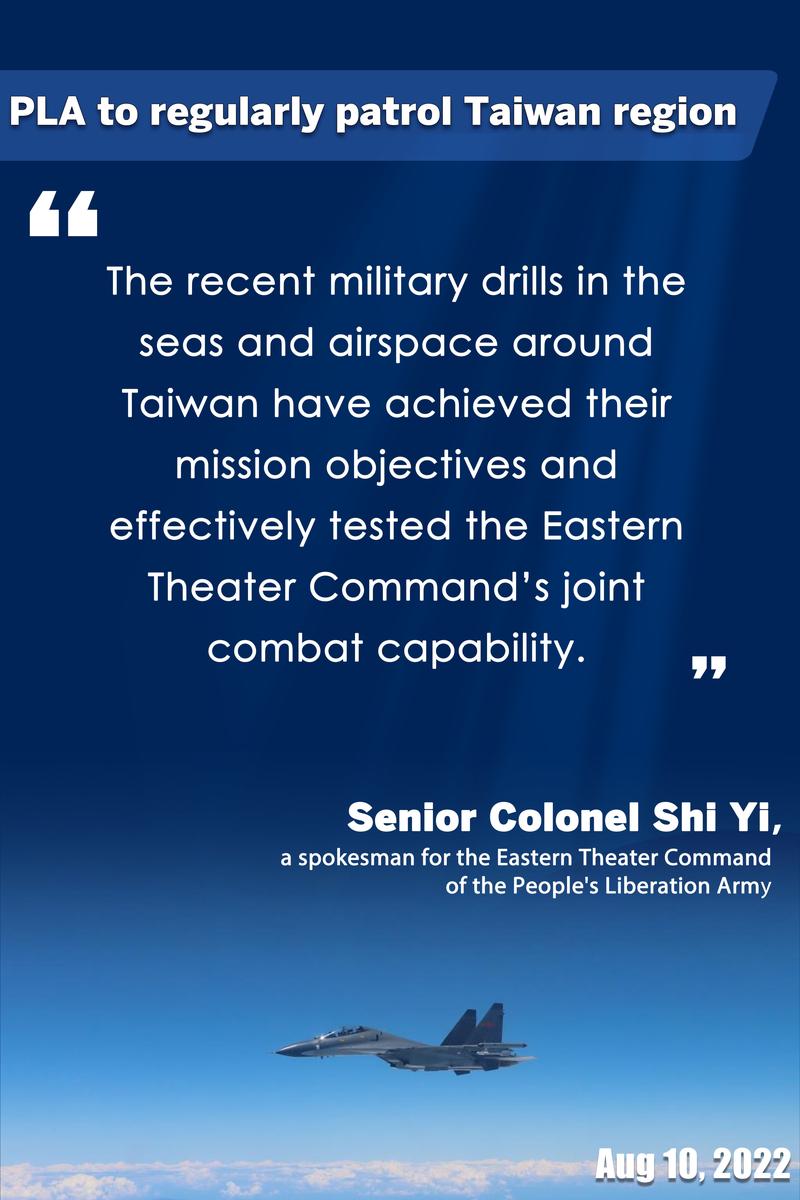 Tan said the process of reunification is unstoppable, and the momentum and opportunity for solving the Taiwan question have always been in the hands of those that support national reunification.

"For the well-being of the Taiwan people, we are willing to exercise utmost sincerity and effort to pursue the prospect of peaceful reunification, but the PLA will leave no room for Taiwan separatist forces and foreign powers to achieve their goals," he said.

Now, cross-Straits relations are once again at a crossroads and Taiwan authorities must make the right choice, Tan added.