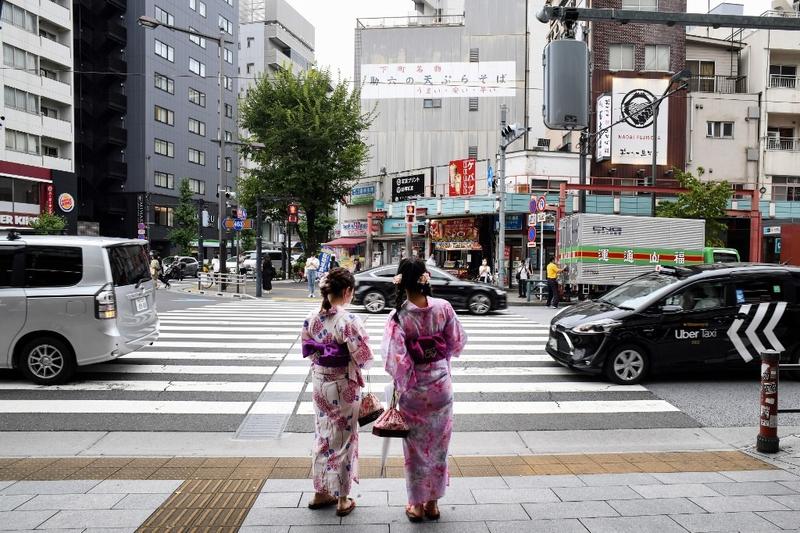 Two young women in traditional dress wait to cross the street in the Asakusa area of Tokyo on Aug 4, 2022. (RICHARD A. BROOKS / AFP)

TOKYO - Japanese wholesale prices rose 8.6 percent in July from a year earlier, data showed on Wednesday, slowing from the previous month's pace in a sign inflationary pressure from higher fuel and raw material costs was easing.

But price growth accelerated for some goods, such as food and machinery, Bank of Japan (BOJ) data showed, suggesting companies continued to pass on rising commodity costs blamed on the Ukraine crisis and the weak yen.

But price growth accelerated for some goods, such as food and machinery, Bank of Japan (BOJ) data showed, suggesting companies continued to pass on rising commodity costs blamed on the Ukraine crisis and the weak yen

The increase in the corporate goods price index (CGPI), which measures the price companies charge each other for their goods and services, marked the 17th straight month of gains but slowed from a revised 9.4 percent rise in June, the data showed.

"Cost-push inflationary pressure will gradually weaken," said Toru Suehiro, an economist at Daiwa Securities. "Inflation may soon peak out," given recent declines in energy costs that affect prices for a wide range of goods, he said.

Petroleum and coal goods prices rose 14.7 percent in July from a year earlier, slowing from a 21.8 percent spike in June.

Other products directly affected by global commodity prices, such as lumber and chemicals, also saw the pace of price increase moderate, the data showed.

By contrast, prices of beverages and foods rose 5.5 percent in July from a year earlier, accelerating from a 4.6 percent gain in June, highlighting the lingering impact of higher input costs.

The yen-based import price index spiked 48.0 percent in July, bigger than a revised 47.6 percent gain in June, a sign the yen's decline was playing a major role in pushing up inflation.

Japan's core consumer inflation remained above the central bank's 2 percent target for a third straight month in June, as the economy faced pressure from high global raw material prices that have pushed up the cost of the country's imports. read more

But the BOJ has repeatedly said it was in no rush to withdraw its massive stimulus, describing recent inflation as driven largely by external factors and unsustainable unless accompanied by stronger wage growth.