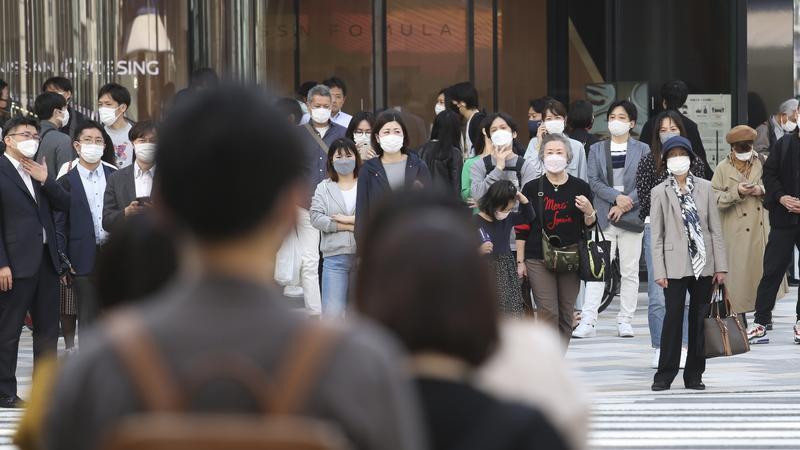 People wearing face masks to protect against the spread of the coronavirus walk on a street in Tokyo, March 14, 2022. (KOJI SASAHARA / AP)

Inflation is also a top issue for voters in an upper house election on Sunday, although Prime Minister Fumio Kishida's ruling party likely to increase the number of seats it holds, according to an opinion poll published on Monday.

Price inflation outpaced nominal total cash earnings in Japan, which rose 1.0 percent in May, down from a downwardly revised 1.3 percent rise the previous month

In May, inflation-adjusted real wages, a key gauge of consumers' purchasing power, fell 1.8 percent from a year earlier, the labour ministry said.

The biggest slump since July 2020 followed a downwardly revised 1.7 percent decline in April.

The consumer price index the ministry uses to calculate real wages, which includes fresh food items but excludes owners' equivalent rent, rose 2.9 percent in May, hovering near 3.0 percent in April that posted the largest jump since October 2014.

Price inflation outpaced nominal total cash earnings, which rose 1.0 percent in May, down from a downwardly revised 1.3 percent rise the previous month, the data showed.

Overtime pay, a barometer of corporate activity strength, rose 5.5 percent year-on-year in May, which was the biggest advance in nine months and higher than April's downwardly revised 5.0 percent growth.

Special payments, which include seasonal bonuses firms often cut when they face headwinds, fell 7.0 percent in May, yet the reading tends to be highly volatile in months other than the June to August and November to January bonus seasons.

The drop in special payments, which marked the biggest fall in 16 months, was the main reason for the slowdown of total cash earnings from April, a health ministry official said.

The following table shows preliminary data for monthly incomes and numbers of workers in May:

To view the full tables, see the labour ministry's website at: http://www.mhlw.go.jp/english/database/db-l/index.html