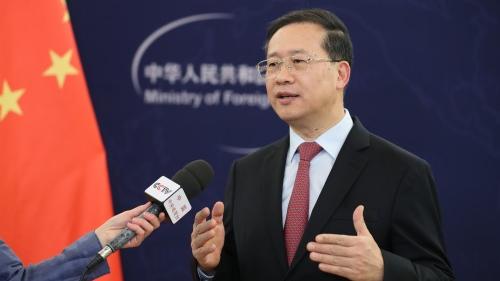 Vice-Foreign Minister Ma Zhaoxu speaks in an interview about the joint statement on nuclear weapons issued by China, France, Russia, Britain and the United States on Jan 3, 2022. (PHOTO / DMPEX.FOC.CN)

Q1: Over the past few days, US House Speaker Nancy Pelosi's visit to Taiwan has caused strong public outrage in China. What's your take on this?

Ma: This is just a political farce, and a dangerous, malicious provocation. Speaker Pelosi made this provocative visit in disregard of China's warning. The visit infringed on China's sovereignty and territorial integrity; violated the one-China principle and provisions in the three China-US joint communiqués; affected the political foundation of China-US relations; and undermined peace and stability across the Taiwan Straits. It is unacceptable to the Chinese people. China has every reason to respond with countermeasures. The incident is also a lesson, revealing to the world US motives to contain China with Taiwan and the intention of the Taiwan authorities to seek American support for independence. In its aftermath, the one-China consensus of the international community emerged stronger, and the US attempt to play the "Taiwan card" and contain China proved more unpopular and futile.

Ma: The one-China principle is the consensus of the international community. It is also the political foundation on which China develops relations with other countries. It is a red line that must not be crossed. What does one China mean? There can only be one answer. That is, there is but one China in the world, Taiwan is part of China, and the Government of the People's Republic of China is the sole legal government representing the whole of China. This is a basic norm of international relations confirmed by UNGA Resolution 2758. It is a commitment made by the US in the three China-US joint communiqués. The principle, written down in black and white, is crystal clear. There is no room for ambiguity or arbitrary interpretation.

The US claims that there is no change in its one-China policy. But in fact, it has been undermining the one-China principle over the years. It has put into its one-China policy some unilateral stuff, including the "Taiwan Relations Act" and the "Six Assurances." This is against international law. China never accepts it, and is always opposed to it.

The US also claims that Pelosi's visit does not violate the one-China policy. The three joint communiqués provide that the US can only maintain cultural, commercial and other unofficial relations with Taiwan. The executive, legislative and judicial branches are all part of the US Government. Pelosi is the number three figure in the US Government. During her stay in Taiwan, she was speaking on behalf of the US from the beginning to the end. Even she herself admits that it is an official visit. If this is not official engagement, then what is it?

Q3: The US claims that the change to the status quo that's prevailed with regard to Taiwan for more than 40 years is coming from Beijing, not from the US What is your view on this?

Ma: So what is the status quo of the Taiwan Straits? The status quo is that both sides of the Straits belong to one and the same China, Taiwan is part of China, and neither China's sovereignty nor its territorial integrity is ever divided. It is not China who is changing the status quo, but the US and the "Taiwan independence" separatist forces.

Over the years, the US has been colluding with the Taiwan authorities, and elevating its substantive relations with Taiwan. It has sold large amounts of weapons to Taiwan, helped it develop so-called "asymmetric capabilities," and emboldened the "Taiwan independence" separatist forces. If these are not changing the status quo, what are they?

Refusing to recognize the 1992 Consensus, the DPP authorities have insisted on pushing for "incremental independence," and redoubled efforts to remove the Chinese identity of Taiwan. If these are not changing the status quo, what are they?

China's countermeasures are a necessary and legitimate response to the provocations by the US and the "Taiwan independence" forces. They are just and lawful.

Q4: The US says it will not seek and does not want a crisis, and China should take full responsibility for the current escalation of tensions in the Taiwan Straits. What is your take on this?

Ma: This is confounding black and white. The crisis is unilaterally provoked by the US Despite China's many representations, the US still allowed Pelosi to visit Taiwan. Faced with this, China has no choice but to fight back and defend its sovereignty and territorial integrity. The responsibility and consequence of the current tensions have to be borne by the US and the "Taiwan independence" separatist forces.

Q5: The US claims that China's military exercise and crossing of the median line of the Taiwan Straits are overreaction that has escalated the situation and threatened regional peace and stability. What is your take?

Ma: It is the US that is threatening peace and stability in the Taiwan Straits. Taiwan is part of China's territory. There is no such thing as a median line in the Straits. The Chinese armed forces conduct military exercises in waters off China's Taiwan island to safeguard sovereignty and territorial integrity of China. Our measures are open and proportionate. They are in line with both domestic law and international law and practices. They are beyond reproach. 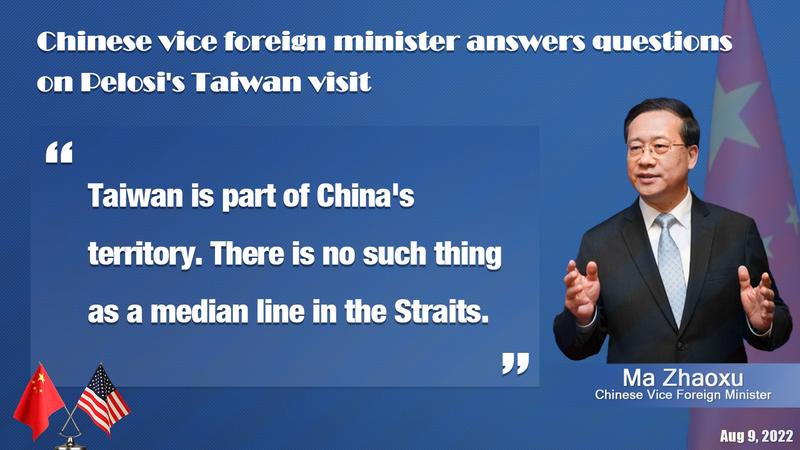 The US and its allies often come to the adjacent waters of China, flexing muscles and stirring up troubles. They conduct up to a hundred military exercises each year. They, instead of someone else, are the ones that overreact and escalate the situation.

Q6: The US claims that China's decision to suspend cooperation with the US in multiple areas does not punish Washington but the whole world. What is your comment?

Ma: The US cannot represent the whole world. China has warned the US well in advance that should Pelosi visit Taiwan, it would cause a crisis and major disruptions to China-US exchange and cooperation. Unfortunately, the US side ignored that, and went ahead with the visit. The Taiwan question is at the very heart of China's core interests. The United States, while undermining China's core interests, is asking for China's cooperation where they need it. What kind of logic is this? China's decision to cancel or suspend cooperation in some areas does not come without warning. We say what we mean and mean what we say. There is no reason why the US should feel surprised or upset.

Let me stress this: As a responsible major country, China will, as always, take an active part in international cooperation on climate change and other matters. We make our own contribution to the tackling of global challenges. What the US should do is to fulfill its international responsibilities and obligations. It should stop making excuses for its own mistakes.

Q7: Some in the US compare China's military drills in the Taiwan Straits to Russia's "invasion of Ukraine," which they claim will be denounced by the international community. What is your comment on that?

Ma: Such a claim is ill-intentioned. The Taiwan question is entirely China's internal affair. It is different from the Ukraine issue. The US always stokes tension and provokes troubles. Preliminary numbers show that between the end of the Second World War and 2001, there were 248 armed conflicts in 153 regions across the world, among which 201 were initiated by the US Since 2001, wars and military operations launched by the US have resulted in over 800,000 deaths and tens of millions displaced from home. After starting so many wars and killing so many civilians to preserve its hegemony, the US is now creating troubles in the Taiwan Straits. How could we possibly allow this to happen?

Q8: A few days ago, the G7 foreign ministers issued a statement regarding Taiwan with negative language, expressing so-called "concern" over China's actions. Meanwhile we see an increasing number of countries and international organizations speaking out in support of China's justified measures. What is your take?

Ma: More than 170 countries and many international organizations have spoken up for what is right, reaffirming their commitment to the one-China principle and expressing support for China in defending its sovereignty and territorial integrity. Both the President of the UN General Assembly and the UN Secretary-General have stated that the UN will continue to adhere to UNGA Resolution 2758, the centerpiece of which is the one-China principle. Compared with over 170 countries, what do G7 think they are? Who cares what they say?

Q9: The US claims that if China continues to take more countermeasures, the US will be forced to respond, which may lead to a spiral of escalation. What is your view on what may happen next?

Ma: It has been proved time and again that the US is the biggest troublemaker of cross-Straits peace and regional stability. If the international community allows the US to do what it wants, the UN Charter will be just a sheet of paper, and the law of the jungle will prevail. In the end, it will be the developing countries that suffer.

The Chinese people are not to be misled by fallacies or scared by evils, and will never waver in defending our core interests. We want to stress to the US: Do not act recklessly, and stop going further down on the doomed path. Give up the attempt to use Taiwan to contain China, play no games but return to the one-China principle and the three joint communiqués, and do right things and take concrete steps to facilitate the steady development of China-US relations. 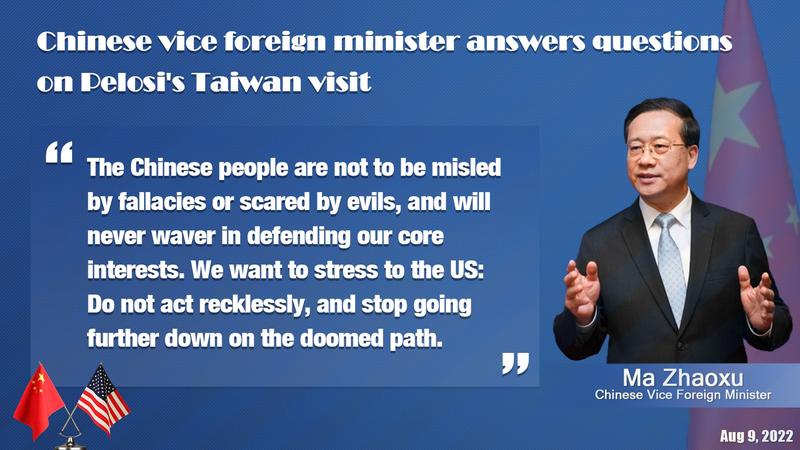