Financial center's GDP doubled over the past decade, ranking fourth in world 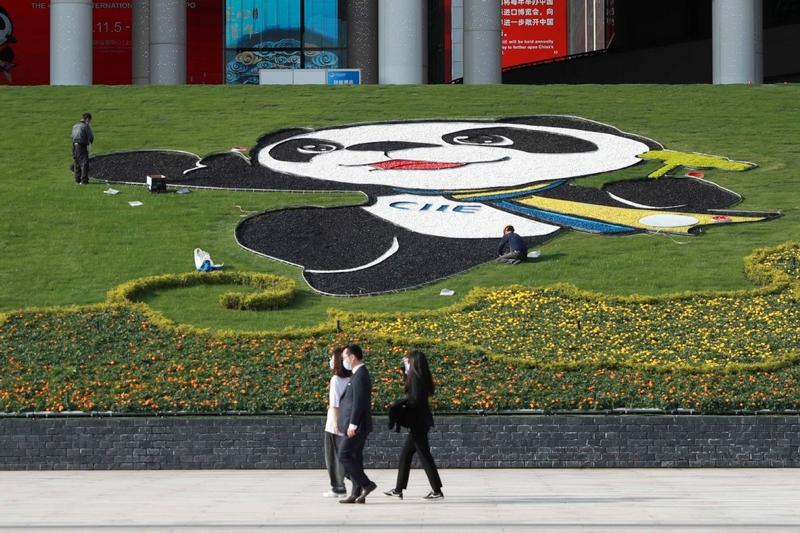 People walk past a garden with an image of Jinbao, the panda mascot of the China International Import Expo, in Shanghai, on Oct 29, 2021. (PHOTO / IC)

Shanghai, which is set to host the fifth edition of the China International Import Expo in November, will continue to embrace global business for its future development, said the city's deputy Party chief on Monday.

Gong Zheng, who is also mayor of Shanghai, said 85 percent of the exhibition space has been booked, and those confirmed as attending include some 270 Fortune 500 companies and industry leaders.

Besides hosting the grand import expo, Shanghai has been tasked with a series of national strategies in the past decade, including establishing the country's first free trade zone, piloting a registration-based initial public offering system on its sci-tech innovation board, and leading the integrated development of the Yangtze River Delta region

"The holding of the annual expo since 2018 demonstrates China's determination to open its domestic market to the world, and its confidence in an open global economy," he said.

As a national-level import-themed trade fair, the expo has accelerated the upgrading of Shanghai as a global trade center, with businesses and logistics integrated with cities in the Yangtze River Delta, China's economic powerhouse, as well as other major trade hubs in the Asia Pacific region, said Gong.

During previous editions of the CIIE, some 3,000 brands have debuted products, an indication that Shanghai is now one of the choice destinations for businesses to launch new products and services, he added.

Jens Hildebrandt, executive director of the German Chamber of Commerce in China, said it has participated in the expo from the very beginning.

"Our companies signed contracts worth $17 billion (last year)…Through the CIIE, small and medium-sized German enterprises were able to boost their sales in the market," he said.

Besides hosting the grand import expo, Shanghai has been tasked with a series of national strategies in the past decade, including establishing the country's first free trade zone, piloting a registration-based initial public offering system on its sci-tech innovation board, and leading the integrated development of the Yangtze River Delta region.

Policies fostering innovation and facilitating trade have taken shape in the Pudong New Area, which was allocated as a "pioneering area for socialist modernization" last year, after it celebrated the 30th anniversary of its opening-up in 2020.

Over the past decade, Shanghai's GDP has doubled from 2.13 trillion yuan ($315 billion) in 2012 to 4.32 trillion yuan in 2021, ranking fourth among cities worldwide and total trading volume in its financial markets jumped from 528 trillion yuan to 2,511 trillion yuan during the same period, according to Gong.

Wu Qing, executive vice-mayor of Shanghai, said opening-up is the biggest advantage for Shanghai and the city government has made attracting global talent and investment its top priority.

"Facing a complex international situation and the grave impact of the COVID-19 outbreak in the first half of this year, Shanghai still maintained growth in actual use of foreign capital, which surpassed $12 billion, and also welcomed 26 new regional headquarters belonging to multinational corporations," said Wu.

Currently, more than 60,000 foreign companies are doing business in Shanghai. A total of 857 multinationals have chosen Shanghai for their regional headquarters, and 516 have established research and development centers in the city.