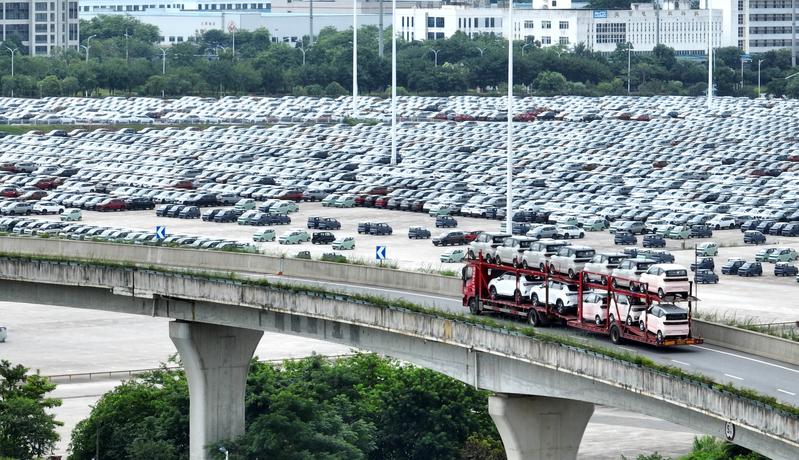 New energy vehicles or NEVs are hitting the fast lane in China, and the sector is expected to help the country's carmakers to overtake international rivals, analysts said.

In June, sales of electric vehicles or EVs and plug-in hybrids reached a record 596,000 units, up 132 percent year-on-year, pushing the overall first-half deliveries to over 2.6 million units and full-year sales estimates to 5.5 million units, said the China Association of Automobile Manufacturers.

Data from the Ministry of Public Security showed there were 10.01 million EVs and plug-in hybrids on the road in China by the end of June.

China started to develop NEVs in 2009 with subsidies, one of the earliest countries to do so in the segment, and became the largest market for such vehicles in 2015.

Since then, the country has ranked first in terms of production and sales for seven straight years, said Xin Guobin, vice-minister of industry and information technology.

Fu Bingfeng, secretary-general of the CAAM, attributed the sector's rise to sustained policy support and technological innovation, which led to growing acceptance among consumers.

Data from the Ministry of Industry and Information Technology showed that central and local authorities have put in place more than 600 policies for NEVs over the past decade.

Compared with international carmakers, local Chinese companies were among the first-movers in the NEV segment, so they are quicker to adopt new technologies and launch new models, said Edward Wang, a J.D. Power China analyst.

"Such innovation is injecting momentum into Chinese brands in a rapid, effective and continuous way," Wang said.

Of the 15 most popular NEV carmakers from January to June, only three were international brands.

Tesla ranked third, and Volkswagen's two joint ventures－FAW-Volkswagen and SAIC Volkswagen－settled for the 14th and 15th places. They had a combined 12.4 percent market share. 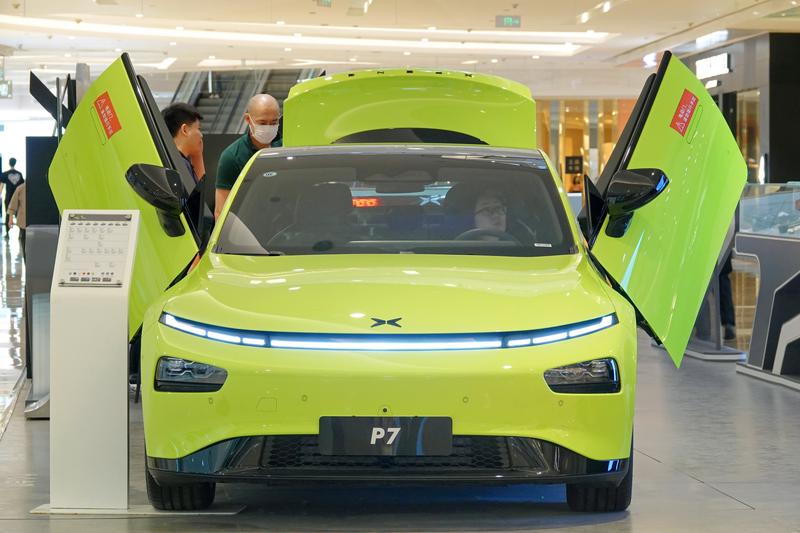 Yang Yue, a 38-year-old bank manager in Beijing, placed an order for an electric P7 from local startup Xpeng in June.

Yang, who also owns a gasoline-powered Infiniti Q50, from the premium arm of Nissan, said he had his first encounter with an EV in February when a colleague who drank at their bank's party asked Yang to drive him home.

The colleague's electric Nio ES6 SUV blew the mind of Yang. "It was completely different. It was so quiet. Acceleration was stunning, and all the novelties including voice-controlled air conditioning were surprising," he said.

The difference was like "between an iPhone and a Nokia, or a Motorola", said Yang. "If you tried electric cars, you are very likely to lose interest in gasoline cars," he said.

"Buyers do not necessarily purchase a model solely because of these functions, but they certainly won't buy a car if it doesn't have them," he said.

Volkswagen CEO Herbert Diess has said the traditional way of introducing car technology from Europe to China is no longer applicable in the age of software-defined vehicles.

In a Sina Weibo post in July, he said Volkswagen needs to catch up with Chinese carmakers who are "really fast" in terms of onboard experience and autonomous driving.

To do so, Volkswagen established the first subsidiary of its software company Cariad in China earlier this year.

Diess said: "We are going to have software kits in China, for China. I am convinced that we are going to be really, really fast, because China is so fast."

Xu Huixiong, an auto analyst at Essence Securities, said the NEV sector is boosting the development of China's auto industry as a whole.

The securities firm's analytics showed that seven out of the top 10 premium models priced over 200,000 yuan ($29,608) in 2021 were from local Chinese marques, with the other three coming from Tesla and BMW.

"Prior to 2021, over 90 percent of models at this price came from international brands," he said. 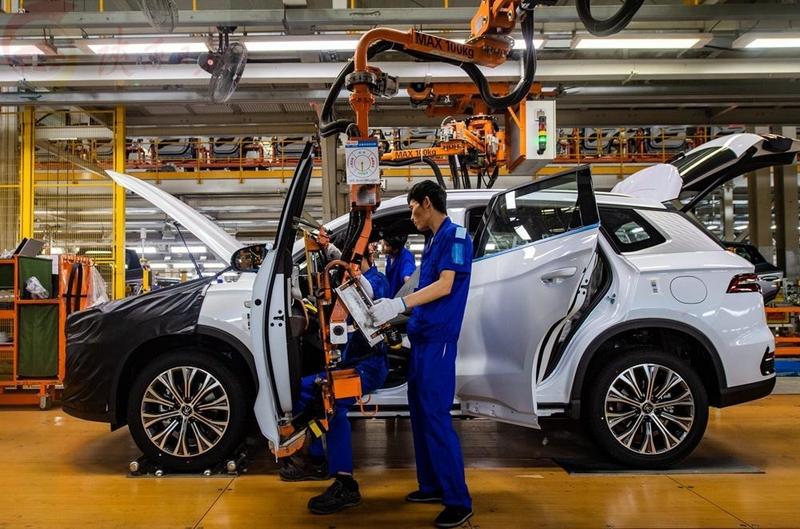 Workers assemble a vehicle on the production line at a plant of BYD, China's leading NEV manufacturer, in Xi'an, Shaanxi province, on July 5. (YUAN JINGZHI / FOR CHINA DAILY)

Attracted to China's market, international carmakers are scaling up their investment in the country.

The plant, which is due to be completed by the end of 2024, is designed to produce more than 150,000 vehicles a year based on the Premium Platform Electric, or PPE, platform Audi has developed with Porsche, another German premium brand.

Markus Duesmann, chairman of Audi's board of management, said: "We are bringing PPE to China. This means electric Audi models from China, for China."

Audi China President Juergen Unser described the joint venture as an important part of the carmaker's new growth strategy in China, its largest market globally. "In the years to come, we want to put an even stronger emphasis on China. The goal of our new strategy is to make Audi in China even more Chinese."

Tesla Inc has scaled up the capacity of its Shanghai plant into the largest of its global production network. The Shanghai facility is now able to produce 750,000 vehicles annually, 100,000 units more than Tesla's Fremont plant in California.

They are followed by gigafactories in Texas and Germany, each having an annual production capacity of 250,000 units. The carmaker made the Shanghai plant a major global export hub in the middle of 2021.

In the first half, the plant produced 294,800 vehicles, of which 97,182 were shipped overseas, according to the China Passenger Car Association. Tesla's exports accounted for 48 percent of China's NEV exports from January to June, the association said.

Grace Tao, vice-president of Tesla, told reporters in June that the Shanghai plant is the carmaker's most important production center and export hub, calling Shanghai-made Tesla vehicles a "business card of Chinese manufacturing".

Tao said over 50 percent of Tesla's global deliveries in 2021 were made at the Shanghai plant, which is also the first wholly foreign-owned car-producing factory in the country.

Martin Heung, a China EV analyst at Nomura, said this is because China has developed a relatively sound production system.

"Making a car is not like making a coat. Car production requires a long supply chain ranging from glass and interior materials to electric motors and chips, especially batteries," he said.

"Over the past decade China has built a sound industrial chain, and Chinese battery makers, compared with their South Korean and Japanese rivals, have a cost advantage because of their production volume."

Of the top three battery makers globally, two are Chinese ones: CATL and BYD ranked first and third, according to SNE Research. Both are sought by international carmakers.

In late July, Ford inked an agreement with CATL to acquire battery packs for its vehicles produced in North America, China and Europe, including the electric Mustang Mach-E and the electric pickup F-150 Lightning.

CATL, the world's largest auto battery maker, said that it has also supplied EV batteries to South Korea's Kia Corp, which marked the first entry of a non-South Korean battery brand into the market.

Earlier this year, CATL received approval to produce battery cells in its factory in the German federal state of Thuringia. The new plant, CATL's first factory outside of China, has a total investment of 1.8 billion euros.

As for other battery players, BYD sells batteries to international carmakers such as Toyota, Ford and Mercedes. Volkswagen has acquired a major stake in Chinese battery maker Gotion, which was the world's seventh-largest in the first half.

Headquartered in Hefei, Anhui province, Gotion will help produce battery cells at Volkswagen's plant in Salzgitter, Germany, with production expected to start in 2025. The battery maker will serve as a technology partner "for the cell factory layout, machinery and production processes", said Volkswagen.