Beijing cyclists take to the road in numbers

New measures make life safer for those pedaling in the capital 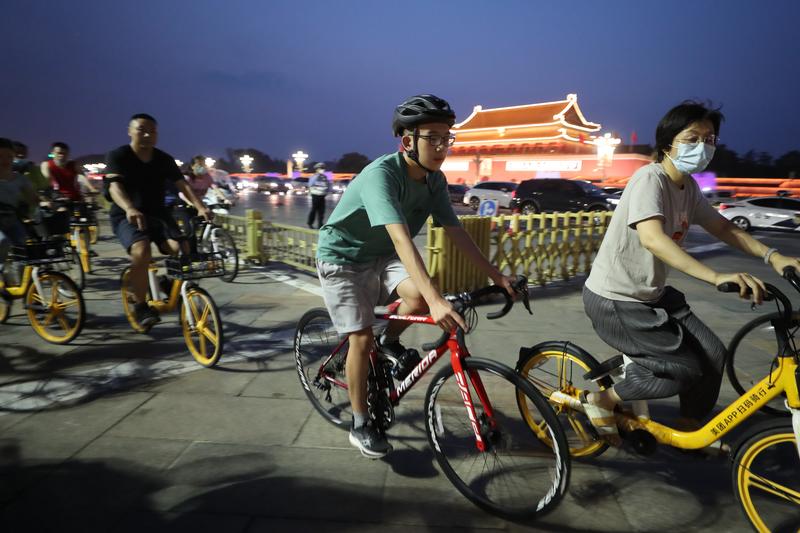 Cyclists pass through Tian'anmen Square in Beijing last month during an evening ride along Chang'an Avenue, where many of them take photos of the area at sunset. (WANG JING / CHINA DAILY)

Qian Jiaqi, 39, who took up cycling in Beijing as a hobby when he was a teenager, has seen a well-known route he often takes after work become increasingly crowded with fellow cyclists during evenings and weekends.

"This summer on Chang'an Avenue, it's like the Tour de France every night as cyclists on a wide range of bikes constantly try to overtake each other," Qian said. "On the avenue, traffic jams are now forming in bike lanes, as well as in those designated for motor vehicles. It's quite funny in a way."

When I ride, I only focus on the road ahead. All the concerns about work and family are put on hold. It’s like a mini escape.

According to business insiders and experienced cyclists such as Qian, cycling in urban areas has become increasingly popular over the past two years in China, which was known as the "Kingdom of Bicycles" in the 1980s and early 1990s.

The emergence of COVID-19, the introduction of cycle lanes and the pursuit of healthier lifestyles have helped reignite the nation's passion for cycling.

Chang'an Avenue is arguably the most popular route for cyclists in Beijing, with its two cycle lanes positioned alongside those for motor vehicles. Motorcycles were banned from the cycle lanes on May 9 last year, providing a safer and smoother experience for those turning the pedals. Chinese scholar trees planted alongside the bike lanes shade cyclists from the summer heat.

The avenue is also the perfect place to observe different types of leisure cyclists. Those such as Qian always attempt to improve their times, so it's easy to sense their frustration when they have to stop at red lights. Others prefer to ride at a slower pace, never missing the opportunity to take photos of Tian'anmen Square at sunset on their phones.

Cyclists using shared bikes may decide to venture somewhere on the spur of the moment. They relish the joy of traveling along a cycle lane adorned with fragrant scholar trees in summer.

Qian said: "Many people have discovered the therapeutic benefits of cycling during the COVID-19 epidemic. The measures taken to control outbreaks of the disease have resulted in the public yearning for activities that give them the feeling of freedom and which are good for their health. Cycling ticks all the boxes." 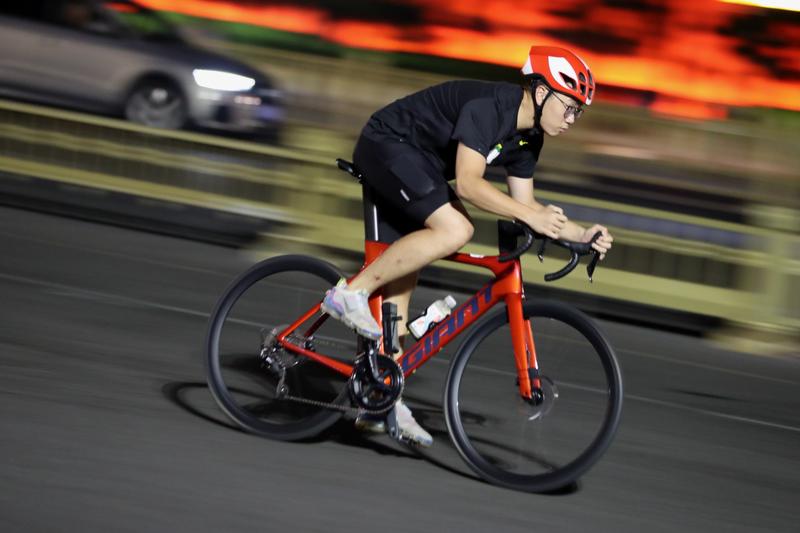 There is no need to show a health code or wear a face mask while cycling, and Qian said that instead of relying on gyms that can be closed suddenly to contain outbreaks, people can cycle at any time to wherever they want to go－getting all the exercise they need in the process.

"The epidemic has had little effect on cycling. Furthermore, as they cruise the city on bikes, cyclists experience a taste of life before COVID-19 emerged," he added.

Qian and many others find cycling a great way to relieve stress, which has become an issue of concern for many people during the epidemic.

"When I ride, I only focus on the road ahead. All the concerns about work and family are put on hold. It's like a mini escape," said Qian, who often cycles around the 65.3-kilometer Fourth Ring Road in Beijing after work, reaching an average speed of 26.3 km/h.

In 2018, a study of more than 1 million people in The Lancet medical journal confirmed that cycling is one of the top activities to relieve stress. According to the study, cyclists experience 21.6 percent fewer days of poor mental health compared with those who don't take to the saddle, as the activity helps create positive endorphins in the brain.

Qian said cycling is also an ideal outdoor activity for families, as parents and children obviously cannot use their phones and digital tablets when they are on bikes. As a result, they enjoy quality time together.

It is no surprise that there has been a clear rise in the number of leisure cyclists in the past year, Qian said. He has also noticed that many newcomers to cycling are willing to spend large amounts on premium bikes, clothing and accessories－a reflection of rising income levels and living standards in the pursuit of healthier lifestyles.

"There are all sorts of premium road and mountain bikes on the roads of Beijing. Influenced by social media posts, many people choose to buy premium cycles as starter bikes simply because these machines look good and they can afford them," Qian said. 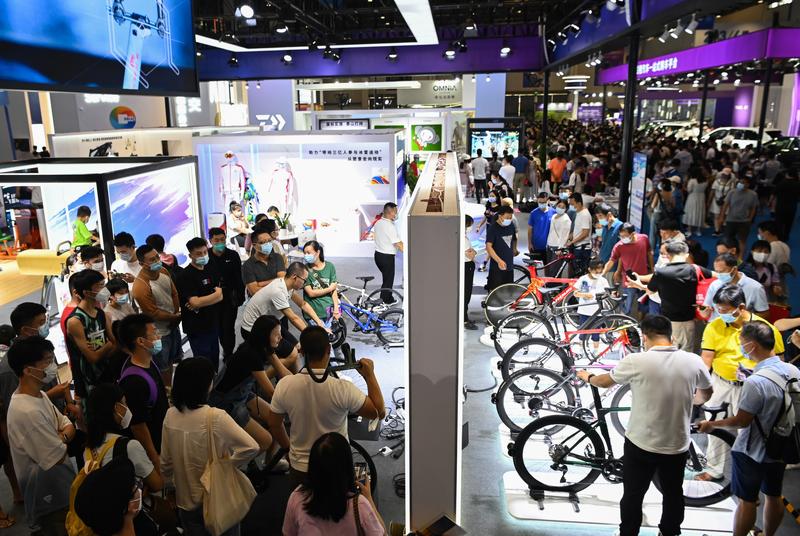 Luo Xue, 31, an experienced cyclist who runs a bike workshop in Beijing, said the number of cyclists in China has soared in the past two years. "I don't even have time for a full interview－that's how busy I am as a result of the booming domestic cycling industry," he said.

Many Chinese have a strong attachment to cycling, which was their main means of transportation as they grew up, Luo said, adding that the epidemic has rekindled such enthusiasm.

"When people are advised to minimize traveling outside their city or province to contain outbreaks of COVID-19, they view cycling to the suburbs or the countryside as the perfect getaway," Luo added.

New cyclists routinely opt for premium bikes, Luo said, adding: "They often obtain information about bikes from social media, and they want the best. I often suggest that such buyers find a bike that suits their needs, and that they should gradually build up from there."

"Never underestimate the value of the bikes you see on the streets, because they may be more expensive than your car," he added.

Luo, who has gained a good reputation among cycling fans, has been working flat out for some time to cope with the demands off riders nationwide.

"In addition to customizing and repairing bikes, I offer consultations to 20 to 30 riders from around the country each day. There is always a long list of new friend requests on my WeChat account," he said.

Meanwhile, the cycling industry has benefited from the emergence of COVID-19.According to Giant Group, one the world's biggest manufacturers of bicycles, demand remained robust last year, when bikes were in short supply. The company, which is based in Taiwan, has enjoyed significant growth on the Chinese mainland.

Last year, its annual consolidated revenue reached the equivalent of nearly $2.6 billion－a record high, according to its financial report published in March.

Demand for bikes has soared since 2020, particularly during last year because of the pandemic, with more people caring about their health and longing for exercise outdoors, the company added.

Last year, Phoenix Bicycle, which is based in Shanghai, saw its revenue reach 2.05 billion yuan, a year-on-year rise of nearly 50 percent, according to the company's annual report. Its net profit rose by just over 71 percent year-on-year.

Qian said a long waiting list has formed for popular brands as more people buy bikes and take to the road.

"Last month, I placed an order with Trek, a trendy brand in the United States, for a bicycle costing 30,000 yuan, but I won't get the bike until October. All the current stock of imported bikes has sold out in China, but it's always good to see more people enjoying cycling," he said. 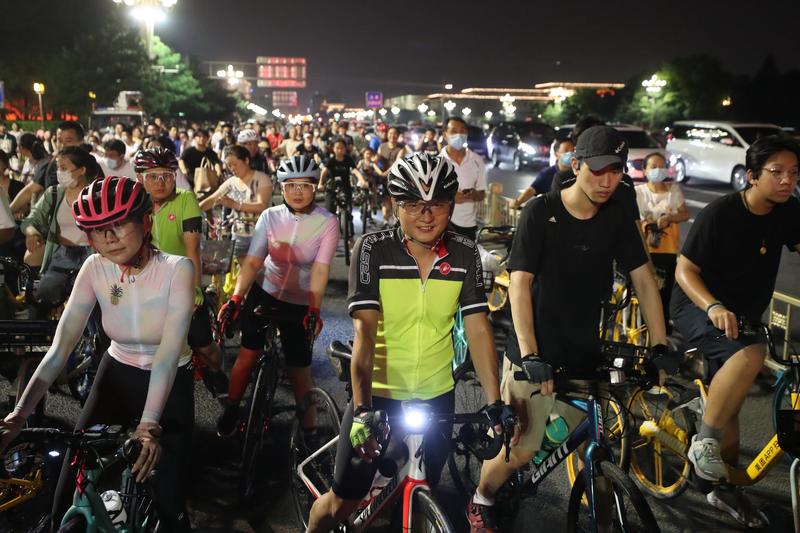 Wang Qianqian, 29, who works for an investment company in Beijing's Central Business District, said she used to travel to work by subway, but when Yong'anli station near her office was closed in May due to epidemic control measures, she started to use a shared bike.

"I really enjoy the 45-minute rides to and from work. I have also started to notice more things, such as small restaurants that I have never seen recommended on Dianping, a restaurant- and store-rating platform. I have also seen new businesses opening amid the epidemic, which is really uplifting," Wang said.

During weekends, she explores the capital, visiting her favorite coffee shops on shared bikes. "It feels great to travel the city at a slower pace. I also decided to buy a proper road bike and make cycling part of my daily routine," she said.

Wang's budget for the bike was about 5,000 yuan, but she ended up paying about 8,000 yuan. "The bike was hanging from a wall in the shop. Its neon-green frame caught my eye, and I knew it was the one for me. I didn't think for long about its performance," she said.

For the past two months, Wang has cycled regularly for work and leisure. She has also joined a group of cyclists who often ride to the suburbs of Beijing.

In addition to having fun and making new friends, she has lost 4 kilograms in weight and gained a healthy tan. "As I ride more, I notice that Beijing has become increasingly cyclist-friendly, and I hear that it's going to get even better," Wang said.

Many Chinese cities, including Beijing, have been improving slower forms of travel to encourage more people to adopt environmentally friendly lifestyles.

According to the Beijing Municipal Commission of Transport, the city's roads network is being continuously improved for cyclists and pedestrians. Nearly 48 percent of residents opted to use nonmotorized means of transportation in central areas of the capital last year, a 10-year high.

This year, 74 left-turn lanes have been introduced for cyclists at intersections in Beijing, and traffic rules for pedestrians and vehicles, including nonmotorized ones, have been reinforced, according to Jing Lubo, an official in the commission's urban road management office. In particular, the cycle lanes on the Second Ring Road have been widened to 3 meters.

"The resurgence of nonmotorized transportation is gradually reshaping life in the capital," Jing said.

The city is planning to widen more cycle lanes and introduce new ones this year, with the aim of eventually establishing a slow-travel network.

Beijing's first designated cycle lane opened in May 2019. The 6.5-kilometer route connects Huilongguan, a densely populated community in the northern district of Changping, and Shangdi, home to numerous high-tech companies. The lane has been dubbed the "highway of bikes", as cyclists using it cut commuting time between the two places by 32 percent compared with traveling by car.

The lane has been used more than 5.24 million times since it opened, reducing carbon emissions by over 1,500 metric tons, the transport commission said, adding that the lane will be expanded this year.

Shared bikes have also become an important mode of transportation in Beijing. There are about 950,000 such bikes in the city, and they were used more than 950 million times last year.

Qian, the cyclist, said Beijing's traffic infrastructure has become more friendly for cyclists, but many administrative issues remain to be resolved.

"Bike lanes used as parking spaces are a top concern for cyclists, but in a city with so many cars, I realize that it's difficult to find a solution that pleases cyclists and motorists," Qian added.

He said cyclists have been severely injured after crashing into car doors opened suddenly by careless drivers parking in cycle lanes.

Jing said that as well as improving infrastructure, better administration is key to making cycling safer and more comfortable. "According to the plan for Beijing's slow travel system from 2020 to 2035, cyclists' right of way will be further protected," he said.

Luo, the bike shop owner, said the cycling boom will continue. "With the support of local governments around China, more people will find cycling a good way to commute and good for their health. The glory days of the 'Kingdom of Bicycles' have returned," he added.