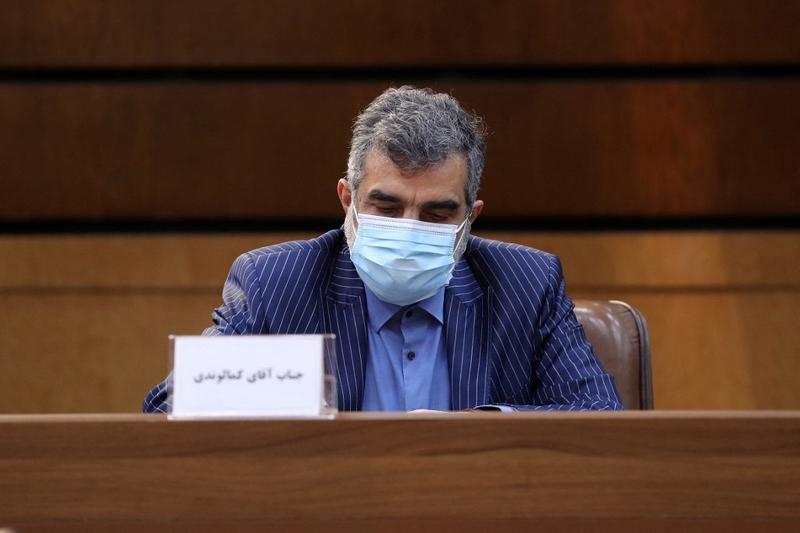 A handout picture provided by the Iranian presidential office on April 10, 2021, shows the head of the Atomic Energy Organisation of Iran (AEIO) spokesman Behrouz Kamalvandi listening as the country's president (not pictured) delivers a speech on Iran's National Nuclear Technology Day, in the capital Tehran. (IRANIAN PRESIDENCY / AFP)

TEHRAN - Iran's negotiating team is discussing the safeguards issues in the Vienna talks, according to the official news agency IRNA.

Behrouz Kamalvandi, the spokesman of the Atomic Energy Organization of Iran, made the remarks on the sidelines of a meeting between the Iranian negotiating team and the European Union deputy foreign policy chief Enrique Mora.

The new round of talks to revive the nuclear deal, formally known as the Joint Comprehensive Plan of Action (JCPOA), began in Vienna on Thursday after a five-month hiatus

With regard to the progress of the new round of the Vienna talks on the revival of a 2015 agreement, Kamalvandi said "not bad."

Under the Non-Proliferation Treaty (NPT) safeguards agreement and the additional protocol, Iran is obligated to declare its nuclear activities and materials to the International Atomic Energy Agency (IAEA).

Recently, the IAEA's Board of Governors adopted an anti-Tehran resolution proposed by the United States and its three European allies, Britain, France, and Germany, accusing Iran of non-cooperation with the agency.

Following the move, Iran has begun injecting uranium gas into advanced centrifuges and disconnected some of the IAEA's cameras monitoring its sites outside the NPT safeguards agreement.

The new round of talks to revive the nuclear deal, formally known as the Joint Comprehensive Plan of Action (JCPOA), began in Vienna on Thursday after a five-month hiatus.

Iran signed the nuclear deal with world powers in July 2015, agreeing to curb its nuclear program in return for the removal of sanctions on the country. However, former US President Donald Trump pulled Washington out of the agreement and reimposed unilateral sanctions on Tehran, prompting the latter to drop some of its commitments under the pact.

The talks on reviving the JCPOA began in April 2021 in the Austrian capital but were suspended in March this year because of political differences between Tehran and Washington.