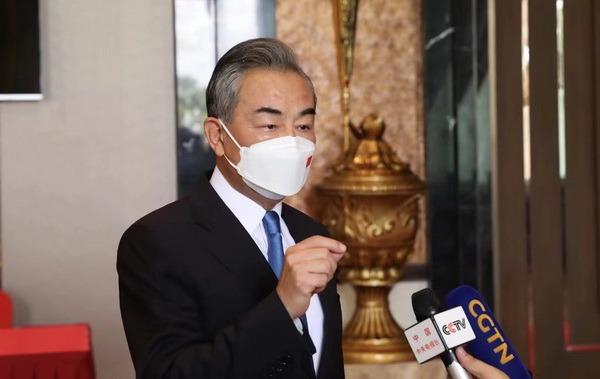 State Councilor and Foreign Minister Wang Yi speaks about China's solemn position on US House Speaker Nancy Pelosi's visit to China's Taiwan region while talking to reporters on the sidelines of foreign ministers' meetings on East Asia cooperation and his visit to Cambodia, in Phnom Penh, on Aug 3, 2022. (PHOTO / FMPRC.GOV.CN)

Wang also called for countries to support China's legitimate position and measures on the Taiwan question.

He made the remarks on the sidelines of ASEAN-plus foreign ministers' meetings in Phnom Penh, Cambodia while further expressing China's position on the US House Speaker Nancy Pelosi's visit to Taiwan.

Noting the visit was plotted and instigated by Washington, Wang said the US has trampled on international law, violated its commitment to China, damaged peace across the Taiwan Straits, supported separatism and clamored for bloc confrontation.

Separatist elements and extreme forces would intensify their actions and the hard-won peace and stability in the region would be severely damaged.

"Pelosi's visit to Taiwan is another bankruptcy of US politics, diplomacy and credibility as a country and a testament that the US is 'the biggest peace destroyer' across the Taiwan Straits and 'the biggest troublemaker' for regional stability," Wang said.

"It also suggests that the US' Indo-Pacific Strategy is extremely confrontational and harmful, and demonstrates US hypocrisy and double standards on international rules," Wang added.

Wang stressed that the US' acts amount to an open provocation against Chinese people and peace-loving people of countries in the region, which is a political gamble that is bound to bring about appalling effects.

"If China does not resolutely counter the US' manic, irresponsible and extremely irrational deeds, the international principles of respecting sovereignty and territorial integrity would simply become a piece of blank paper," Wang said.

"Separatist elements and extreme forces would intensify their actions and the hard-won peace and stability in the region would be severely damaged," he added.

Wang said that China has made the utmost diplomatic efforts to try to avoid the crisis and, in the meantime, Beijing would never allow its core interests and the process of national reunification to be jeopardized.

"China would not sit idle by and let the US play the 'Taiwan card' to serve its domestic politics and politicians' self-interests, neither will China tolerate acts of creating tension, provoking confrontation and instigating division," Wang added.

Wang said the comprehensive measures China has taken now and will take later, through prudent consideration and careful review, “are a necessary and timely defense and are countermeasures to safeguard its national sovereignty and security”.

"They are also in line with the international law and China's domestic law, serving as a warning to provocateurs and helping safeguard regional stability and peace across the Taiwan Straits," he added.

Wang called on parties to see clearly the causes and nature of the crisis to jointly oppose US provocations and to safeguard peace in the region and across the Taiwan Straits.