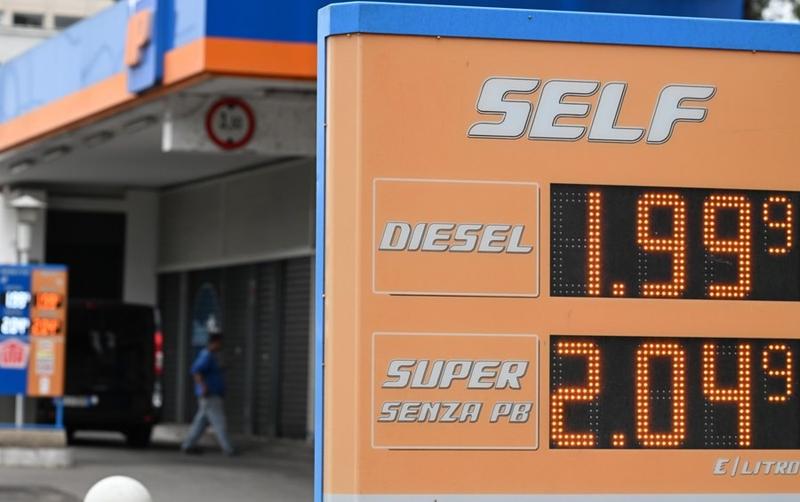 Gasoline and diesel prices are displayed near a gas station in Rome, Italy, June 23, 2022. (PHOTO / XINHUA)

Just one of five turbines is now whirring within the Nord Stream 1 pipeline, the chief artery that pumps gas from Russia to Europe. Previously reduced capacity was once again reduced to 20 percent on Wednesday by the Russian energy company Gazprom, raising fears of a total shut off.

Russia said it is impossible to run the pipeline effectively, since foreign sanctions have delayed the repair and return of turbines, which are made and serviced abroad.

As the dispute rumbles on, European leaders are preparing for a worst-case scenario involving an unprecedented prolonged cut-off of all Russian gas, which made up 47 percent of European Union imports last year.

The bloc's current strategy involves three key measures: increased supply from non-Russian sources; reducing overall demand, with member states agreeing to a voluntary 15 percent cut from August to March; and setting up a joint gas storage mechanism, which is now around two-thirds full. Stores would need to reach 90 percent to get Europe through the winter, said the International Energy Agency, or IEA.

"And even then, it could still face supply disruptions in the latter part of the heating season," IEA Executive Director Fatih Birol said.

If supply remains low or is totally shut off, the geopolitical and economic ramifications will be significant.

European countries that import comparatively little Russian gas, such as Spain and the United Kingdom, will still contend with rising costs, according to a new working paper from the International Monetary Fund, and more exposed countries in central and eastern Europe could face outright gas shortages and see GDP losses of as much as 6 percent.

Meanwhile, gas exporters have benefited from the situation. The United States became the world's largest exporter of liquefied natural gas in the first half of this year, with two-thirds of exports going to Europe.

"A new LNG trade, built on long-term contracts, will develop between the US and EU," said David Evans, a senior counsel at the international law firm Clifford Chance.

Nord Stream 1 generally supplies about 40 percent of Gazprom's gas delivery to Europe via a pipeline that runs beneath the Nordic Seas. At the beginning of June, five turbines ran at full capacity, but a series of pay disputes and turbine issues sent capacity fluctuating, from 85 percent in mid-June to 40 percent at the beginning of last week, with a brief maintenance period in between, when no gas ran through the pipeline.