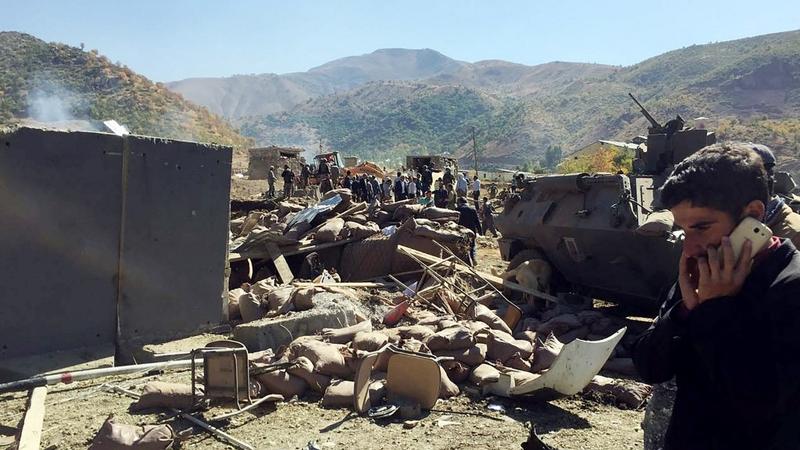 Smokes rise after Kurdish militants detonated a car bomb outside a military station in Semdinli near the border with Iraq, on Oct 9, 2016. Citing a statement by the Turkish Armed Forces, the Anadolu Agency said the attack was the work of the Kurdistan Workers' Party (PKK). (STRINGER / IHLAS NEWS AGENCY / AFP)

BAGHDAD - Iraq on Saturday requested an urgent meeting of the UN Security Council after the deadly bombardment on a resort in Iraq's northern province of Duhok.

"The ministry submitted a complaint to the Security Council and requested an urgent meeting to discuss the Turkish attack, which resulted in the killing and wounding of many civilians, in Duhok Province," said Iraqi Foreign Ministry Spokesman Ahmed al-Sahaf said in a statement.

A suspected Turkish bombardment hit a Duhok resort in Iraq's semi-autonomous region of Kurdistan on Wednesday, leaving nine civilians dead and dozens wounded. The Iraqi government accuses the Turkish forces of carrying out the attack, a charge Ankara has denied

A suspected Turkish bombardment hit a Duhok resort in Iraq's semi-autonomous region of Kurdistan on Wednesday, leaving nine civilians dead and dozens wounded. The Iraqi government accuses the Turkish forces of carrying out the attack, a charge Ankara has denied.

Also on Saturday, the Iraqi parliament held an urgent session, with the presence of Foreign Minister Fuad Hussein, Defense Minister Juma Inad and some top military commanders, to discuss the bombardment on the Iraqi territories.

Hussein said during the session that diplomacy should be used to resolve the conflict and that military escalation with Türkiye avoided, a source in the parliament told Xinhua.

He demanded the issues of the presence of the Turkish military forces and the Kurdistan Workers' Party (PKK) inside Iraqi territory be addressed, added the source who wished to remain anonymous.

On Thursday, the Iraqi Foreign Ministry handed a sternly worded protest note to Turkish Ambassador to Iraq Ali Reza Guney over the deadly resort bombardment in Duhok, demanding the withdrawal of Turkish forces from Iraqi territory.

Turkish forces frequently carry out ground operations, airstrikes, and artillery bombardments in Iraq's Kurdistan, especially the Qandil Mountains, the main base of the PKK.

The PKK, listed as a terrorist organization by Türkiye, the United States and the European Union, has been rebelling against the Turkish government for more than three decades.