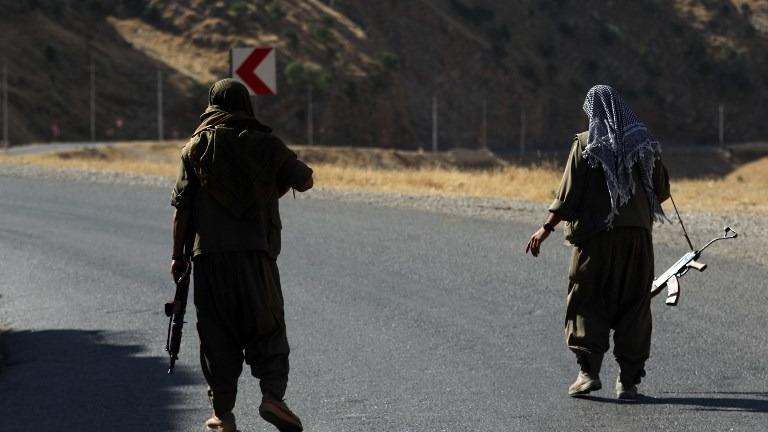 A member of the Kurdistan Workers' Party (PKK) carries an automatic rifle on a road in the Qandil Mountains, the PKK headquarters in northern Iraq, on June 22, 2018. (SAFIN HAMED / AFP)

ANKARA - Türkiye's Foreign Ministry on Saturday summoned the Swedish charges d'affaires in Ankara over the "terrorist propaganda" staged by the supporters of the outlawed Kurdistan Workers' Party (PKK) during a protest on Thursday in the Swedish city of Gothenburg, the state-run Anadolu Agency reported.

Ankara also conveyed its "strong reaction" to another demonstration held on the same day in Stockholm, the agency quoted anonymous Turkish diplomatic sources.

Finland and Sweden's NATO bid was initially blocked by Türkiye, which accused them of supporting anti-Türkiye groups as they rejected Ankara's extradition requests for suspects affiliated with the Kurdistan Workers' Party and the Gulen Movement

"In this context, our expectation that the perpetrators of the incident will be identified, necessary legal and judicial measures will be taken, and concrete steps will be taken in light of the commitments recorded in the tripartite memorandum have been emphasized," said the sources.

Finland and Sweden's NATO bid was initially blocked by Türkiye, which accused them of supporting anti-Türkiye groups as they rejected Ankara's extradition requests for suspects affiliated with the PKK and the Gulen Movement.

On June 28, Türkiye, Sweden and Finland agreed on a memorandum of understanding (MoU) before Ankara lifted its veto ahead of the NATO Madrid summit.

In the MoU, Finland and Sweden pledged to support Türkiye's fight against terrorism, and agreed to address Türkiye's "pending deportation or extradition requests of terror suspects expeditiously and thoroughly."

The PKK, listed as a terrorist organization by Türkiye, the United States and the EU, has been rebelling against the Turkish government for more than three decades.

The Gulen Movement is led by and named after the US-based Muslim preacher Fethullah Gulen. The Turkish government accuses the movement of masterminding the 2016 failed coup in which at least 250 people were killed.