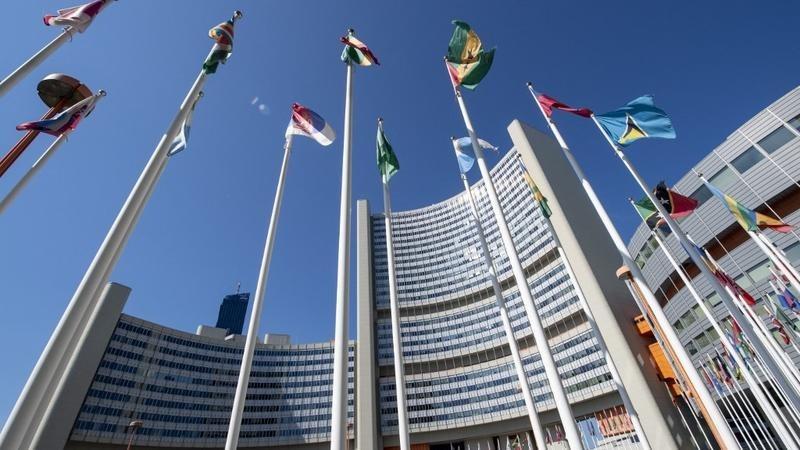 n this file photo, international flags flutter outside of the UN headquarters during the opening of the International Atomic Energy Agency Board of Governors meeting at the IAEA headquarters in Vienna, Austria on Sept 10, 2018. (JOE KLAMAR / AFP)

A report written by leading Chinese nuclear security researchers urged the global community to use an upcoming global conference on nuclear nonproliferation to deter the collaboration of the United States and the United Kingdom to transfer weapons-grade nuclear materials through nuclear-powered submarines to Australia.

The US, Britain and Australia should "stop taking double standards" and halt their collaboration on nuclear-powered submarines, reads the research report issued on Wednesday in Beijing.

"The international community should take action to urge the AUKUS countries to revoke their wrong decision, and jointly safeguard the integrity, authority and effectiveness of the international nuclear nonproliferation regime," according to the report.

The research report is the first of its kind made by Chinese think tanks focused on the collaboration of the three nations, and it offers abundant evidence and data to prove how the AUKUS countries－Australia, the UK and the US－affect the international nuclear nonproliferation system and stir up the arms race, Foreign Ministry spokesman Wang Wenbin said on Wednesday.

The report is the latest proof that the international community's concerns on AUKUS collaboration "are well-founded by facts", he added.

Washington, London and Canberra built the AUKUS trilateral security partnership last year. That prompted anger within and outside the Asia-Pacific region as they announced a plan to allow Australia to purchase nuclear-powered submarines from the UK.

The plan is high on the agenda of the 10th Review Conference of the Parties to the Treaty on the Non-Proliferation of Nuclear Weapons, which is scheduled to open in New York on Aug 1.

The conference, a top-level global meeting that aims to prevent a nuclear arms race and checks on the status quo of nuclear materials around the world, has been delayed for two years due to the COVID-19 pandemic.

"The weapons-grade nuclear materials to be transferred to Australia by the two countries would be sufficient to build as many as 64 to 80 nuclear weapons," said Zhao Xuelin, a leading engineer at the China Institute of Nuclear Industry Strategy.

Such a move would be in "serious violation" of the objectives and purpose of the nonproliferation treaty and would cause enormous harm, he said.

ALSO READ: AUKUS a threat to peace in the Asia-Pacific

"Washington has been busy building up blocs and small circles like AUKUS to shore up its overwhelming advantage in military areas and secure its hegemony in the Asia-Pacific and the whole world," said Liu Chong, director of the Institute of International Security of the China Institutes of Contemporary International Relations.

"Such moves have run counter to many countries' need to seek common security. The trilateral bloc's members seek their own security at the cost of the other countries, sabotaging global security," he added.

Zhang Yan, president of the China Arms Control and Disarmament Association, noted that the AUKUS partnership is a new political and military alliance that serves the US' "Indo-Pacific Strategy", which aims to provoke regional confrontation and step up a geopolitical zero-sum game.

The submarine purchase, if realized, "will be the first time" after the Nuclear Non-Proliferation Treaty went into force in 1970 that nuclear weapon states transfer tons of weapons-grade nuclear materials to a non-nuclear-weapon state, Zhang said.

"The US, the UK and Australia should seriously respond to the concerns of the international community and earnestly fulfill their obligations under international law," he added.

Such a "blatant act of nuclear proliferation" has triggered widespread concern and criticism from the international community, he added.