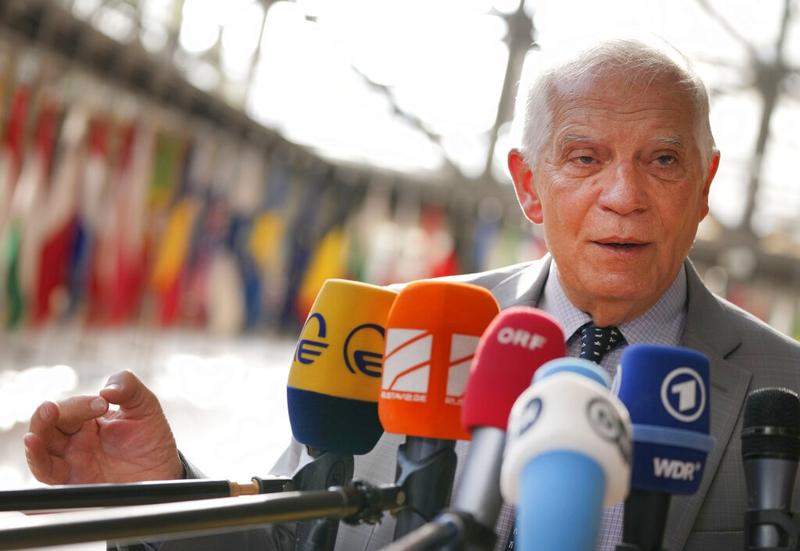 European Union foreign policy chief Josep Borrell speaks with the media as he arrives for a meeting of EU foreign ministers in Brussels on on July 18, 2022. (VIRGINIA MAYO / AP)

Josep Borrell, the EU's foreign affairs and security chief, told a news conference in Brussels after a meeting of the Foreign Affairs Council that the foreign ministers of the national governments also agreed to tighten the sanctions against Russia and close loopholes in the current measures.

The decisions were announced after a video briefing on developments in the Ukraine crisis by Ukrainian Foreign Minister Dmytro Kuleba.

With the additional 500 million euros in military aid, the total military assistance allocated by the EU to Ukraine amounted to 2.5 billion euros since the start of the Russia-Ukraine conflict

Borrell said the ministers "unanimously agreed" on the need to continue to stand firmly with Ukraine.

Borrell confirmed that the ministers also discussed a European Commission proposal to ban imports of Russian gold and amend the extension of sanctions. He said the member states' ambassadors will discuss the proposals this week.

Kuleba on Monday welcomed the EU's decision to provide the additional 500 million euros, comprising the fifth tranche of EU military aid for Kyiv, under the bloc's European Peace Facility.

"Weapons: grateful for the extra 500 million euros under the EPF," Kuleba tweeted.

He called on the EU to provide additional military assistance for Ukraine and step up sanctions against Russia, which could include an energy embargo, a price cap on oil, and a ban on Russian TV channels.

With the contribution, the total military assistance allocated by the EU to Ukraine amounted to 2.5 billion euros since the start of the Russia-Ukraine conflict.

The EU is struggling at a time of surging inflation, runaway energy and food prices and the continued impact of the pandemic.

This week could be pivotal for European countries concerned about the impact of the conflict and related sanctions on gas supplies.

Russia is due to reopen its main natural gas pipeline to Germany, Nord Stream 1, in the coming days after regular maintenance.

Russian energy giant Gazprom, which operates the pipeline, has told customers in Europe it cannot guarantee gas supplies because of "extraordinary" circumstances, according to a letter seen by Reuters. 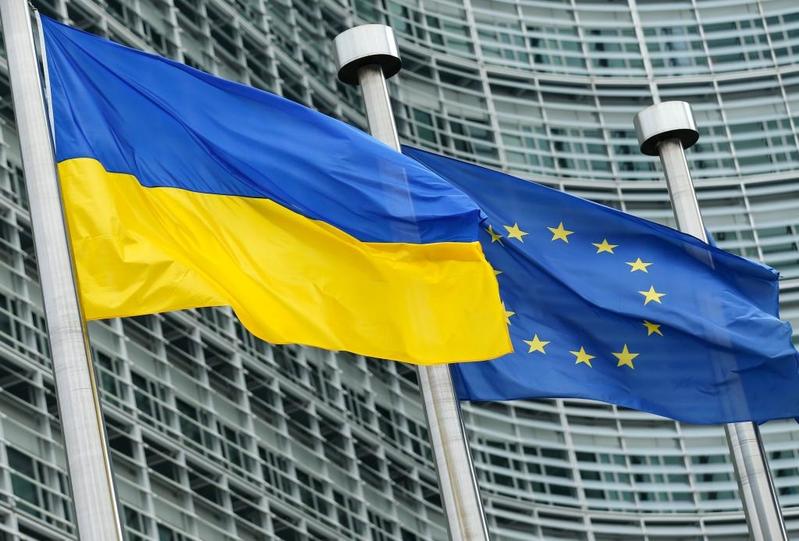 Photo taken on May 24, 2018 shows flags of Ukraine and European Union outside the European Commission headquarters in Brussels, Belgium. (YE PINGFAN / XINHUA)

European Commission President Ursula von der Leyen was in Azerbaijan to clinch a deal with President Ilham Aliyev on increased gas supplies from the country. With the tentative agreement, the EU wants to double its gas imports from Azerbaijan within half a decade

On Monday, France and the United Arab Emirates signed an agreement on energy cooperation to ensure oil and natural gas supplies from the Gulf country.

The same day, European Commission President Ursula von der Leyen was in Azerbaijan to clinch a deal with President Ilham Aliyev on increased gas supplies from the former Soviet republic. With the tentative agreement, the EU wants to double its gas imports from Azerbaijan within half a decade.

As the West and Russia move further apart, a court in Moscow on Monday announced a fine of 21.077 billion roubles ($369 million) against US search giant Google for its repeated failure to delete content prohibited in Russia.

The fine amounts to one-tenth of the revenue of Google and its affiliated companies registered with the tax authorities in Russia. The ruling has not entered into force and the US company can appeal.

Google-owned YouTube "purposefully contributes to the distribution of unreliable information about the progress of the (Russian) special military operation in Ukraine; materials promoting extremist views and the ideology of terrorist organizations" among other things, Russia's telecom watchdog Roskomnadzor said in a statement last month.

Russian President Vladimir Putin on Monday vowed to overcome the "colossal" high-tech problems his country is facing due to Western sanctions over Ukraine.

The Kremlin chief said the West had deployed sanctions to cut off Russia from high-tech products in order to contain the country's development.

Putin said that Russia would overcome "any difficulties" if it makes high tech a major focus of its development.