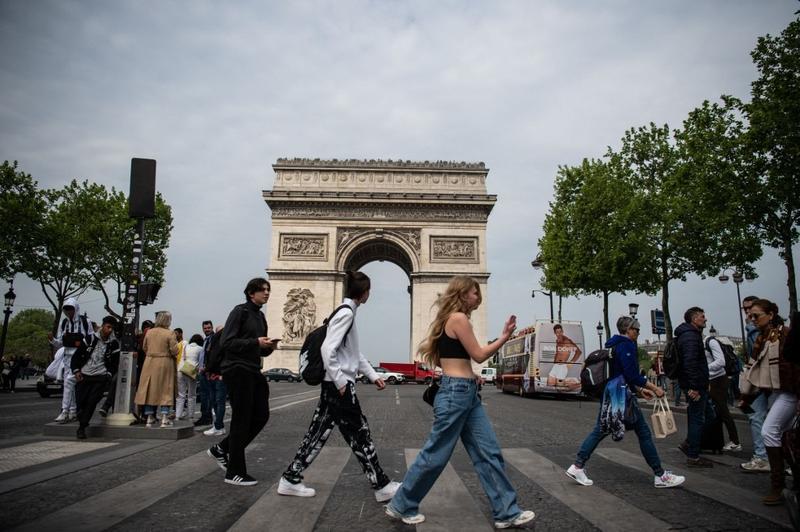 Pedestrians cross the streets on the Champs-Elysee avenue in front of the Arc de Triomphe monument in Paris on April 29, 2022. (PHOTO / AFP)

BRUSSELS – The Russia-Ukraine conflict and the resulting surge in energy and commodity prices will slash euro zone economic growth this year and in 2023, while boosting inflation to record levels, the European Commission forecast on Monday.

The Commission cut its growth forecast for the 19 countries sharing the euro to 2.7 percent this year from 4.0 percent predicted only in February, shortly before the conflict in Ukraine started. Growth will then slow to 2.3 percent next year, also below the 2.7 percent seen before.

The forecast is the first comprehensive estimate of the economic cost of the conflict in its neighbor for the euro zone and the wider 27-nation EU.

The European Commission cut its growth forecast for the 19 countries sharing the euro to 2.7 percent this year from 4.0 percent predicted only in February, shortly before the conflict in Ukraine started. Growth will then slow to 2.3 percent next year, also below the 2.7 percent seen before

The outlook for the EU economy before the conflict was “for a prolonged and robust expansion” but the crisis “has posed new challenges, just as the Union had recovered from the economic impacts of the pandemic," the Commission said in a statement.

By exerting further upward pressures on commodity prices, causing renewed supply disruptions and increasing uncertainty, the conflict is exacerbating pre-existing headwinds to growth, which were previously expected to subside, it added.

The Commission said the European economy would be hit even more severely if Russia were to cut off gas supplies to the EU, estimating such a development would reduce the projected growth by 2.5 percentage points in 2022 and 1 percentage point in 2023. That would set off a recession, it said.

The scenario of an abrupt cut-off by Russia of gas supplies would boost inflation by an additional 3 percentage points in 2022 and an extra 1 percentage point in 2023, the Commission said.

Uncertainty around the outlook has clearly increased and risks have tilted to the downside and are predominantly related to the duration of the conflict, EU Economic Commissioner Paolo Gentiloni told a news conference.

Despite government spending to cushion surging energy prices and support millions of refugees from Ukraine, the aggregate EU government deficit should fall in 2022 to 3.6 percent of GDP from 4.7 percent in 2021 as temporary COVID-19 support measures are withdrawn. It should fall to 2.5 percent in 2023, the Commission said.

Also, despite the slower growth, euro zone unemployment is to fall further to 7.3 percent of the workforce this year and to 7.0 percent in 2023 from 7.7 percent in 2021.