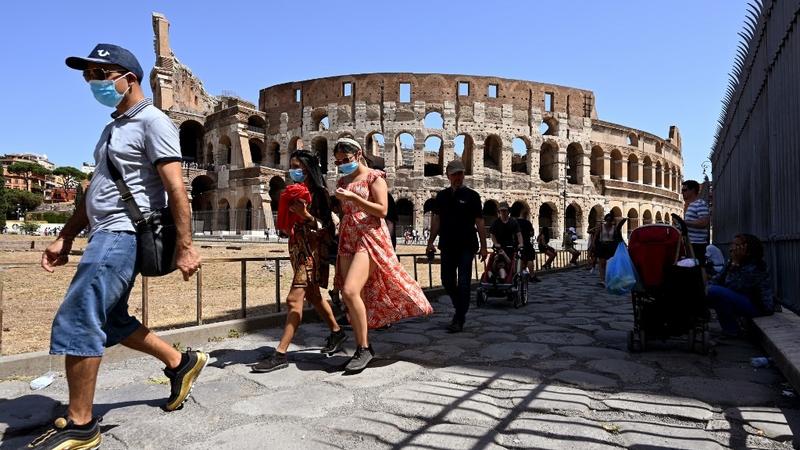 Tourists, some wearing a face mask, walk by the Colosseum monument in Rome on Aug 22, 2020, amid the COVID-19 pandemic. (VINCENZO PINTO / AFP)

Italy became the seventh country to officially surpass 20 million cases, according to World Health Organization data. Those with more official cases are the United States, with more than 90 million official cases, followed by India, Brazil, France, Germany and Britain.

All those totals are almost certainly dramatic undercounts, since they do not include at-home tests or those cases that went undiagnosed or otherwise unreported.

The milestone is just the latest in a series of such pandemic-related milestones for Italy, which has been among the hardest-hit countries since the start of the pandemic.

COVID-19 cases in Italy are on the rise again in recent weeks, with the daily infection regularly topping 100,000. But the mortality rate and the number of patients in intensive-care units is far below highs from earlier in the pandemic.

A worker in protective gear stands at the entrance of a cinema hall in Tunis, Tunisia, on June 14, 2020 as cinemas across the country reopened after being closed for over three months due to the COVID-19 pandemic. (ADEL EZZINE / XINHUA)

The 56th International Festival of Carthage has come back to Tunisia after a two-year hiatus due to the COVID-19 pandemic, and when a new wave of infections is striking across the country.

The FIC has been a well-known musical event held in Tunisia since 1964. It takes place in July and August every year, with all shows performed in the Roman theatre of Carthage, a restored ancient theatre located on the outskirts of the capital.

Tunisia is struggling to bring tourists back, but with the reopening of borders and the resumption of various festivals, the health situation in the country is worrying.

In the week from July 4 to 10, Tunisia reported 21,872 infections and 56 fatalities, raising the total tally of cases to 1,087,030 and the death toll to 28,823 in the North African country, the Tunisian Health Ministry said in a statement.