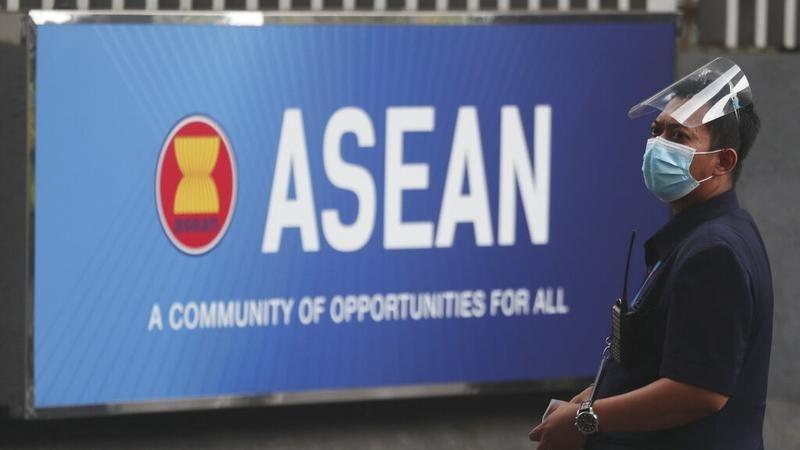 Speaking after delivering a speech at the ASEAN secretariat on upholding open regionalism, Wang said China and ASEAN are the world's second and fifth largest economies, respectively, whose aggregate economy has surpassed one-fifth of the world's total, contributing to more than 30 percent of the global economy and making them two important engines for global economic recovery.

Wang said China and ASEAN are the world's second and fifth largest economies, respectively, whose aggregate economy has surpassed one-fifth of the world's total, contributing to more than 30 percent of the global economy and making them two important engines for global economic recovery

To secure global economic recovery, Wang said, the first priority is to overcome the impact of the COVID-19 pandemic at an early date.

China and ASEAN members have conducted fruitful cooperation in fighting the pandemic and became the first group of countries that successfully brought the pandemic under control, which created necessary conditions for rapid economic recovery and also offered valuable confidence for the rest of the world, Wang said.

Wang noted that to boost global economic recovery, countries should focus on development and cooperation. In a turbulent international landscape, the focused endeavor of China and ASEAN countries to seek development is an important contribution to the global economy.

Global economic recovery should be in line with the trend of globalization, which also calls for the stable operation of the industrial and supply chains, as well as liberalization and facilitation of trade and investment. In the headwinds against globalization, China and ASEAN have been holding fast to their positions, Wang said.

He pointed out that global economic recovery needs a new impetus for growth. To echo the historical trend of the fourth technological revolution, China and ASEAN have deepened cooperation in digital and green economies with rapid progress achieved in e-commerce cooperation, benefiting the two peoples and leading East Asia to become the world's fastest-growing market of digital economy.

China is ready to work with ASEAN to jointly build the high-quality "Belt and Road" and promote high-level cooperation between the two sides, so as to benefit the two peoples and contribute to a rapid and strong recovery of the world economy, Wang concluded.

Wang also said the development of China-ASEAN relations has entered the "fast lane" with fruitful results achieved in bilateral cooperation.

He said China and ASEAN are always good neighbors, good friends and good partners with a shared future.

Over the past 10 years, thanks to the strategic guidance and personal commitment of leaders of China and the ASEAN countries, China-ASEAN relations have entered the "fast lane" and made accelerating progress, he noted.

The most encouraging development was that China-ASEAN relations have stayed ahead in many areas, Wang said.

"My ASEAN colleagues have told me that among ASEAN's dialogue partners, China has the most vibrant and productive ties with ASEAN," Wang said.

The most touching event was China and the ASEAN countries have been standing together in solidarity to fight COVID-19, he added.

When China was hit by the coronavirus, the ASEAN countries immediately expressed solidarity and support, and donated in cash and in kind to help China tide over the trying time.

When the ASEAN countries were affected by the pandemic, China did its best to help ASEAN nations fend off the virus, including sharing COVID-19 response experience without reservation and providing timely vaccine assistance.

"Our cooperation against COVID-19 was a vivid testament to our deep friendship through thick and thin. Together, we have set a good example of working together to beat the virus," Wang said.

The most heartening progress was the thriving economic cooperation and trade between China and ASEAN, he pointed out.

China and ASEAN are each other's largest trading partner. Bilateral trade volume has soared 100 times from 30 years ago and the two-way direct investment has exceeded $310 billion.

The China-Laos Railway is operational. Good progress has been made in the Jakarta-Bandung High-Speed Railway, the China-Thailand Railway, the China-Malaysia and China-Indonesia "twin industrial parks", and a number of other Belt and Road projects, he noted.

The most gratifying achievement was that China-ASEAN security cooperation has been making steady progress, Wang said.

The situation on the sea has remained stable on the whole, and there has been no problem with the freedom of navigation and overflight. Military and security exchanges have deepened, and fruitful cooperation has been carried out in non-traditional security areas, such as counter-terrorism, climate response, cybersecurity, combating transnational crime and disaster preparedness and reduction, he noted.