Djokovic in seventh heaven after starring role in Kyrgios Show 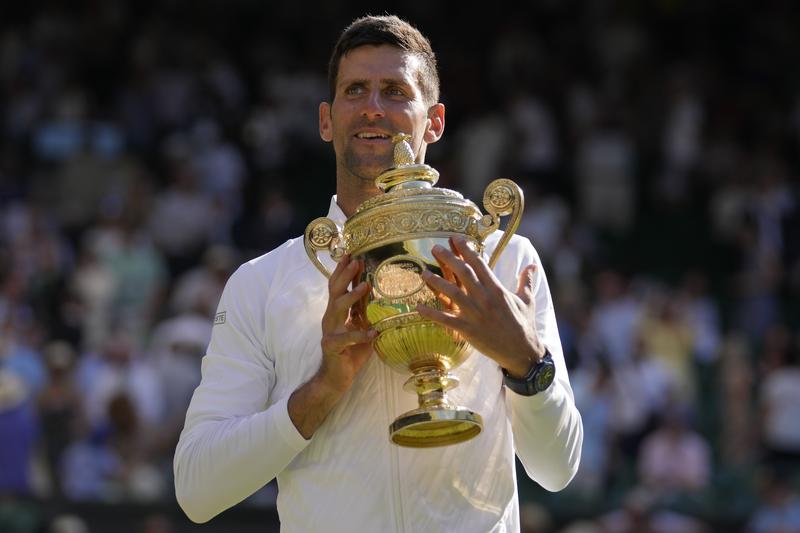 Serbia's Novak Djokovic holds the winners trophy as he celebrates after beating Australia's Nick Kyrgios to win the final of the men's singles on day fourteen of the Wimbledon tennis championships in London, July 10, 2022. (ALASTAIR GRANT / AP)

LONDON - The Nick Kyrgios show made must-see viewing for everyone at Wimbledon on Sunday except one man — Novak Djokovic refused to get sucked in by the hullabaloo going on on the other side of the net as he zoned in on hoisting the Challenge Cup for a seventh time.

In a career spanning almost two decades, there is almost nothing the Serbian had not weathered during his previous 31 Grand Slam finals.

During that time he took on 11 different rivals, from Roger Federer in 2007 to Daniil Medvedev last year, but it is safe to say that in all those finals he had never witnessed anything like the theatrics that were going on in Kyrgios's corner.

In fact, in the 134 previous editions of the grasscourt championships, the prim and proper establishment of the All England Club had never seen anything like it on final's day either.

There was a cheeky underarm serve, there were plenty of tweeners and of course there was a continuous flow of verbal sparring with himself, his entourage and the umpire.

The distractions were aplenty but it was soon clear why Kyrgios described Djokovic as "a God". He remained serene throughout the three hour commotion to ensure he was the one celebrating a 21st Grand Slam title by once again nibbling on some Centre Court grass.

Incredibly the 4-6 6-3 6-4 7-6(3) triumph was his 28th successive win at Wimbledon and also meant that Djokovic has not lost on Centre Court since being beaten by Andy Murray in the 2013 final.

Like superman in full flight, he swooped on to the threadbare Wimbledon grass on his belly to continue his celebrations, the relief clear for all to see after a tumultuous six months when his pursuit of becoming the most successful champion in men's tennis was halted in Melbourne due to his refusal to get vaccinated against COVID-19. 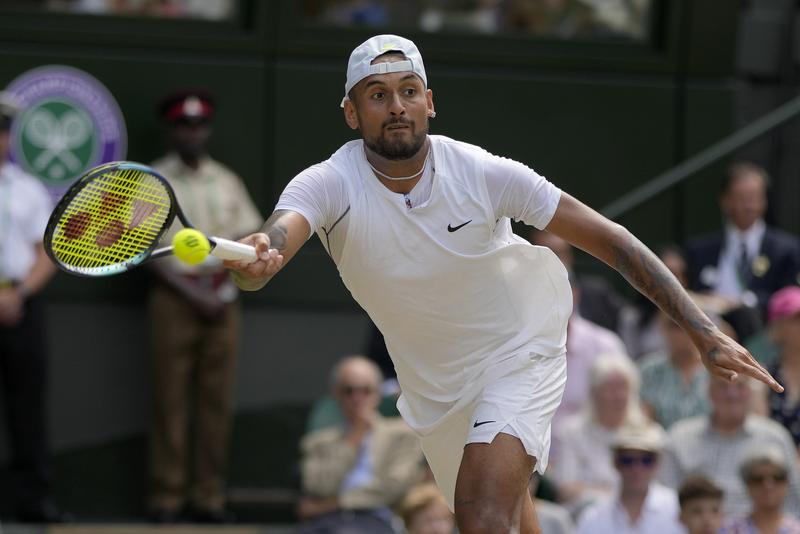 Australia's Nick Kyrgios returns to Serbia's Novak Djokovic in the final of the men's singles on day fourteen of the Wimbledon tennis championships in London, July 10, 2022. (ALASTAIR GRANT / AP)

"It's no coincidence that this place has such relevance in my life and career. It's a relief, as well, considering what I've been through this year. It adds more value and more significance and more emotions," explained Djokovic after taming Kyrgios for the first time in three meetings.

Djokovic had started 2022 tied on 20 Grand Slam titles with fellow Big Three rivals Federer and Rafa Nadal. The Serbian had been heavily tipped as the one who would break that deadlock at the Australian Open considering he owns a men's record eight titles at the season's opening slam.

But his Australian odyssey ended in chaos, with the Serbian held in an immigration detention center for five days before being deported from the country on the eve of the hardcourt major.

"Certainly this year has not been the same like last years. In the first several months of the year I was not feeling great generally. Mentally, emotionally, I was not at a good place," said the 35-year-old, who is now one title shy of Federer's men's record haul of eight at the grasscourt major.

"Once I left Australia... (it) caused turbulence inside of me. I just needed time to weather the storm.

"Wimbledon historically has always come at such important stages of my life and my career. In 2018 when I was starting the year with elbow surgery... this was the first slam that I won and (it) served as a springboard for (winning the next two majors at) the US Open and 2019 Australian Open. I'm always inspired to play my best tennis in London."

After Nadal captured the season's first two majors to take his haul to 22, Sunday's victory allowed Djokovic to close that gap with his great rival.

READ MORE: Djokovic ready to take on crowd and Norrie as Kyrgios awaits 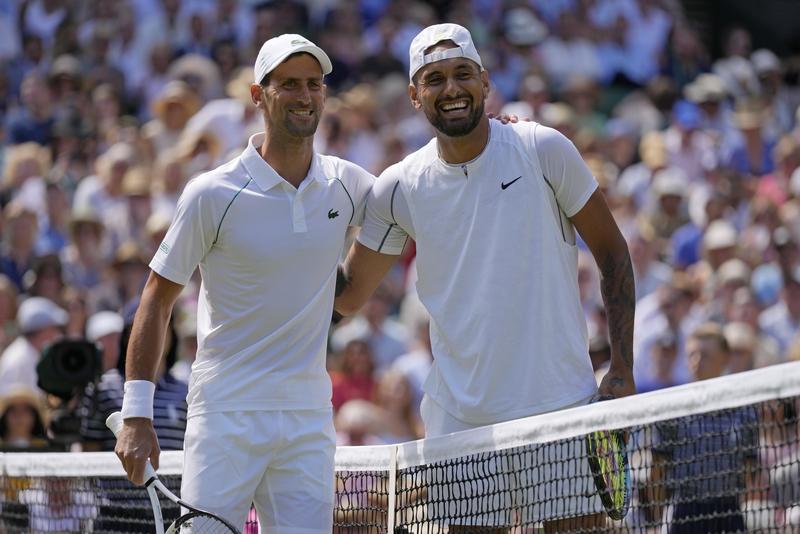 Australia's Nick Kyrgios (right) and Serbia's Novak Djokovic pose for a photo at the net before the final of the men's singles on day fourteen of the Wimbledon tennis championships in London, July 10, 2022. (ALASTAIR GRANT / AP)

With mission completed at Wimbledon, the Serb has no idea how the rest of the year will pan out for him considering at the moment he cannot enter the US without being vaccinated.

Hence the Serbian may not appear in another slam again until next May's French Open because as it stands, he will also be barred from competing in Australia in January - thus denting the Serb's hopes of topping the all-time list of men's Grand Slam champions.

"I'm not vaccinated and I'm not planning to get vaccinated so the only good news I can have is them removing the mandated green vaccine card or whatever you call it to enter United States or exemption.

"I'll wait hopefully for some good news from USA because I would really love to go there. If that doesn't happen, then I have to see what the schedule will look like."