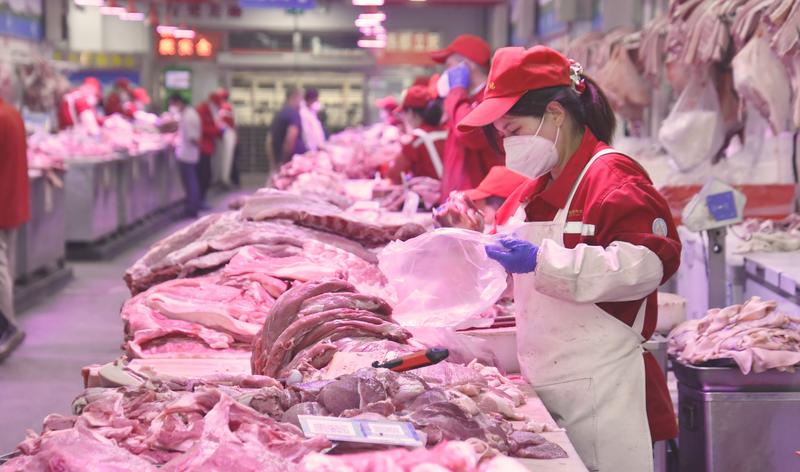 China's continued efforts to curb rising pork prices and crack down on market misconduct and irregularities will help stabilize the market and keep overall prices within a reasonable range this year, according to experts.

They believe China is capable of meeting its annual target of around 3 percent consumer inflation for 2022, which leaves room for more policy stimulus to shore up growth.

Their remarks came after the National Development and Reform Commission, the country's top economic regulator, said on Tuesday that it is considering releasing pork from central reserves and guiding localities to release extra stocks in a timely manner to prevent sharp increases in hog prices.

Prices of pork, a staple meat in China, have been rising quickly in recent weeks. The Ministry of Agriculture and Rural Affairs said the average wholesale price of pork in China hit 28.51 yuan ($4.25) per kilogram on Wednesday, up 6.8 percent from a day earlier and 27 percent from a year ago.

Liu Zhicheng, director of the commodity market division at the Chinese Academy of Macroeconomic Research's market and price institute, said at a symposium held by the National Development and Reform Commission on Wednesday that China is the world's largest producer and consumer of pork. Thus, keeping price stability in the pork and hog markets will help keep overall prices reasonable and ensure stable economic operations.

Liu attributed the recent hog price hikes to factors including some producers' reluctance to sell hogs that are ready for the market.

Zhou Lin, an associate research fellow at the Ministry of Agriculture and Rural Affairs' Institute of Food and Nutrition Development, said recent price rises were a result of multiple factors like a bullish mood about rising hog prices, transportation disruptions due to heavy rains and a fall in imports.

Despite the recent price hikes, Liu said there is insufficient room for further hog price gains in the coming months considering factors such as China's sufficient supply of hogs, slowing pork consumption in July and August and the recent pig feed price declines.

Looking ahead, he said China is capable of meeting its annual consumer inflation target for 2022, and the government will take solid steps to stabilize supplies and prices.

In fact, compared with soaring prices in other major economies, China's overall price level is within a controllable range.

China's consumer price index, the main gauge of inflation, rose 2.1 percent year-on-year in May, unchanged from April, said the National Bureau of Statistics. Meanwhile, inflation hit a 40-year high in May in the United States, as the CPI there rose 8.6 percent year-on-year, according to official figures.

The NBS said China's producer price index, which gauges factory-gate prices, increased 6.4 percent year-on-year in May, rising at the slowest pace since March 2021.

The NDRC's Department of Price recently held a symposium with the Dalian Commodity Exchange to study efforts to ensure stable supplies and prices in the live hog market, the commission said in a statement on Tuesday.

In the next step, the two sides will work with relevant parties to strengthen regulation of the futures and spot markets and crack down on illegalities and irregularities such as spreading false information, hoarding, price gouging and speculation in the market to maintain normal market order, the NDRC said.