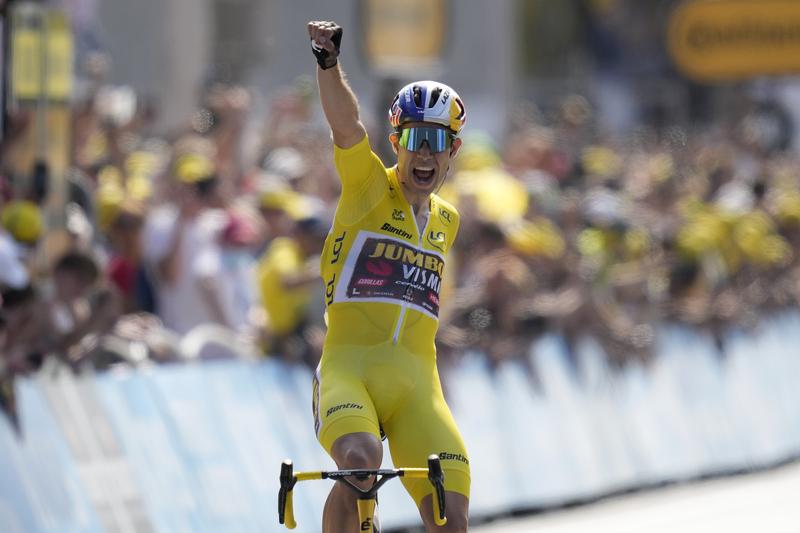 CALAIS, France - Wout van Aert extended his overall lead in the Tour de France when he finished off some sterling team work to win the fourth stage on Tuesday, having finished second on the opening three race days.

Wout van Aert left all his rivals gasping for air on the final hill of the 171.5-km ride from Dunkirk after his Jumbo Visma team's brutal acceleration blew apart the peloton

The Jumbo Visma rider left all his rivals gasping for air on the final hill of the 171.5-km ride from Dunkirk after his Jumbo Visma team's brutal acceleration blew apart the peloton.

The Belgian jumped away from a skimmed pack with less than 12km left in the short ascent of the Cote du Cap Blanc Nez and never looked back to clinch his seventh individual stage win on the Tour.

"Usually it's third time lucky, but it was fourth time for me but that's also good," said Van Aert.

"It's outstanding because these stages usually end in a bunch sprint, it's almost impossible to win solo."

France's Anthony Perez and Dane Magnus Cort Nielsen formed the day's breakaway and built a decent lead but it was never going to stick as the sprinters' teams controlled the gap.

A brutal acceleration by the Quick Step Alpha Vinyl team split the bunch after the descent of the Cote de Cassel, some 130km from the finish.

The peloton quickly regrouped, however.

The sprinters' teams upped the pace midway through the stage and the leading duo's seven-minute advantage started to melt.

The stage really came to life when Van Aert's team mates went full gas in the last short climb of the day before the Belgian went solo.

Briton Adam Yates and last year's runner-up Jonas Vingegaard were the last to be dropped before being caught by the rest of the bunch.

Philipsen was the fastest of the chasers and, unaware that Van Aert was on his own in front, bumped his chest in celebration when he won the sprint, only to be notified by Laporte that someone else had already crossed the line.

Wednesday's fifth stage is a grueling 155-km ride from Lille to Arenberg featuring almost 20km of cobbled roads - the same used on the Paris-Roubaix classic, also known as the 'Hell of the North'.

READ MORE: Mercurial Kyrie sticking with Brooklyn for another year

The top contenders will be looking to avoid trouble on tricky terrain that favors the heavier riders and Van Aert will again be one of the favorites.