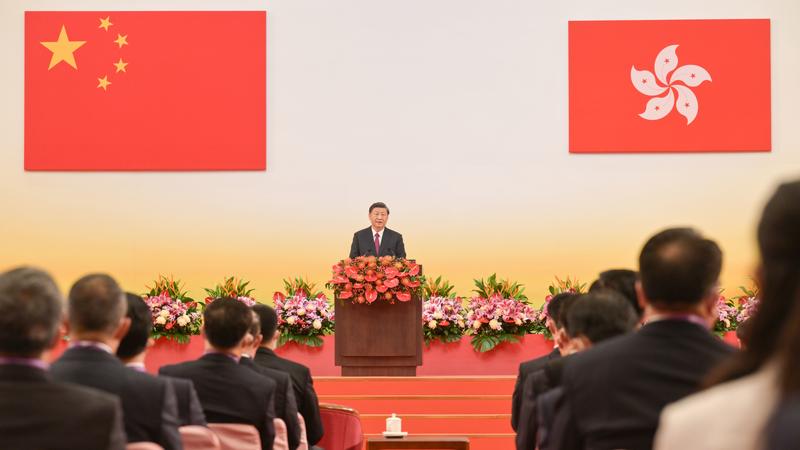 President Xi Jinping delivers a speech at the swearing-in ceremony of the sixth-term government of the Hong Kong Special Administrative Region at the Hong Kong Convention and Exhibition Centre, July 1, 2022. (PHOTO / HKSAR GOVERNMENT)

BEIJING - President Xi Jinping on Friday made an address at the meeting celebrating the 25th anniversary of Hong Kong's return to the motherland and the swearing-in ceremony of the sixth-term government of the Hong Kong Special Administrative Region.

The speech by Xi, also general secretary of the Communist Party of China Central Committee and chairman of the Central Military Commission, has elaborated the significance of adhering to the "one country, two systems" principle, and drawn a blueprint for a brighter future of Hong Kong, experts and professionals worldwide have said.

A better chance at development

"Since its return, Hong Kong, amid China's monumental reform and opening-up efforts, has been breaking new ground, functioning as an important bridge between the Chinese mainland and the rest of the world. As a result, it has made irreplaceable contributions to our country's economic miracle marked by long-term, stable, and rapid growth," Xi said in his speech at the meeting.

The speech by Xi, also general secretary of the Communist Party of China Central Committee and chairman of the Central Military Commission, has elaborated the significance of adhering to the "one country, two systems" principle, and drawn a blueprint for a brighter future of Hong Kong, experts and professionals worldwide have said

As part of China, Hong Kong has a very important role to play, Perry said, noting that the Guangdong-Hong Kong-Macao Greater Bay Area "will be the leading region in China."

Pui Jeng Leong, a media veteran in Brunei, said that he was impressed by Xi's speech at the celebration, adding that over the years, he has found that Hong Kong people are getting better at speaking Mandarin, and their recognition of the motherland is growing stronger.

Backed by the large mainland market and linked to international capital, Hong Kong's political, economic, social and business environment has further improved, laying a solid foundation for the city's future development, he said.

The Chinese president noted in his speech that "Be it the global financial crisis, the COVID-19 epidemic, or social unrest, none of them have stopped Hong Kong from marching forward."

Selcuk Colakoglu, director of the Turkish Center for Asia-Pacific Studies, said despite all the challenges, Hong Kong's social vitality and average life expectancy now rank among the highest in the world, and "Hong Kong's status as an international financial, trade and shipping center has been consolidated and enhanced."

ALSO READ: Xi has 'set the tone' for 'one country, two systems'

For Cavince Adhere, a Kenya-based international relations scholar, political stability is the foundation of progress. He said that by adopting the Hong Kong National Security Law and improving the city's electoral system, Hong Kong's stability has been further guaranteed.

This provides a strong platform for the city's greater integration with the rest of China, thus a better chance for Hong Kong's sustainable growth, said Adhere.

Stressing that "one country, two systems" "serves the fundamental interests of not only Hong Kong and Macao, but also the whole country and the nation," Xi said in his speech that "There is no reason for us to change such a good policy, and we must adhere to it in the long run."

Echoing Xi's words, Masood Khalid, former Pakistani ambassador to China, said Hong Kong's economic achievement and the fact that it is becoming comprehensively intergrated with both the Chinese mainland and the international market are a testament to the success of the implementation of "one country, two systems."

Citing the Hong Kong-Zhuhai-Macao Bridge, the Hong Kong section of the Guangzhou-Shenzhen-Hong Kong Express Rail Link, and the Guangdong-Hong Kong-Macao Greater Bay Area as examples, the former ambassador said that the central government of China has carried out a series of infrastructure projects for Hong Kong, from which the people of Hong Kong have benefited.

Xi has made it clear that Hong Kong will continue to make "contributions to the rejuvenation of the Chinese nation, and that Hong Kong's future is bright," said Kuhn.

President Xi's speech offered both encouragement and reassurance to Hong Kong, he noted.

"With the valuable support from the central government, I am certain that valuable opportunities for Hong Kong people and businesses will emerge, hence allowing Hong Kong to make positive strides towards emerging as an even stronger and more appealing business hub," Masud said.

"I'm optimistic about the future of Hong Kong," said Andrey Karneev, head of the School of Asian Studies at Russia's Higher School of Economics.

While retaining its speciality, Karneev said, Hong Kong will gradually discover new spheres of development, and could become a global art or design hub.

"Hong Kong has not only developed into a global financial center, but also a center attracting international talent," Lissovolik added.