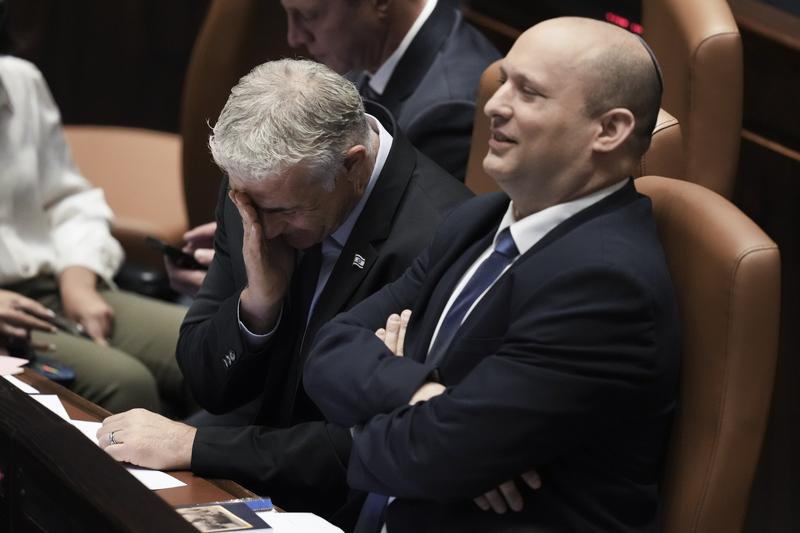 Israeli Prime Minister Naftali Bennett (right) and Foreign Minister Yair Lapid ahead of the vote on a bill to dissolve parliament, at the Knesset, Israel's parliament, in Jerusalem on June 30, 2022. (ARIEL SCHALIT / AP PHOTO)

The 120-member Knesset (parliament) voted 92-0 to dissolve and to hold the next elections on Nov 1, a parliamentary spokesperson said in a statement.

Bennett is expected to hand power to Foreign Minister Yair Lapid, leader of the centrist Yesh Atid party, under the power-sharing deal they agreed upon following inconclusive elections in 2021.

Lapid will officially become the caretaker prime minister on Friday and will hold the position until the next government is formed.

"I will continue to assist him as an alternate prime minister," Bennett said, adding he will "transfer the job in a professional and orderly manner."

Ayelet Shaked, Israeli interior minister and a member of Bennett's pro-settler Yamina party, will replace him as the leader of the party, Bennett noted.

The outgoing Israeli leader said the past year, marked by personal attacks against him and constant attempts to topple his government by the opposition led by former Prime Minister Benjamin Netanyahu, was "hard" for him and his family.

Bennett led a coalition made up of eight ideologically diverse parties, united with the aim of ousting Netanyahu who is facing a criminal trial over corruption charges.
READ MORE: Palestinian PM calls on EU to pressure Israel to stop violations

Israeli news outlets reported that Bennett was considering running in the forthcoming elections as he was under pressure from many of his supporters to stay in the race.