BUDAPEST - On a remarkable day for the Chinese diving team, the dominating power in the sport reached a milestone at the Aquatic FINA World Championships by winning its 100th diving gold at the Duna Arena in Budapest.

Only five hours later, the tally was improved to 102 as the unstoppable Chinese divers extended their perfect gold-winning record at the tournament with another two convincing victories on the springboard.

In the first final on Wednesday, teenage diving pair Quan Hongchan and Bai Yuming dominated in the mixed 3m and 10m team event for the 100th diving gold for China in the tournament's history, also the fifth in as many events in this year's edition

In the first final on Wednesday, teenage diving pair Quan Hongchan and Bai Yuming dominated in the mixed 3m and 10m team event for the 100th diving gold for China in the tournament's history, also the fifth in as many events in this year's edition.

"I'm so happy to win the gold, especially it was the 100th for the Chinese team," said the worlds debutant Bai, who contributed three dives including two from the 10m platform and one from the 3m springboard.

"The mixed team event is a little similar to the singles event, but I feel it was more difficult. I did better on the springboard, but for the platform, I was too nervous and it was just not so good," the 15-year-old boy added.

The duo sat in the top position from the first dive to the last, finishing with 391.40 points to secure the gold.

Olympic gold medalist Quan, also 15 years old, who replaced another Olympic champion Zhang Jiaqi to compete in the event, won her second medal, also her first gold, at the worlds.

"I was satisfied with my performance today, especially on the platform because it was my major event," said Quan, who was edged by fellow Chinese Chen Yuxi in the women's 10m platform on Monday.

"I was informed to replace my teammate to participate in the event yesterday, I was surprised but also very happy because I felt it was a chance to win one more medal," Quan added. 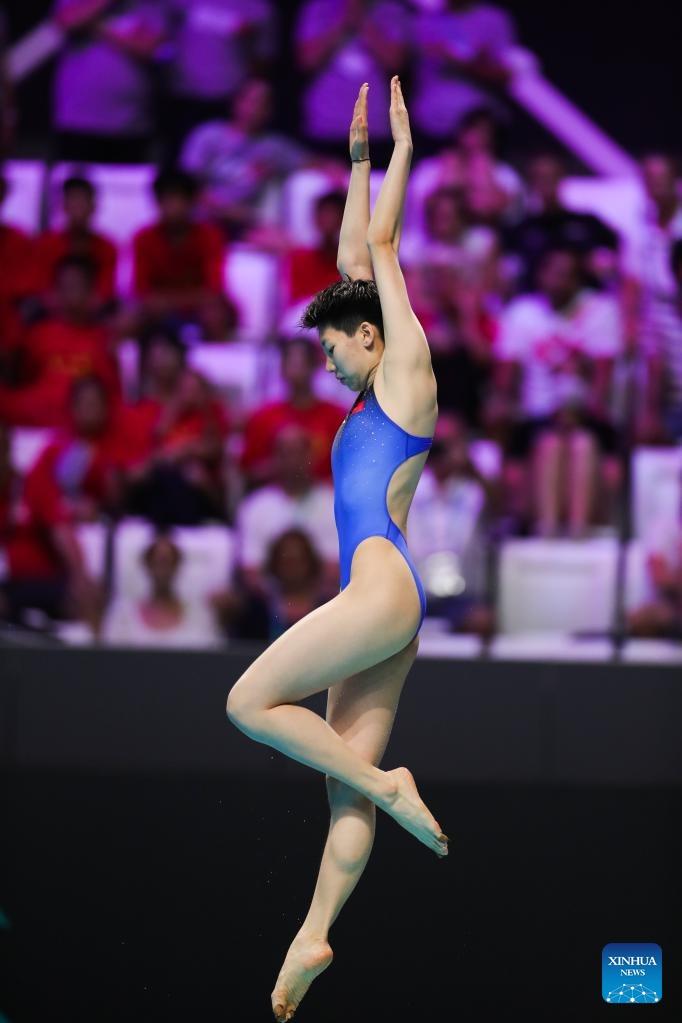 Powerhouse China has won 95 of the available 151 gold medals in diving in the tournament's history before coming to Budapest, which accounts for 63 percent of the total. Russia (excluding the Soviet Union) and the United States follow on 13 world titles each in the sport.

China collected at least one gold medal in diving in each of the last 14 world championships and won 12 of the 13 titles at the last edition of the tournament in 2019.

In the women's 1m springboard final, the 19-year-old Li came back from a poor third dive, after which she ranked second with 7.30 points behind Canada's Mia Vallee, to deliver two flawless dives in the fourth and fifth rounds to grab the gold with 300.85 points.

"I was a little nervous in the preliminary this morning since it was my first time at world championships," Li said.

"But some experienced teammates and coaches helped me a lot as they taught me how to get relaxed in the match," she added, mentioning that multiple Olympic champion Shi Tingmao has talked with her a lot about how to compete in the worlds.

Sarah Bacon of the US beat Vallee with the last dive to win a back-to-back worlds silver medal in the event with 276.65, only 0.05 ahead of the Canadian. The 25-year-old American finished with the same medal three years ago in Gwangju, South Korea, behind another Chinese diver Chen Yiwen.

Three-time Youth Olympic champion Lin Shan and worlds rookie Zhu Zifeng led in every round in the mixed 3m synchronized in the last final of the day to wrap up the seventh diving gold for China in the Hungarian capital.

"Both of us performed very well today, especially my teammate Zhu. It was his first international tournament, but he got no stage fright," said the 20-year-old Lin, who won her first worlds title three years ago in the mixed 3m and 10m team event.

The duo finished with 324.15 points to atop the standings, beating the second-placed Chiara Pellacani/Matteo Santoro of Italy by 30.60 points. British pair James Heatly/Grace Reid surpassed Mexican divers in the last round, in which they earned 71.61 points, to grab the bronze with a total of 287.61.