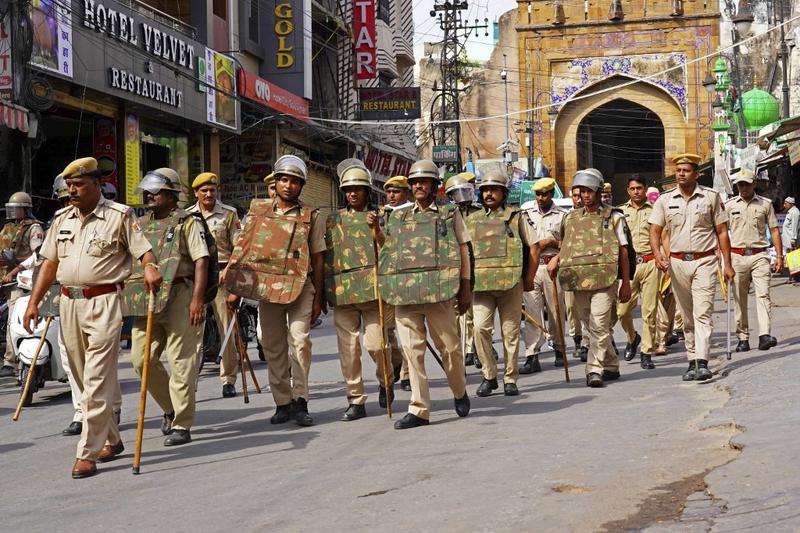 Policemen carry out a flag march through a street in Ajmer on June 29, 2022. (HIMANSHU SHARMA / AFP)

"We are under strict orders to prevent any form of protests or demonstrations scheduled to condemn the murder," Hawa Singh Ghumaria, a senior police officer in the northwestern state told Reuters on Wednesday, adding that the crime had sent "shockwaves through the country."

Brandishing a meat cleaver, two bearded men said in the video that they were avenging an insult to Prophet Mohammad caused by the victim.

Senior police officer Hawa Singh Ghumaria described the bloody attack on Kanhaiya Lal is his tailorshop in the city of Udaipur as "an act of terror", and said two suspects were being interrogated by federal investigators

They also alluded to Nupur Sharma, a former spokeswoman for the ruling Hindu nationalist Bharatiya Janata Party, whose remarks about the Prophet earlier this month triggered domestic and international outrage.

Ghumaria described the bloody attack on Kanhaiya Lal is his tailorshop in the city of Udaipur as "an act of terror", and said two suspects were being interrogated by federal investigators.

Two assailants slashed Lal's head and throat in an attack while he taking measurements, according to Bhawarlal Thoda, a city administrator in Udaipur.

According to Thoda, the tailor had been detained over a social media post in support of the BJP spokeswoman that was traced to his mobile telephone, and that after being released Lal had told police on June 15 that he was being threatened by some group.

Authorities said they had suspended Internet services in several parts of Rajasthan to prevent circulation of the video shared by the accused.

"The mood is tense and almost all shops are closed today," Thoda said. The city of around half a million people is one of the major tourist draws in the desert state, and is known for its luxurious hotels, including the famous Taj Lake Palace.

In another video clip posted online, one of the assailants also went on to threaten Prime Minister Narendra Modi, saying their blade would find him too.

India has a ghastly history of religious violence, and thousands of people have been killed since the country became independent from British colonial rule in 1947.

But, Modi's pursuit of a "Hindu first" agenda since coming to power in 2014 has stoked tensions in a country where Muslims account for around 13 percent of its 1.4 billion people.

Earlier this month the BJP suspended Sharma from the party and expelled another official but the furore has not died down.

"We can only urge people to stop sharing the video of the heinous crime committed in Rajasthan and put an end to rising communal tension," said a senior BJP official in New Delhi, requesting anonymity to avoid being drawn into the controversy.

Prime Minister Modi has not commented on the issue.